INDEPENDENCE: May the Fourth Be With You! 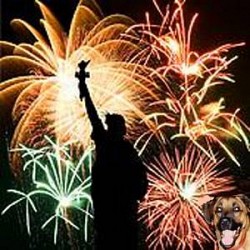 Here’s a good way to instill in your children patriotism and a love of America: Rent a patriotic movie or television program. The only trouble is that these days, those movies are few and far between.

These recent movies contain some strong subject matter, so caution or even extreme caution is warranted.

Honorable mention: THE PURSUIT OF HAPPYNESS (2006).

Read the review of THE PURSUIT OF HAPPYNESS.

, who wrestles with his desire for revenge and the just cause of the American War for Independence in the late 1700s. The cruel British Colonel Tavington, played impeccably by Jason Isaacs, shoots Ben’s 15-year-old son, Thomas, as Ben’s oldest son, Gabriel, is led away captive. Thus, Ben’s fury is unleashed, and taking his two youngest boys, he goes into the woods to fight a guerilla war, slaughtering the British and rescuing Gabriel. Ben continues to wrestle with his sinful desire for vengeance and the worthiness of the Revolutionary cause. Eventually, he sees that he needs to stay the course, and he rejects vengeance to take up the flag. The violent battle scenes may concern older moviegoers, while younger moviegoers might chafe at the soul-searching, but the heart of this movie is faith. Prayer runs throughout the film, and the Cross of Jesus Christ is lifted up. THE PATRIOT is also a terrific, engrossing movie. One can only hope that this soul searching and pain will lead many to search for the God to whom Ben prays so often in this story.

Read the Review of THE PATRIOT.

JOHN ADAMS is the acclaimed HBO TV miniseries on one of America’s most important founding fathers, and the second president of the United States, who led a glorious, mostly positive life of great influence. The acting, writing and direction are superb, and this miniseries is rich in political, philosophic and spiritual dialogue that recognizes Christian faith in every critical moment.

Read the Review of JOHN ADAMS

This is a great family movie about the patriotic career of Broadway star and composer George M. Cohen, who is played brilliantly by James Cagney in one of the greatest performances ever captured on celluloid. We defy any viewer to hold back a tear when Cohen hears soldiers singing his World War I hit “Over There” while marching off to war to fight Hitler in World War II. Cagney’s unique interpretation of dance, which he showed off to great effect in 1933’s FOOTLIGHT PARADE, is an awesome joy to behold.

When a Hollywood movie director goes searching for “real life,” he finds out that people need laughter and humor to lift up their spirits. Tired of making fluff, the director decides to do a serious movie, and to research it, he sets out with 10¢ in his pocket to experience life. During his journey he learns much about himself, and society, falls in love and arrives at an epiphany in a full gospel chapel. This is one of the best movies ever produced in Hollywood. Directed by the gifted screenwriter/director Preston Sturges, it has a near perfect balance of humor and pathos.

4. DRUMS ALONG THE MOHAWK

Action, drama, sentiment, humor deftly woven into the best Christian movie ever made so far about America’s War for Independence. It also is a wonderful portrayal of the American pioneer spirit. John Ford creates another masterpiece here, capturing the flavor of Colonial life in this vigorous, courageous story of settlers defending their liberty in upstate N. Y. during the Revolutionary War.

Another Frank Capra classic starring Jimmy Stewart, this movie demonstrates that the little guy can stand up to big government. A watershed movie for the common man, it serves as an example that Big Government will not crush the human spirit. It continues to sound a call for ethics, morality and integrity in our highest offices.

Based on the diary of Alvin York, the most decorated soldier in World War I, this moving story tells about a willful man, played by Oscar winner Gary Cooper, who comes to Jesus Christ and comes to terms with war. After his conversion, Alvin is deeply troubled about fighting in the war because he cannot reconcile the Bible’s teaching against killing with participating in a war to defend his country. Before making his final decision about filing for conscientious objector status, Alvin spends time reading the Bible and being alone with God on the mountain. There it becomes clear what God wants him to do. SERGEANT YORK is a great American movie; it’s also a great Christian movie.