Do Movies Lead You to Rome or Jerusalem? 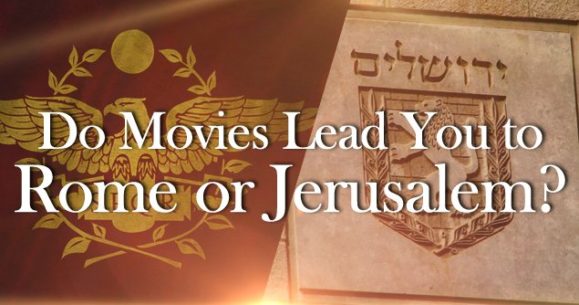 I believe a reasonable answer is that something that is deemed “Christian” is similar to how we deem something that is “holy.”  The definition of holy is something dedicated or consecrated to God for a sacred purpose.  Therefore, for our discussion, a movie that is deemed “Christian” is a movie that has been dedicated to God for a sacred purpose.  From it’s very inception, the movie is set apart to be used in a special way for God’s purposes.

Back in that film class, the question was raised, “Even if the film wasn’t originally set apart for God’s purposes. . . how do you explain stories where God used films to affect change in people’s lives?  Can God use those films too?”  For example, my professor told a story of when he was going through a tough time with his marriage.  He was contemplating divorce and starting a new life with a new woman to get away from his current problems.  He went to see a movie, which I will not name, but it was a secular Hollywood film, not what we would deem “Christian.”  As he watched this film, he told the class, he was overwhelmingly convicted by the Holy Spirit to return home and reconcile with his wife.  God used this movie and changed the direction of his life. Again we asked the question, can God use any film?  The conclusion was that any movie can lead you to Rome or Jerusalem.  Meaning it can lead you away from God (Rome) or closer to God (Jerusalem).

“For in him all things were created: things in heaven and on earth, visible and invisible, whether thrones or powers or rulers or authorities; all things have been created through him and for him.”   Colossians 1:16

“And we know that in all things God works for the good of those who love him, who have been called according to his purpose.” Romans 8:28

There is overwhelming evidence that one reason the power of visual mediums like films have is because it is our human nature to self-project and identify ourselves with the characters on screen.  As individuals, we all have unique life experiences and unique personalities that we carry into a movie theater.  As a story unfolds, we naturally project our life experiences onto the characters believing we are like the hero or the victim because of what has happened in our lives.  That’s how God can come in and use any story to connect with you.

Now, obviously that doesn’t mean we condone all movies or forms of entertainment.  We must be wise with what we put in front of our eyes and consume.  Phillipians 4:8 says, “Finally, brothers and sisters, whatever is true, whatever is noble, whatever is right, whatever is pure, whatever is lovely, whatever is admirable – if anything is excellent or praiseworthy – think about such things.”  Some movies are practically soft core porn that no Christian has any business watching, while others are so wholesome if someone has a problem with it they probably don’t watch movies anyway.  Taking the extremes away, you have to do some self-analyzing and determine what movies are good to consume.  The best question to ask is:  Will this movie lead me to Rome or to Jerusalem?

Editors Note:  Trey, a husband and father of four, has worked in both big media companies and in smaller entrepreneurial environments; marketing and producing film, television and new media content. He currently resides in Nashville, Tenn. and serves as head of LifeWay Films.