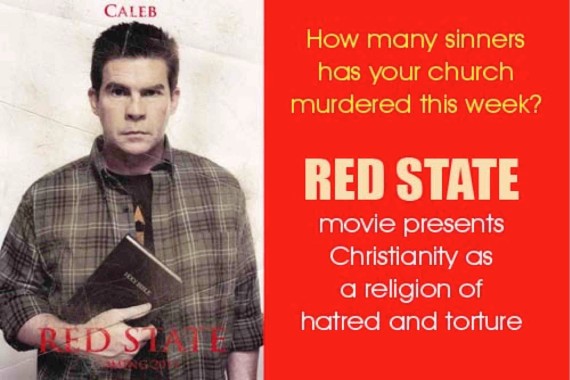 The movie RED STATE, which played at the Sundance Film Festival and is scheduled for a more full release in October, takes America’s most controversial church and turns it into a horror show slaughterhouse.

The Westboro Baptist Church and its pastor Fred Phelps are famous for picketing the funerals of soldiers killed in combat and for condemning homosexuality. His message and tactics are roundly opposed by most Christians who believe — while God does hate sin — He loves sinners.

In modern news terminology “Red State” refers to a state that votes Republican. Conservative Christians may well be the largest voting block in red states. While few Christians accept the message and methods of Fred Phelps, Smith’s pastor Cooper makes Phelps look like a choirboy. In doing so, he presents Christianity as a religion of raw hatred. It’s common in movies to present a villain as so vile that audiences long to see him get his due and the end of the move. In this movie, Christianity is the villain.

Smith is clearly not out to please general audiences. It appears he’s actually hoping to fill theaters with Christian-haters. He’s not likely to attract a huge audience. RED STATE will not be in 2011’s list of top 10 box office winners.

Most people who truly hate Christians do so because Christianity stands for righteousness and opposes sin. What Christian-haters don’t want to admit is that what Christianity is really all about is God’s love of sinners and His plan for setting sinners free. Jesus Christ didn’t go around crucifying sinners like pastor Cooper in RED STATE. He was crucified himself so that sinners could be forgiven. This was history’s ultimate act of love — not hatred.

Love is so central to Christianity that Jesus Christ instructed his followers to pray for, and even love, those who hate them. The truth is that those who love sin and hate Christians are spiritually blind. They don’t consider themselves blind and don’t appreciate being considered blind. The root of their anger is in the discomfort light causes to those who enjoy living in darkness.

If Kevin Smith had made a movie portraying a murderous American mosque in a shootout with the ATF he would be vilified by the media for his insensitivity. He might even have to think twice about vacationing in the Middle East. By choosing to attack Christians, we can hope he winds up on lots of prayer lists.