Are You Susceptible to the Mean World Syndrome???? 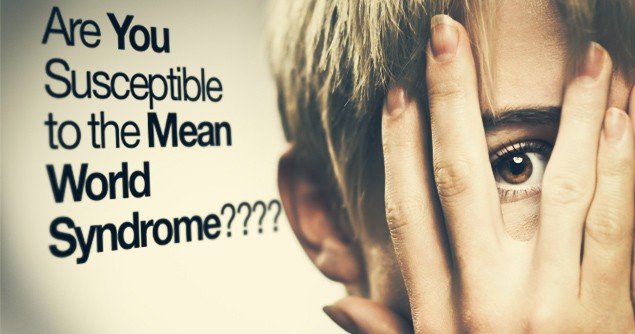 Are You Susceptible to the Mean World Syndrome????

Like other Americans, I know the feeling of being nervous to walk down a street at night. What if there’s a mugger hiding around the corner just waiting to attack the next innocent bystander? Maybe by accident I’ll walk into the middle of a drug deal and because I was a witness to this dirty deed, they’ll keep me as a hostage! Or, worse, they’ll shoot me dead and dump my body in the local river to tie up all the loose ends!

Fears of this nature seem like a reasonable thing, perhaps even natural. To be afraid for one’s own safety is in most cases a good thing: it helps keep us alive. This gut instinct is something for which we have been hard wired by God.

Being afraid of violent crimes in the world around us doesn’t seem to be out of the ordinary. In fact, the number of people who claim to be afraid of the dangers that surround them has increased steadily over the last decade or so.

Why would that be? Well, it seems logical to assume that it’s perhaps a result of the increased violence around us. If the United States is seeing an increase in violent crimes, then everyone should be more nervous about encountering one.

Funny thing, though: In the last 15 years, acts of violence in the country has seen a steady decrease.

A recent study found that, despite a safer world now in 2014 than there was in 1996, there are more people today who think that the world is a mean place fraught with danger. This increased distrust though does come from somewhere:  Television.

In the same space of time, 1996 to the present, the number of violent acts depicted on TV per hour has more than doubled. So, with an increase of the screen time that violence gets there has been an increase in the general public’s fear of the world around them.

In the 1960s and ‘70s, a man by the name of George Gerbner developed a social theory known as cultivation theory. The theory states that the more time a viewer spends immersed in a false televised “reality,” the more they believe that the real world functions the way it does on TV. Essentially, audiences glean their understanding of social reality from a televised fake reality.

So that is interesting for sure and if that was all to be said about the topic, it would be pretty easy to stop this article right here, and you, as the reader, could take away an interesting tidbit of information that you could use to help confirm the belief that things we watch do have a noticeable impact on the way we interact with our surroundings.

However, there’s still more to be learned from this information.

Gerbner, the brilliant man who developed this theory, actually went to Congress in 1981 to make them aware of his discoveries. He reasoned that, if the public believed the world is a more dangerous place than it really is, they will become more susceptible to a greater control by the government.

Think of it this way. If you believed that your life was in danger and a person or organization was able to keep you protected, you would probably let them have a greater control over your activities because it would mean they can protect you better. Gerbner was afraid that this finding could be used by any government to manipulate a populace into giving up their freedom in exchange for protection. NSA scandal, anyone?

Of course, this is clearly an extreme and somewhat bleak view of how televised violence could be used against unaware citizens, and in most situations these sorts of things would not actually lead to a massive all controlling Government. It is, however, good to note that this “Mean World Syndrome” could be used for the benefit of those with nefarious minds.

The U.S. has been making positive steps to decreasing the violence its citizens might encounter in our day-to-day lives. This is good. Sadly, this good news doesn’t seem to be having the effect it ought to have because the world we see on TV depicts so much violence that it’s convinced the audience America is filled with villainy lurking around every corner.