The Mass Media Shapes the Values That Elect the Politicians 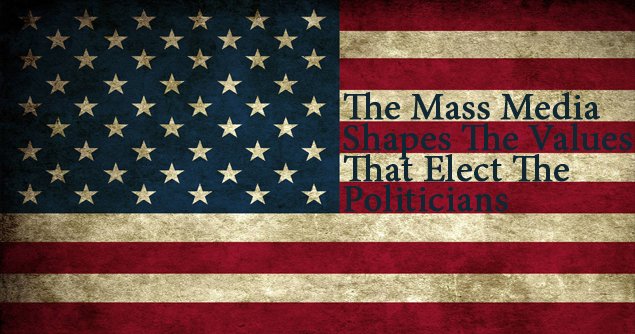 The Mass Media Shapes the Values That Elect the Politicians

People on either side of the political divide – liberal versus conservative – often complain about the values their political opponents advocate.

Thus, for example, Donald Trump supporters, including the NRA, might complain that Hillary Clinton supporters are more concerned about restricting the Second Amendment rights of “average” American citizens than they are about stopping would-be Muslim terrorists from shooting up a nightclub full of people on a Friday night.

Conversely, Hillary Clinton supporters might complain that Donald Trump supporters, including the NRA, are more concerned with demonizing foreigners and gun sales profits than they are with protecting innocent civilians from gun-toting madmen.

What everyone should understand, however, is that the mass media of entertainment shapes the values that elect the politicians.

For instance, a November 2013 survey by Harris Interactive (http://www.marketingcharts.com/television/are-celebrities-that-influential-38018/) showed that 27 percent of younger people age 18-36 may be swayed by what today’s top celebrities, including pop singers and actors, say about issues like gun control, terrorism, immigration, and same-sex marriage, compared to only 10 percent of older people age 68+.

According to Politico, the youth vote in presidential elections has increased from 17 percent of the electorate in 2004 to 19 percent in 2012.

In addition to the influence of celebrities like Beyoncé, the mass media can also impact voters’ values, especially the values of younger voters, through the national news media, movies and television programs.

Also, the news media can shape opinions by deciding what angle a particular news story will have.

According to the Media research Center on June 22, the time spent arguing in favor of more gun control on ABC, CBS and NBC in the wake of the Muslim terrorist incident in Orlando, Fla. “overwhelmed time devoted to opposing gun rights by 65 minutes and 12 seconds, to just eight minutes and 12 seconds.”

Finally, look at the posters for some of the movies being released by Hollywood in 2016, including THE PURGE:  ELECTION DAY, JASON BOURNE, KEANU, CENTRAL INTELLIGENCE, MONEY MONSTER, HARDCORE HENRY, and DEADPOOL. All of them prominently feature guns!

For 31 years, MOVIEGUIDE® has been working publicly and behind the scenes in Hollywood to encourage decision makers and artists in Hollywood to make more movies and television programs with Christian, biblical faith and values.

We have had great success doing this, but we still face a tidal wave of opposition with only a modicum of support, especially if you consider that Hollywood spends millions of dollars making, distributing and marketing a single movie.

Rather than curse the darkness, those who are concerned about the moral, cultural and political direction of America in 2016 can light a million candles by joining with MOVIEGUIDE®. We can’t make a real difference in this fight to spread the Gospel of Jesus Christ through the mass media without YOUR help!

Please make your decision today, because tomorrow may be too late.

Every day wasted is a day that lets the Adversary pervert the heart and mind of somebody’s child or grandchild, and bring the United States closer and closer to destruction!