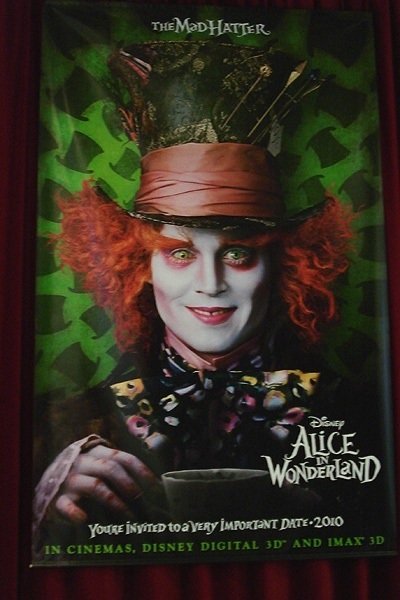 Tim Burton’s ALICE IN WONDERLAND is a re-imagining of Alice as a 19-year-old girl going back to Wonderland to escape an unpleasant suitor. Alice bolts from his proposal to follow the white rabbit once more down the rabbit hole. There, she encounters the characters from her previous adventures. The good guys, including the White Rabbit, the Mad Hatter, the March Hair, and the Caterpillar, try to find out if she is the real Alice because they need her to slay the Jabberwocky with the vorpal sword. The Red Queen hears that Alice is back. She sends her henchman, Stayne, to capture Alice. Stayne captures the Mad Hatter, the White Rabbit, and the others. Alice goes to rescue her friends.

It becomes clear at the end of this story that ALICE IN WONDERLAND is a feminist fable. Along the way, however, there are many strong Christian references, but there is a hint of paganism at one point and scenes of strong violence. ALICE IN WONDERLAND captures your attention until the very end, which is anticlimactic. Tim Burton is a master of imagery and direction. Caution is warranted for children because of the violence.

(Ro, FeFe, CCC, BB, CapCap, L, VV, A, DD, M) Light Romantic worldview with strong feminist elements and some false religious references and many strong Christian references, including the Holy Fool, the Shield of Faith, the Sword of the Spirit, and the born-again butterfly, plus strong moral and pro-capitalist content; one exclamatory “Oh God”; some intense strong violence including gigantic, cat-like creature gets its eye gouged out, girl falls down rabbit hole and hits many objects, hedgehog gets hit by flamingo mallet, Jabberwocky gets head cut off, it seems as if Mad Hatter gets his head cut off, girl gets scratched by monster and it festers as a bleeding wound, creatures fight, creatures die; no sex but there seems to be a latent relationship between the older Mad Hatter and a young woman and kissing; no nudity; some alcohol use; caterpillar smokes a hooka and blows smoke in other characters’ faces and girl drinks potion to increase her size and eats cake to reduce her size; and, white queen makes witches potion using fingers and other disgusting items.

Tim Burton’s ALICE IN WONDERLAND is not the classic Walt Disney fantasy, nor the Lewis Carroll story. Rather, it is a re-imagining of Alice as a 19-year-old girl going back to Wonderland to escape an unpleasant suitor and ending up finding that it was not the colorful place of her youth but a darker, more decayed, more edgy kingdom under the rule of the evil Red Queen.

Burton’s re-imagining is fascinating and will evoke a lot of philosophical and theological discussions, but it is no longer Lewis Carroll’s children story to help a young girl deal with her fears. The movie opens with young Alice in bed telling her father the fantastic tale and asking him if she’s mad. Her father says all the best people are a little bit mad.

Cut to a 19-year-old Alice being rushed in a carriage by her widowed mother to her engagement party at a grand estate. All of the lords and ladies stand around watching her as her unpleasant and unattractive suitor proposes. Alice knows what she has been told that this is her one chance to be a lady, and that she’s not getting any younger and that someday she’ll lose her looks, but she bolts from his proposal anyway to follow the white rabbit once more down the rabbit hole. There, she encounters and slowly remembers all of the characters from her previous adventure. The good guys, including the White Rabbit, the Mad Hatter, the March Hair, and Absolem the Caterpillar, are trying to find out if she is the real Alice, because it is written in the Sacred Scroll, the Oraculum, that the real Alice will slay the Jabberwocky with the vorpal sword. The Scroll is like an animated parchment that has biblical connotations and a clear message of predestination.

The Red Queen hears that Alice is back. She sends her henchman, Stayne, the Knave of Hearts, to capture her with the ugly feline looking Bandersnatch. In the first encounter, Dormouse rescues Alice by plucking out Bandersnatch’s eye with his sword, but Stayne captures the Mad Hatter, the White Rabbit, and the others.

Meanwhile, Alice is told she must kill the Jabberwocky. Instead, she goes to rescue her friends from the Red Queen, who keeps throwing temper tantrums and yelling, “Off with their heads.” The question is, what will happen to the Mad Hatter sentenced to death? Will the White Queen regain her kingdom? Will Alice slay the Jabberwocky?

By the end of the movie, if there were any doubts, it becomes clear that this is a feminist story. In fact, the resolution after the climax is a letdown and inconceivable in terms of the actual history of the Victorian Age. There is also the stated mission of Tim Burton and the screenwriter in the production notes to see the Mad Hatter and his friends as revolutionaries. Even so, the political implications of this are not necessarily communist or Romantic, because the Red Queen is a tyrant, and these revolutionaries don’t want another tyrant. They want liberty.

In another way, however, the Mad Hatter is a Holy Fool who is willing to sacrifice his life to save his friends and his enemies. The Holy Fool is a Christ figure in many tales.

Although the movie makes much ado about choice, the Oraculum Scroll seems to suggest that everything Alice does was predestined. Right in the beginning, the audience sees that Alice slays the Jabberwocky when she reads the Oraculum Scroll. This presentation of Free Will and Predestination is close to the biblical definition, which does not imply the fatalism of Islam or the solipsism of Hinduism.

Most people know that Lewis Carroll was actually an Anglican minister named Charles Dobson. With this in mind, many other Christian allusions may be implicit in ALICE IN WONDERLAND.

Thus, in the book, the caterpillar shows the mistake of pursuing knowledge for knowledge’s sake. His flaw and the flaws of other Wonderland characters suggest the sin of excess. Thus, eating is good, while the excess of gluttony is sinful. Politics is not bad, but tyranny is bad.

Alice’s shield is may be seen as the Shield of Faith. This is made explicit at one point when Alice has to recall her belief in “impossible things.”

Alice also has been told she will not be the one who slays the Jabberwocky, but the vorpal sword actually will do it. All Alice is supposed to do is hold the sword properly. The vorpal sword thus can be seen as the Sword of the Spirit, the Word of God, and has been seen as such by literary critics and historians.

Like the Messiah, the “seed of the woman,” prophesied in Genesis 3:15, the sword must cut off the head of the serpent, the Jabberwocky. Thus, the Word of God (not only the Bible but the Word Made Flesh in John 1) symbolically crushes the head of Satan, the evil serpent representing mankind’s sinful nature. And, it is the Word who really slays the dragon.

In other words, the possible Christian symbolism in this re-imagining of ALICE IN WONDERLAND sometimes morphs into pagan elements that hint at false religious, political, and ideological views.

When he wrote the original ALICE IN WONDERLAND, Lewis Carroll seems to be trying to empower young Alice to love her parents and to be the Alice she should be. In this movie, Alice is empowered to rebel against her mother, reject her suitor, go against tradition, and become a merchant in China. This is a 21st Century Alice in a 19th Century world, but it is still an entertaining re-imagining with moral and spiritually uplifting aspects.

ALICE IN WONDERLAND captures your attention until the very end, which is anticlimactic. The special effects, acting, and production quality are very good. Tim Burton is clearly a master of imagery and direction. Johnny Depp is terrific as the Mad Hatter. In fact, he is so good that he overshadows Alice, played by Mia Wasikowska. Alice herself is slightly unapproachable and less winsome when compared to the fascinating character of the Mad Hatter.

Because of some violent scenes, parents should be cautious for their children. Having eyes plucked out and heads cut off can be very scary. And, some of the movie’s references will be confusing. For older audiences, ALICE IN WONDERLAND is one of those movies you can talk about forever, as long as you don’t get caught up in its 21st Century politics.

Rent or Buy ALICE IN WONDERLAND: