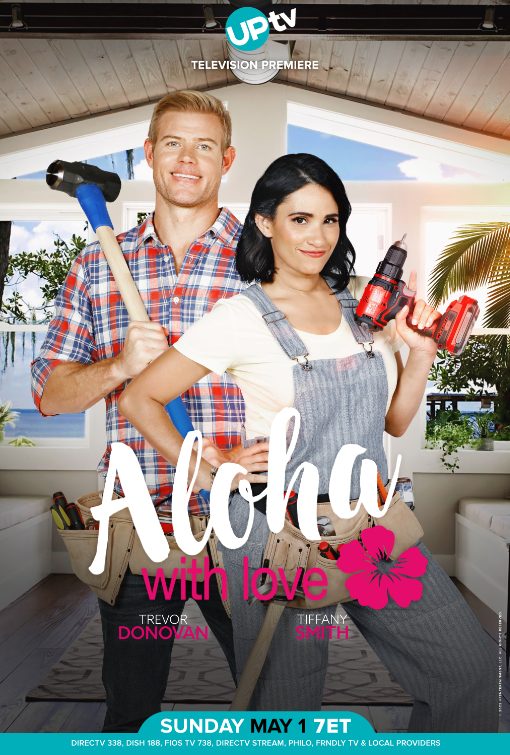 ALOHA WITH LOVE is a romantic drama on UPtv. Gemma is a big city architect who flies to Hawaii after her Aunt Lani’s death. Gemma learns that Aunt Lani left her family home to Gemma and her sister, Sarah. Gemma reluctantly works with a handsome contractor named Ben, who wants Lani’s legacy to survive. He and Gemma become a strong team and fall in love. However, a persistent ex-boyfriend makes Gemma’s decision about the house and what she truly loves a lot more complicated. Gemma must choose between the legacy and love for her family and financial stability for the future.

ALOHA WITH LOVE has a strong pro-family, redemptive worldview that stresses the importance of love, legacy and even prayer. Despite her predicament, Gemma and her family support one another and sacrifice their needs for one another. In the end, Gemma learns that loving her family is more important than almost anything else. Refreshingly, the family discusses the big decision together and thereby avoids needless miscommunication. The performances in ALOHA WITH LOVE are good all around and help draw in the viewer.

(BB, CC, V, N, A, M):
Dominant Worldview and Other Worldview Content/Elements:
Strong moral worldview with strong redemptive content where people put family first, characters apologize for past mistakes and others are quick to show forgiveness, Gemma learns that love and family legacy is more important than financial gain, and, in a video recorded before her death, an aunt says she prays to God for one of her nieces, the lead female character in the movie
Foul Language:
No foul language
Violence:
An aunt dies early in the movie from heart complications which forces lead female character to travel to Hawaii, her death is talked about throughout the movie, but nothing is ever shown
Sex:
No sex, but an unmarried couple kiss, and a man calls a women hot, but another man reprimands him
Nudity:
Brief upper male nudity
Alcohol Use:
A few scenes that include wine or other drinks
Smoking and/or Drug Use and Abuse:
No smoking or drugs; and,
Miscellaneous Immorality:
While the death of the aunt could affect some viewers, her death is handled with care and honor that shows up in the movie’s main themes like love, legacy and family.

ALOHA WITH LOVE is a romantic drama on UPtv about a big city architect who flies to Hawaii after her aunt’s sudden death, but encounters romantic and family problems when her ex-boyfriend causes problems with the renovation of her aunt’s house and her blossoming relationship with the male contractor she hired to help her. ALOHA WITH LOVE has excellent performances throughout and a strong pro-family, redemptive worldview that stresses the importance of love, family legacy, forgiveness, caring for one another, and praying to God.

Gemma is a skilled architect who works with her boyfriend. Her boyfriend is ambitious but often treats their relationship more like a business. At the pitch of a lifetime, Gemma shares her opinion that is different from what the company wants. Instead of supporting her artistic expertise, Gemma’s boyfriend dismisses her opinion.

Gemma decides to break things off with her boyfriend. However, matters are made even worse when Gemma learns that her Auntie Lani passed away just hours after they had talked on the phone. Gemma decides to fly back to Hawaii and spend time with her father and sister.

When she arrives in Hawaii, Gemma learns that Aunt Lani gave both the family house and the surrounding land to Gemma and her sister, Sarah. Lani says specifically that, if the two sisters want to sell the house, Gemma must oversee the renovations herself. Gemma agrees to renovate the house, with the help of a contractor named Ben.

As it turns out, Ben and Gemma went to the same high school. However, their old acquaintance doesn’t save them from their disagreements over what should be done with the house. When Ben suggests they preserve Lani’s legacy, Gemma fires him.

At Lani’s memorial service, Gemma’s father encourages her to rehire Ben and bring the house back to life. Gemma still believes she wants to sell the house but agrees to work with Ben throughout the renovation process. The two become a strong team and begin to fall in love with one another. The house is almost complete when Sarah tells Gemma shocking news.

Gemma wants to keep her family’s wishes a priority. However, when her old boyfriend gets involved with her aunt’s property, she’s faced with a difficult decision. Gemma must decide what is most important, embracing the legacy of her loving family or financial stability for the future.

ALOHA WITH LOVE has a strong pro-family, redemptive worldview. It stresses the importance of love and legacy. Despite her predicament, Gemma and her family support one another and sacrifice their needs for the needs of their loved ones. In the end, Gemma learns that loving her family is more important than almost anything else. Refreshingly, the family discusses the big decision together and thereby avoids needless miscommunication. Also, characters apologize for their past mistakes, and others are quick to show forgiveness. Finally, in a video she recorded before her untimely death, Aunt Lani says she prays to God for Gemma. The performances in ALOHA WITH LOVE are good all around and help draw in the viewer. Though the story is geared toward children older than 10 or 11, it has no objectionable content that would be a problem for younger children.