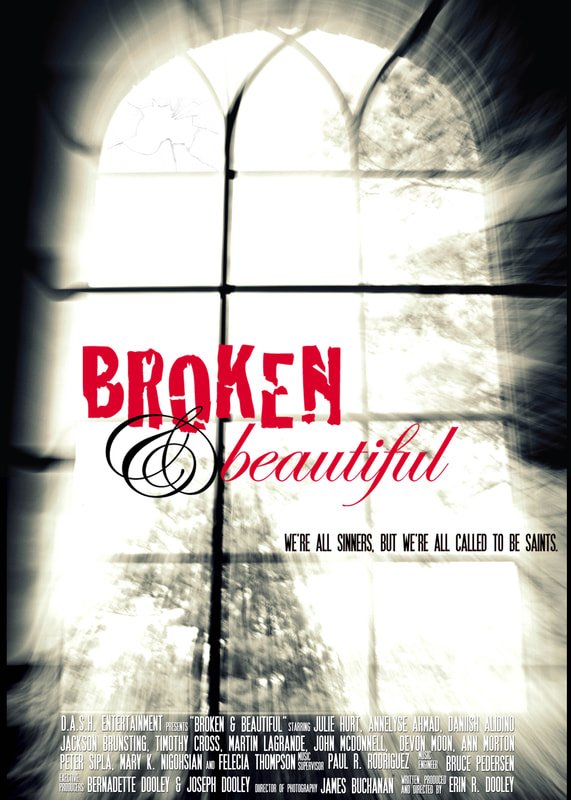 BROKEN & BEAUTIFUL looks at the real, messy struggles that contemporary Christians face. Members of the All Saints Church each face their own battles and live them out on-screen in a Christian musical told with contemporary Christian music. Each story is unique and often surprising and interesting. For example, one young marriage is being torn up by impoverishment, a married man struggles with addition to pornography, a young pastor feels inadequate, and the stories continue.

BROKEN & BEAUTIFUL does a compelling job balancing the screen time so that each story gets adequately told. No one story feels too dominant, and no story feels too shallow. Solid performances by several actors balance out some of the weaker performances in the movie. Occasionally the worship music does not quite feel narrative enough to advance the story, but interesting juxtaposition of lyrics helps to even out the inconsistency. Because of how honestly the movie looks at real struggle, some content may not be appropriate for young viewers. However, the message in BROKEN & BEAUTIFUL is ultimately one of healing and deep hope in Christ.

(CCC, BB, Ho, S, DD, M):
Dominant Worldview and Other Worldview Content/Elements:
Very strong Christian worldview as the movie uses contemporary Christian music as a core storytelling device, so references to God, Jesus, the Spirit, prayer, missions, and a host of other Christ-honoring subjects are abundant, and each character is a conflicted and sinful Christian who is ultimately brought to confess their sin and renew their faith, plus some references to one character’s struggles with homosexual behavior;
Foul Language:
No foul language;
Violence:
No violence;
Sex:
Several instances of implied martial sex, several instances of implied pornography, one of the main characters is a former actress in pornography who has come to faith, a married woman kisses an unmarried pastor, one character is convicted to overcome his homosexual desires, and a married couple discusses being careful about when they are intimate so that they don’t get pregnant;
Nudity:
No nudity;
Alcohol Use:
A man asks his wife to go to a local bar and grab a beer, later he goes to the bar and is seen drinking a glass of beer, a man is seen holding a bottle of wine, and a woman is seen drinking a glass of wine;
Smoking and/or Drug Use and Abuse:
No smoking but one mention of drugs being forced upon an abused woman; and,
Miscellaneous Immorality:
Women in a church are seen gossiping about a member of their women’s group and a woman mentions she’s previously had an abortion.

Contemporary Christians face a host of complicated, messy challenges and struggles. Life is not always as easy as it appears in Sunday School.

In BROKEN & BEAUTIFUL, a unique and refreshing Christian musical, Writer and Director Erin Dooley takes an honest look at some of these struggles.

The members of All Saints Church, a sort of fictional “everyman” church, each face deep personal and familial conflicts. Addiction, infidelity, loss… the kinds of struggles people tend to avoid in church. Dooley really digs into the mess, showing audiences what Christians can face in this world.

For example, a husband faces an addiction to pornography. A widower struggles with homosexuality. A wealthy couple find themselves convicted about their lavish lifestyle. A converted pornography actress fights to feel forgiven.

These are complicated stories, with no easy answers. Dooley’s writing points each character back to Jesus Christ, who is the only real answer to deep, heart struggles like these.

BROKEN & BEAUTIFUL uses contemporary Christian music as a vehicle for touching some of the more ethereal parts of faith life. Viewers who spend time listening to Christian radio will recognize some of their favorite worship songs and will find them enriched by a new narrative context. However, viewers will also find that the vocal performances in the movie are not the same caliber as the Christian music artists they hear on the radio.

The movie’s music is heavily weighted toward the end. The movie’s first half is mostly scenes, with a few songs; the second half is almost entirely performances of modern Christian worship songs. This can make Dooley’s movie feel more like a set up to provide interesting context to a Christian music concert than a fully flushed out film. This is the case, for instance, late in the story, when the song “Come As You Are” by Pocket Full of Rocks is performed as a sermon that the congregation desperately needs to hear. Occasionally, therefore, the use of contemporary Christian music feels awkward and forced, but this is balanced by numerous occasions where the juxtaposition of song and story is effective and impactful.

Strong performances by actors like Felicia Thompson (Desiree) and Annelyse Ahmad (Urmilla) help to really bring the individual stories to life. Ahmad, especially, is able to capture the complex feelings of brokenness and, yet, a deep and hopeful faith that often accompanies the Christian journey. The cast as a whole works well together, although there are a number of choppy performances that take away from the storytelling.

Because Dooley doesn’t shy away from displaying real struggles as they really are, BROKEN & BEAUTIFUL does contain some content that is not appropriate for young viewers. The writing and performances are earnest about things like pornography addiction, homosexuality and infidelity. One of the main characters is a former actress in pornography who has come to faith. A young pastor kisses a married woman. This content might distress parents, if the message of hope was not so clear. Christ’s power to change lives is the movie’s ultimate theme. As each character is brought before God, the audience is challenged to bring themselves to God as well.