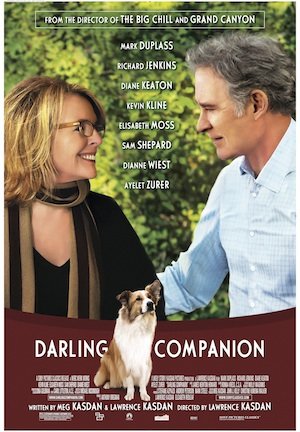 DARLING COMPANION stars Diane Keaton as Beth, a middle-aged woman who finds a stray dog near the freeway that changes her and her family’s life. One day, however, the dog, who’s named Freeway, goes missing. This dismays the whole family and leads to a great search for Freeway. Though the search becomes more like an adventure, it brings everyone together. Hearts are mended, forgiveness occurs, and relationships are healed.

DARLING COMPANION is a character study. It mostly consists of conversations between the characters. The only sense of action is the search for the missing dog. This gets a little repetitious and tiring. It’s really the wonderful acting, led by veterans like Diane Keaton and Kevin Kline, that makes DARLING COMPANION entertaining. Otherwise, the story is a bit weak. DARLING COMPANION stresses the importance of marriage as well as forgiveness and working things out with the ones you love. However, there’s a lot of foul language. Also, one character claims to be a gypsy who uses New Age visions and voodoo to locate the dog. However, none of these things succeed. Overall, therefore, MOVIEGUIDE® advises extreme caution for DARLING COMPANION.

(PaPa, OO, BB, C, LLL, V, S, A, M) Mixed pagan worldview with New Age visions, voodoo, and commentary about people being connected to the animal world, but none of the visions or voodoo practices work, and there’s some moral, redemptive elements where marriage, working things out with the ones you love, and forgiveness are extolled; 35 obscenities and 29 profanities, including two strong profanities, and some crude commentary, plus implied urinating; some pushing but no other violence; implied fornication out of wedlock and some sexual comments; no nudity; drinking; no smoking or drug use; and, implied dysfunctional family portrayal as father left family, moral relativism, married couples work to mend their troubled relationships with each other.

DARLING COMPANION stars Diane Keaton as Beth, a middle-aged woman who finds a stray dog on the side of the freeway that changes her and her family’s life. DARLING COMPANION stresses uniting and mending marriages and families but has some New Age, occult content and a fair amount of foul language.

Beth and her husband, Joseph (played by Kevin Kline), have been married for quite some time. They are at a midlife stage, with both feeling a little frustrated by the other. When Beth and her daughter, Grace, come across a stray dog on the side of the road, Beth immediately takes the dog in without Joseph’s consent. She names the dog Freeway.

Grace and Beth take Freeway to the veterinarian, Sam, to make sure he’s healthy. Instantly, there’s a connection between Grace and Sam. Not too long after that, they get engaged. Meanwhile, Freeway starts to be a part of the family, bringing love and companionship to everyone he encounters.

Up in the mountains of Utah, Grace and Sam get married. They even include Freeway into the wedding. They depart for their honeymoon.

While Joseph is walking Freeway, Freeway sees a deer, runs for it, and gets lost. Once hearing this news, the whole family is in dismay, especially Beth who blames the whole account on Joseph. Everyone decides to stay the extra days in the mountain searching for Freeway. Along with Beth and Joseph is Joseph’s sister, Penny, who’s dating Russell. Penny’s son, Bryan, is also on the search for Freeway along with the cabin caretaker, Carmen.

These events lead to a serious of conversations where the characters really get to know each other. Carmen revels she’s actually a gypsy and can see visions. She also does some voodoo and thinks she knows where Freeway might be. Time after time, Carmen leads the whole group to different locations, thinking she has seen a vision of where Freeway might be, but her visions are never correct. Despite this, a bond between Bryan and Carmen starts to occur, while Beth and Joseph work out their marital issues. The big questions still arises, will the group find their beloved dog Freeway?

DARLING COMPANION is a character-based film that’s mostly made up of conversations between the characters. The only sense of action is the characters searching for hours for their dog. This naturally gets a little repetitious and tiring. Thus, it’s really the wonderful actors in the movie, especially Diane Keaton, Kevin Kline, Dianne Wiest, and Richard Jenkins, who make the film entertaining. Otherwise, the plotline is a bit weak. Also, the camera is sometimes shaky, but overall the setting is beautiful.

With many references to voodoo and New Age visions, DARLING COMPANION leads more toward a New Age worldview. However, it does stress the importance of marriage. It also advocates forgiveness and working things out with the ones you love. Finally, despite Carmen’s New Age visions and voodoo practices, they never seem to amount to any truth. Even so, extreme caution is advised regarding DARLING COMPANION due to this content, plus its frequent foul language.