"Giving Proper Respect to the Dead" 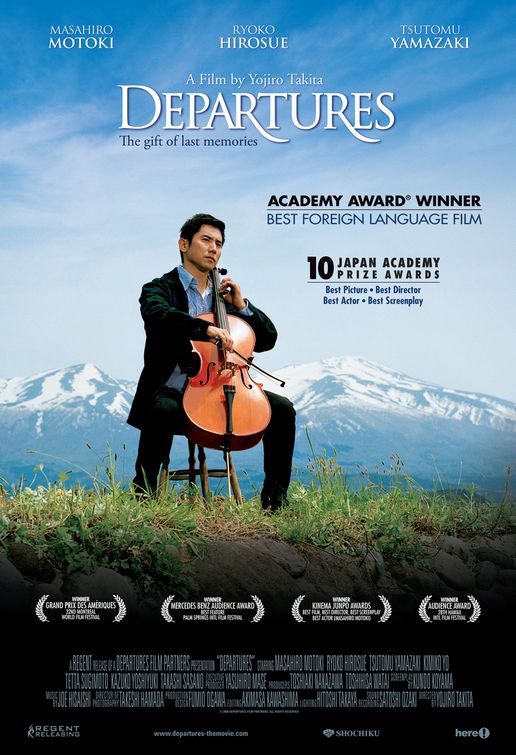 DEPARTURES is this year’s foreign language Oscar-winner from Japan. The story focuses on Daigo, a young married cellist who loses his job when a struggling philharmonic orchestra folds. Daigo decides to get a regular job in his hometown. He and his wife, Mika, are pleased when he seems to have found a travel agency job. When he shows up, however, he learns that the job is for a Japanese funeral home that involves the ceremonial preparation and washing of dead bodies at funerals. At first, the job repulses Daigo, but he slowly finds great meaning and purpose in it, especially the way in which it ministers to the grief of all kinds of mourners. The problem is, he is too ashamed to tell his wife what he does.

DEPARTURES is an exquisite, extraordinary, redemptive masterpiece of powerful emotions. It takes a morbid subject and turns it into an inspiring cinematic triumph of sublime, profound beauty. The movie contains a mixture of religious references, including overt Christian ones, but its main message is that there is an essential human dignity, a transcendent spark from the Divine, that deserves our respect and love.

(BBB, CC, Pa, FR, Ho, N, A, M) Very strong moral worldview focusing on a life of service to others with strong redemptive content and some overt positive references to Christianity, especially in one funeral and during reverential playing of the song “Ave, Maria,” plus some references to Buddhism and other false pagan superstitions and a homosexual element in one scene where embarrassed protagonist discovers a female corpse is really a cross-dressing young man; no foul language, but man gets sick and throws up; no violence; no sex scenes; brief upper and rear male nudity in Japanese bathhouse scenes; alcohol use; no smoking; and, man slips on rotten food, implied ancestor reverence, scene of gluttony, a couple morbid jokes, funeral director says his people serve people of all faiths, wife becomes ashamed of husband because of his job but they eventually reconcile with a stronger marriage, mention of a dead body smelling, and protagonist is estranged from his father, who deserted the family.

DEPARTURES, the Oscar-winning movie from Japan, is an exquisite, extraordinary, ultimately redemptive masterpiece of powerful emotions. It takes a morbid, dark subject and turns it into an inspiring cinematic triumph of sublime, profound beauty.

The story involves a young married Japanese cellist, Daigo Kobayashi, who loses his job at a philharmonic orchestra when it folds. Daigo decides to quit music and get a regular job back in his hometown. He and his pretty wife, Mika, are pleased when he seems to have found a job at a travel agency. When he shows up, however, he learns that the job is for a Japanese funeral home that involves the ceremonial preparation and washing of dead people at funerals. The ad said Departures, but it really meant The Departed.

At first, Daigo is repulsed by this job, but then he sees how lovingly, gracefully and tastefully the funeral director prepares the bodies at the funerals for burial. And, he sees the overwhelming gratitude that the mourners feel for how respectfully their loved ones are handled.

Despite this, Daigo knows that his wife, Mika, will be ashamed of the kind of work he is doing. When Mika finds out, she angrily returns to her family in Tokyo, but curiosity gets the better of her. She attends one of his funeral services, and is incredibly moved by the beautiful way in which her husband does his job, especially how deeply it ministers to the grief of the thankful mourners. Later, she helps him face a personal dilemma when he learns of a family tragedy. The entire experience brings Daigo and Mika closer together at a crucial moment in their lives, the coming arrival of their first child.

Words cannot express how moving and ultimately inspiring this sublime little movie from Japan is. Scene after scene offers something profound, provocative, joyful, or heart-wrenching, sometimes all together. The movie also contains some overtly positive Christian content, especially in a brief scene that takes place at a Christian funeral and during the playing of “Ave Maria.”

There are some references to Buddhism, however, and some references to death that require caution. There is also one scene where the protagonist finds out a dead body was a cross-dressing young man. The movie’s main message, however, is that, whether the loved one is Christian, Buddhist, Jewish, atheist, or whatever, whether they treated you kindly or unkindly, and whatever their ultimate destination in the afterlife, whether Heaven or Hell, there is an essential human dignity, a transcendent spark from the Divine, that deserves our full respect and love.

“Love your enemies, do good to those who hate you, bless those who curse you, pray for those who mistreat you. . . . If you love those who love you, what credit is that to you? Even ‘sinners’ love those who love them. . . . But love your enemies, do good to them, and lend to them without expecting to get anything back. Then your reward will be great, and you will be sons of the Most High, because he is kind to the ungrateful and wicked.” – Jesus Christ, Luke 6:27-35.