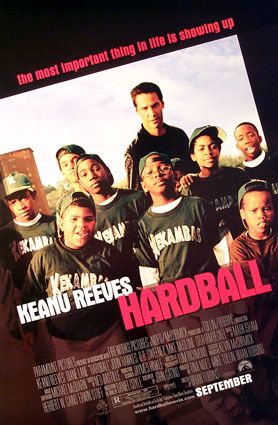 Keanu Reeves stars in HARDBALL as Conor O’Neill, a lost young man in Chicago who fritters his nights away drinking and gambling. When his gambling debts pile up to $11,000, a rich friend gets him a job coaching a Little League baseball team of inner city black youths living in the government housing projects. The team turns out to be a group of tough-talking, needy children looking for a father figure. Conor starts to feel sympathy for them when he sees the dangerous circumstances around them in the government housing projects where they live. The joy of helping others transforms his life.

Despite a powerfully redemptive, even Christian, theme running through it, HARDBALL contains plenty of foul language, including a few crude sexual references in the movie’s dialogue and music. A good portion of that filthy language comes from the children. This is really a form of mental, emotional, even sexual, abuse that should be against the law. Regrettably, however, we now live in an MTV culture filled with crude, degrading humor, cowardly politicians and a corrupt, anti-Christian legal system. Because of this, and a badly mixed message about gambling, MOVIEGUIDE® cannot recommend HARDBALL.

HARDBALL could have been a great family movie with strong Christian references like last year’s REMEMBER THE TITANS. Instead, the filmmakers have chosen to degrade the family-friendly, redemptive qualities in their movie with lots of sleazy objectionable content, including a badly mixed message about gambling.

Keanu Reeves plays Conor O’Neill, a lost young man in Chicago who fritters his nights away drinking and gambling. When his gambling debts pile up to $11,000, he goes to a young rich friend at a ritzy financial firm. The friend refuses to give him that kind of money. Instead, he agrees to pay Conor $500 a week if Conor will help him coach a Little League baseball team of inner city black children. The friend’s company is sponsoring the team as a civic gesture. Of course, the rich friend abandons Conor at the field with the kids, telling Conor that he has to go out of town. Conor still needs to pay off his gambling debts, so he agrees to coach until he finds another good bet that will help him pay off his debts.

The team turns out to be a group of tough-talking, needy children looking for a father figure. Conor starts to feel sympathy for them when he sees the dangerous circumstances around them in the government housing projects where they live. For instance, the families in the projects have to sit on the floors of their apartments because gang gunfire enters their windows. Conor also becomes interested in the pretty teacher in the class at the Catholic school that some of the children attend. Eventually, Conor must decide what kind of lifestyle he really wants and what kind of community he wants to build.

There’s a fabulous redemptive, even Christian, theme running through HARDBALL. The joy of helping other people, especially children, does indeed transform Conor’s life. In one crucial scene, he sees how the joy he brings to the children causes them to lift their hands in joy. Then, in a wonderful scene set in a church, he describes how that sight lifted him up as well and made him a better person, if only for that moment. In the background of this scene is a statue of Jesus, which depicts Jesus lifting his arms up to welcome the people to come and worship Him.

Although these Christian references are too subtle and not as strong as they should be, they are definitely there, and HARDBALL is a better movie for including them. However, the rest of the movie is filled with foul language, including a few crude sexual references by the children. One of the sexual references was especially painful to hear, and borders on sexual molestation of a young minor. As the ad to the Negro College Fund says, “The mind is a terrible thing to waste,” and it’s awfully degrading to see filmmakers waste their creative minds by resorting to using children in this degrading way. This is especially true since, according to the people behind the story that inspired this movie, the real-life Little League players were taught to abstain from such filthy talk.

Thus, instead of being true to their source of inspiration, the filmmakers of HARDBALL falsify the record by having the children spout plenty of obscenities themselves. Having child actors spout such filthy language is a form of mental, emotional abuse. Having them make a crude reference to oral sex, as HARDBALL does, is a form of sexual abuse. These things should be against the law. Regrettably, however, we now live in an MTV culture filled with crude humor, cowardly politicians and a corrupt, anti-Christian legal system. It makes one wonder whether the filmmakers of HARDBALL have also decided to downplay the Christian elements in their story as well. It wouldn’t be the first time someone in the entertainment industry was Christophobic.

Whatever the truth to this may be, however, HARDBALL is the kind of movie that seems not to know what it wants to be. Just when its positive messages start to redeem the content, the movie seems to be pull back lest it be accused of being too sentimental or even cloying. Of course, not every family movie has to be a repeat of REBECCA OF SUNNYBROOK FARM. HARDBALL could still have presented Conor’s problems in a realistic manner while at the same time cleaning up most if not all of the dialogue in those scenes and in the scenes with the children, but it isn’t until the end of HARDBALL that the filmmakers finally decide it’s better to enlighten and uplift people’s spirits rather than defile and degrade them. Perhaps, a Christian film company can take this story and make it into the kind of movie that God intended.

Another problem with HARDBALL is its depiction of gambling. Although the movie clearly shows that Conor’s gambling habit is destructive and Conor eventually does give up gambling, it also shows him getting rid of his $11,000 gambling debt by placing a successful $12,000 basketball bet. This sends a badly mixed message, especially to the children and teenagers who might attend HARDBALL, which has been rated PG-13 “for thematic elements, language and some violence.”

Because of all of its moral problems, MOVIEGUIDE® cannot recommend HARDBALL, despite its positive moral and spiritual qualities.