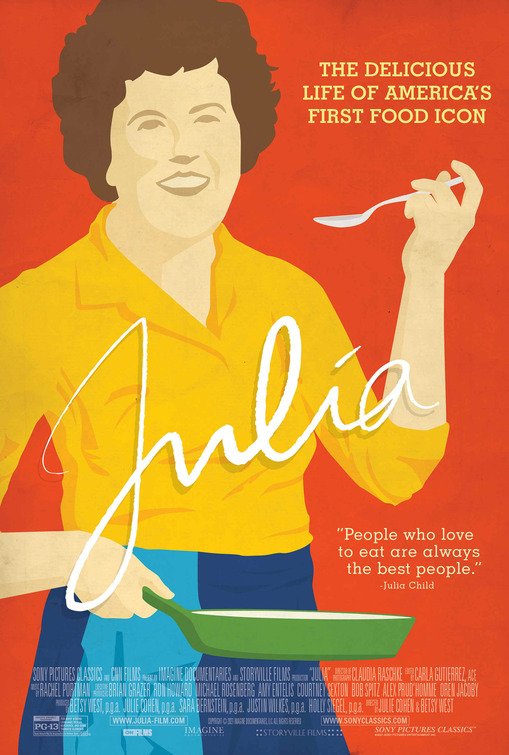 JULIA is a documentary about the life of famed cooking personality Julia Child. After graduating from college, Julia met her husband, Paul Child, while working for America’s spy agency during World War II. When her husband got a State Department job in Paris, they moved to France, where Julia fell in love with French cooking. After graduating from a famous cooking school, she started her own school and eventually published a massive French cookbook for Americans. Julia also gained a huge following in America through her outstanding cooking demonstrations on TV.

JULIA is a well-fashioned documentary. Using a variety of elements, the filmmakers skillfully bring Julia Child’s story to life. However, JULIA has a mixed worldview. The movie romanticizes travel, the process of cooking a meal and Julia’s fascination about food. It also discusses in glowing terms her support for legalized abortion, Planned Parenthood and homosexual causes. This content is mitigated by some strong moral elements supporting marriage and family. MOVIEGUIDE® advises extreme caution for the left-leaning content in JULIA, one “f” word, and a bloody comedy skit about Julia Child cutting her finger.

(PaPa, RoRo, FeFe, BB, P, Cap, Co, HoHo, C, L, VV, S, NN, A, D, M):
Dominant Worldview and Other Worldview Content/Elements:
Somewhat mixed pagan worldview with strong Romantic, feminist elements such as movie romanticizes the process of cooking a meal, travel and wonder about food, and promotes protagonist, Julia Child, as a proto-feminist career woman who supports abortion through Planned Parenthood, mixed with many positive pro-marriage, pro-family sentiments from the protagonist and the restoration of a friendship is mentioned, plus some patriotic elements when characters serve in World War II and work in the American government overseas, protagonist’s husband is accused of being a communist and a homosexual during the Cold War, and there’s a sequence about the protagonist’s support of the homosexual community and helping the fight against AIDS, and a church is depicted in the French countryside
Foul Language:
One light “God knows” profanity and one “f” word
Violence:
Sime light and strong violence includes mentions of war, some cooking violence, Julia waves knives for dramatic effect on camera and accidentally cuts her finger in another instance, to which a comedian later mimics and blood is shown, and protestor shows a bloody aborted baby on a sign
Sex:
Mention of being turned on by food and the sexual nature of the pleasure of cooking and eating, and woman discusses the value of her sex life
Nudity:
Nude female depicted, upper male nudity and married couple appears in a bathtub
Alcohol Use:
Social drinking, alcohol used for cooking
Smoking and/or Drug Use and Abuse:
Some smoking, but no drugs; and,
Miscellaneous Immorality:
Comedian dresses up as a woman for a comedy sketch, and woman recounts that a husband looked at his wife as if she were God.

JULIA is a cinematic stew celebrating food, travel, family, and liberal causes. It’s a documentary about famed cooking personality Julia Child and her life as a chef, career woman, wife, beloved aunt, liberal activist, and personality. JULIA is a well-fashioned movie that skillfully brings Julia Child’s story to life, but the movie’s positive pro-family, patriotic and capitalist content are marred by some Romantic, feminist content, one “f” word, brief nudity, and references to Julia’s support for Planned Parenthood and homosexual causes.

The movie begins with an opening montage of the famed chef, Julia Child, as she prepares a chicken. After the opening credits, JULIA cuts to Boston Massachusetts in 1962. Julia asks for a hot plate to make an omelet, an oddity for someone promoting a book, but then again, it is a cookbook after all. Interviewees explain that food in this time wasn’t very creative, in fact, most of it was pre-packaged and prepped for convenience.

Cut to Pasadena, Calif. in 1912 when Julia was born. Julia was the first of three children to her conservative parents. Julia graduated from college in 1943 in Massachusetts and moved home to Pasadena to take care of her father after her mother died at the age of 60. Soon after, Julia joined the wartime effort during World War II as a typist for the OSS, America’s wartime spy agency and forerunner to the CIA, and does work overseas. She also meets her husband, Paul Child.

Paul gets reassigned to France for work, and the pair make the move to accommodate. In France, Julia falls in love with French cuisine and enrolls in a famous French cooking school. Throughout the years, Julia compiled her namesake cookbook, Mastering the Art of French Cooking and starts her own cooking school. Julia’s husband, Paul, though, endures some questions of his loyalty to the United States during the Cold War with the Soviet Union and its leaders, Joseph Stalin and Nikita Kruschev. So, Paul takes an early retirement back to the States, which takes Julia and him to Massachusetts again.

Back in the States, Julia’s career becomes more public. She starts her own cooking television program on public television, becomes famous and does countless press interviews. Despite a battle with breast cancer and the loss of Paul some years later, Julia continues to work hard and support upcoming chefs while lending her voice to social causes.

Julia Child died in 2004. However, as the documentary shows, chefs, celebrities, friends, her family, and other people continue to champion her legacy.

JULIA is a very well-fashioned documentary. Using a variety of elements to move the narrative along, the filmmakers skillfully bring Julia Child’s story to life. For example, there are interviews with great guests (many of whom knew Julia well), letters, photos, newsreel footage, and archival footage from Julia’s cooking shows.

However, JULIA has a mixed worldview with some questionable content.

For example, it romanticizes the process of cooking a meal, travel and wonder about food. Positively, there are many pro-marriage and pro-family sentiments from Julia Child and her relatives. For instance, although Julia and her husband didn’t have any children, she treated her nieces and nephews like her children. Her grandnephew co-wrote her autobiography with her. The movie also contains some patriotic elements about Julia’s work for the American government during World War II. The movie’s Romantic elements are also accompanied by strong feminist elements. For example, because of her image as a career woman, the movie depicts Julia Child as an icon of the feminist movement. It also lauds her support of abortion through the biggest abortion provider in America, Planned Parenthood. There’s also a sequence showing Julia’s support for the homosexual community, including helping the fight against AIDS. Ironically, during the Cold War, her husband was not only accused of being a communist, he was also accused of being a homosexual. The movie JULIA also contains one “f” word, brief nudity and a scene where a TV comedian makes fun of Julia by pretending to cut his thumb cutting up a chicken and spraying blood all over the studio. MOVIEGUIDE® urges extreme caution for these things and for the movie’s left-leaning content.