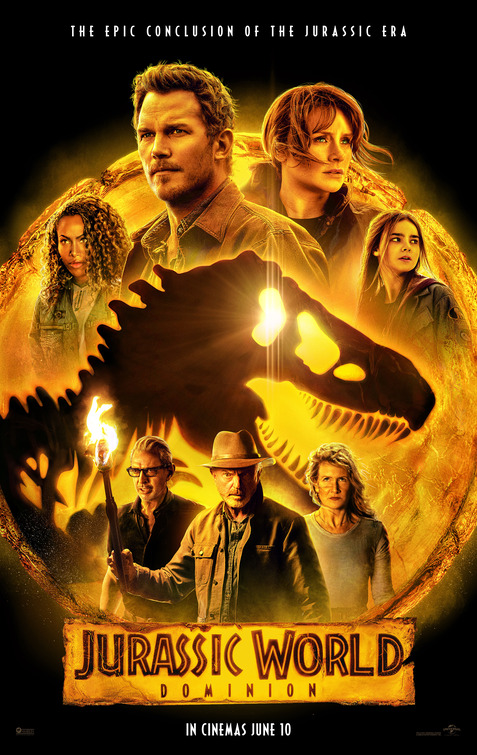 JURASSIC WORLD DOMINION brings back the leading cast members of the first JURASSIC PARK movie. Scientist Ellie Sattler, paleontologist Alan Grant and mathematician Ian Malcolm team up to expose a large, shady biotech firm. The firm has re-created an extinct species of large locusts that’s eating all the world’s crops except for the corporation’s modified ones. Meanwhile, the same firm has sent some thugs to kidnap the baby of Owen Grady’s trained raptor dinosaur. They’ve also kidnapped Owen and his wife, and Claire’s adopted daughter, Maisie. The two situations turn out to be related. So, the five heroes all team up together.

JURASSIC WORLD DOMINION has some terrific action set pieces. The movie also contains many dangerous, thrilling, scary dinosaur encounters. The constant roller coaster ride sometimes does get a little wearying, however. The movie’s main theme seems to be a celebration of motherhood. This strong moral theme is mixed, however, with strong environmentalist elements and implied references to evolution. JURASSIC WORLD DOMINION also contains some foul language and many scary, violent moments featuring lethal dinosaurs. So, MOVIEGUIDE® advises caution for older children.

(BB, EE, Ev, Ho, LL, VV, M):
Dominant Worldview and Other Worldview Content/Elements:
String moral worldview celebrates motherhood (much of the movie concerns to rescue two children of a human mother and a dinosaur mother), mixed with strong environmentalist elements, implied references to evolution, and a woman tells the husband of a red-headed wife that she also likes redheads
Foul Language:
11 obscenities and six light profanities
Violence:
Strong, sometimes scary violence includes dinosaurs chase and stalk humans several times, dinosaurs eat or bite or kill humans, a swarm of giant locusts chase children into barn, woman releases four trained velociraptor dinosaurs and uses a laser to target human victims for the dinosaurs, many near escapes from dinosaurs, lengthy chase scene between a truck and a motorcycle and three raptor dinosaurs, giant locusts get loose, a swarm of giant locusts are deliberately set on fire, but they set a surrounding forest on fire too, dinosaurs fight one another, man falls through ice but is pulled out, plane crashes on frozen lake, a gunfight occurs, etc.
Sex:
No sex
Nudity:
No nudity
Alcohol Use:
No alcohol use
Smoking and/or Drug Use and Abuse:
No smoking or drugs; and,
Miscellaneous Immorality:
Kidnapping, lying, manipulation of human genes, cheating.

JURASSIC WORLD DOMINION brings back the leading cast members of the first JURASSIC PARK movie, in a story about rescuing a 12-year-old girl with genetic enhancements from a large genetic engineering corporation that’s re-created an extinct species of large locusts that’s eating all the world’s crops except for the corporation’s modified ones. JURASSIC WORLD DOMINION is a roller coaster ride with some terrific action set pieces and a story extolling motherhood, but it has some foul language, many scary moments featuring lethal dinosaurs and a few minor plot developments that could be eliminated.

The movie opens four years after the volcano destroyed the Jurassic Park island where the dinosaurs were first cloned. The dinosaurs now live and hunt alongside humans all over the world. However, a large biotech corporation, Biosyn, has established a sanctuary for many dinosaurs in an isolated valley in the Dolomite Mountains in Italy.

One night, some animal rights activists take a small sick dinosaur from an illegal breeding farm. The next day, a swarm of giant locusts menaces two children on a farm. Biosyn is allegedly trying to solve world hunger by creating crops impervious to pests and disease using breakthrough genetic modification. However, Dr. Ellie Sattler visits the farm and tells a colleague that the giant locusts are only eating the modified crops of Biosyn.

Cut to Owen Grady, the dinosaur trainer, and his wife, Claire, the former manager of the old dinosaur park in JURASSIC WORLD living off the grid in an isolated cabin in the Pacific Northwest. They’re trying to protect their adopted 12-year-old daughter, Maisie, the granddaughter of the late Benjamin Lockwood, the silent partner of John Hammond, the man who created the first Jurassic Park. Maisie’s mother was actually a clone created by Maisie’s grandfather, but the mother developed a terminal genetic disease, so she genetically modified her daughter, Maisie, so Maisie wouldn’t come down with the same disease. So, now, Owen and Claire are trying to protect Maisie from nefarious people in the outside world who would like to use Maisie for experiments. However, Maisie is growing tired of Owen and Claire’s restrictions.

The family discovers that the velociraptor Owen trained, nicknamed Blue, has given birth to a baby raptor. Owen had set Blue free in the forest near their cabin. As moviegoers may recall from the first movie, the Jurassic Park dinosaurs were all female, but the scientist who created them, Henry Wu, used amphibian genes to fill in the gaps in the dinosaur genomes, so the dinosaurs can breed all by themselves.

One day, Maisie and Blue’s baby are kidnapped by several thugs sent by Biosyn’s CEO, Lewis Dodgson, the same man in the original JURASSIC PARK movie who bribed Dennis Nedry to steal 15 dinosaur genes from the park’s lab. Owen recognizes the man who led the kidnapping, so he and Claire set off for Malta, the place where they learn he may have taken Maisie. Before they leave, Owen promises Blue to bring her baby back to her.

Meanwhile, Ellie visits Dr. Alan Grant at his latest archeological dig. During their meeting, the movie reveals that Ellie got married to another man and had two children, both of whom are now in college. She tells Alan that she’s divorced. Alan never got married, but it’s clear he regrets not keeping their romantic relationship going before she met her future husband.

Ellie tells Alan that the iconoclastic mathematician, Ian Malcolm, is now working for Biosyn in their facility in the Dolomite Mountains. Ian’s invited her to visit. She adds that she could use Alan’s help to sneak into Biosyn’s labs to steal a sample of the locust blood. She hopes to use the blood as evidence that Biosyn is behind the plague of giant locusts. Alan agrees to go with her.

In Malta, during a lengthy action sequence involving the kidnapper, a mysterious female agent from Biosyn and four raptors, Owen learns that the bad guys are flying Maisie and the baby raptor to Biosyn’s facility in the Dolomite Mountains. They just miss the plane carrying Maisie and the baby dinosaur, but they manage to hitch a ride on an airplane owned by a female mercenary and former American soldier named Kayla.

So, eventually, Owen, Claire and Kayla end up working with Ellie, Alan and Ian to fly the blood specimen out of the facility and rescue Maisie and the baby dinosaur. Those tasks are easier said than done, however.

JURASSIC WORLD DOMINION has some terrific action set pieces. The lengthy action sequence in Malta, which includes an exciting chase scene, is the best one. The movie also contains many dangerous, thrilling, scary dinosaur encounters. That said, the roller coaster ride gets a little wearying several times. A few plot developments could have been eliminated to tighten up the script, such as the beginning scene with the dinosaur rights activists.

The main theme in JURASSIC WORLD DOMINION seems to a celebration of motherhood. Maisie’s biological mother is concerned about her. So is Claire, Maisie’s adopted mother. And, of course, Blue is concerned about her baby dinosaur. As the father, husband and friend, Owen dedicates himself to leading the rescue of both youngsters.