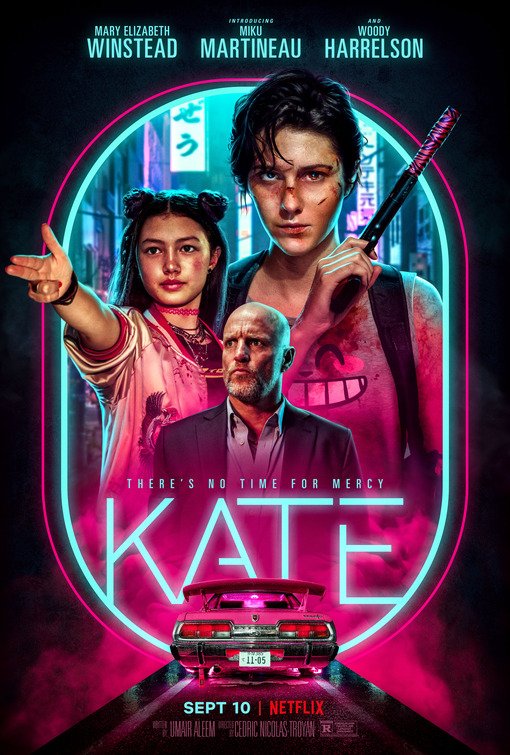 KATE is the umpteenth variation of a story where female assassins are more brutal than men ever would be while exacting revenge for a wrong. Kate is a female assassin who works for a mysterious man named Varrick. Varrick trained her how to fight, shoot and kill after abruptly taking over her care in childhood. After assassinating a Japanese gangster in front of his teenage daughter, Kate learns she’s been double-crossed by Varrick, who gave her a drink poisoned with deadly radiation. She sets out to finish another assignment while also getting deadly revenge against Varrick before she dies.

An original Netflix movie, KATE is a nasty, nihilistic piece of work. It creates an utterly unlikable “heroine” who exists solely to kill others. The movie is almost completely made up of killing people in as bloody a fashion as possible. The title character is poorly underwritten and one-dimensional. This trend toward hyperviolent films starring women goes against God’s natural order, where females are supposed to be a greater nurturing force than men. KATE is a dispiriting mess of a movie that’s completely unsatisfying.

(PaPaPa, LLL, VVV, SS, NN, A, DD, MMM):
Dominant Worldview and Other Worldview Content/Elements:
Very strong, relentlessly brutally violent and nihilistic pagan worldview where female hitman seeks revenge against her boss after he betrays her and tricks her into ingesting a deadly poison for which there’s no cure
Foul Language:
At least 45 obscenities (at least 30 “f” words and many said by teenage girl), no GD profanities, and three Jesus profanities
Violence:
Relentless punching, kicking, stabbings and shootings, female title character stabs and slices countless bad guys and leaving huge sprays of blood all over the place (in one particularly nasty shooting, she shoves a gun under a bad guy’s chin and shoots, with an explosive amount of blood coming out the back of his head), endless mass shootouts in the final stretch of the film (shot in such darkness that viewers can barely tell what’s happening and that makes this an even more nihilistic film where people are basically treated like pieces of meat to be bloodily slaughtered), and a sword fight ends with one man getting his head cut off
Sex:
Briefly depicted fornication scene between man and woman in bra and panties, and prostitutes massage a man while he talks on a phone
Nudity:
Rear female nudity when a woman is shown wearing only a bra and panties, with part of her bottom showing, and middle-aged and older men are seen dressed only in cloths covering their waist and genitals while in a bathhouse
Alcohol Use:
Casual drinking is shown at several points in the film, and the “heroine” is poisoned by radiation she drinks from a bottle of alcohol
Smoking and/or Drug Use and Abuse:
No smoking, but poisoned woman injects herself with a drug every hour in order to stay stimulated and alive;
Miscellaneous Immorality:
Very strong miscellaneous immorality includes lying, betrayal and corruption are shown as the heroine’s “handler” is revealed to be a ruthlessly evil man who’s welcomed into the Japanese mafia, or yakuza, title character takes revenge against her boss who poisoned her, and disturbing scenes of the man teaching the heroine how to fight, kill and shoot while she’s still a young girl.

KATE is the umpteenth variation of some recent movies where female assassins have to be more brutal than men ever would be while exacting revenge for a wrong. KATE is a nasty, nihilistic piece of work with lots of strong foul language, graphic violence, some strong lewd content, and other immoral content. It follows fellow Netflix movies like GUNPOWDER MILKSHAKE and Amazon’s JOLT in creating utterly unlikable “heroines” who exist solely to kill others. In the case of KATE, it results in a dispiriting mess of a movie that’s completely unsatisfying.

Kate (Mary Elizabeth Winstead) is a female assassin who works for a mysterious man named Varrick (Woody Harrelson), who also trained her how to fight, shoot and kill since he abruptly took over her care in childhood. She kicks off things on assignment in Osaka, Japan, where she is to perform a hit on a Yakuza leader that Varrick and his clients have been pursuing for seven months.

She makes the kill but is shaken by the fact that the man’s teenage daughter Ani (Miku Patricia Martineau) is right there next to him, thus breaking her and Varrick’s one rule: to never kill when children are around. Ten months later, she’s assigned to kill the grand leader of the Yakuza, who’s also related to Ani, and finds that she’s suddenly feeling extremely ill after drinking something that Varrick told her to chug.

Kate learns she’s been doublecrossed by her mentor, as she staggers into a hospital only to find out that she has acute radiation poisoning, since her drink was radioactive. She’s given just 24 hours to live, during which time she sets out to finish her assignment but also to get revenge on Varrick by killing him before she dies. Since Ani is also related to the elder Yakuza man, Kate takes her under her wing in what is at first a contentious relationship but becomes a begrudging friendship in Kate’s waning hours.

Will she find Varrick and exact her revenge? And more importantly will Kate ever show enough human emotions for viewers to care?

KATE is almost completely made up of killing people in as bloody a fashion as possible, alternating with verbal sniping between the hitwoman and the foul-mouthed, annoying Ani and downbeat mumbling between Kate and Ani, Kate and Varrick and Kate and the elderly Yakuza. There are several stretches that are Japanese dialogue with subtitles, but they are so mumbled that the scenes prove annoying to follow even with the translation.

Winstead is a rising star who generally does good work in films (particularly 10 CLOVERFIELD LANE and SCOTT PILGRIM VS THE WORLD), but here Kate is so poorly underwritten and one-dimensional that Winstead has nothing to in the script to create the character. Ani is a shrill annoyance from start to finish, and Harrelson can play this kind of role in his sleep by now (and possibly did here).

This trend toward hyperviolent films starring women has a disturbing undertone that goes against God’s natural order, where females are supposed to be a greater nurturing force than men. So, seeing a woman just slice, dice, pummel, and blast people as if they’re chunks of meat is not only unpleasant, but probably damaging to the spirit.