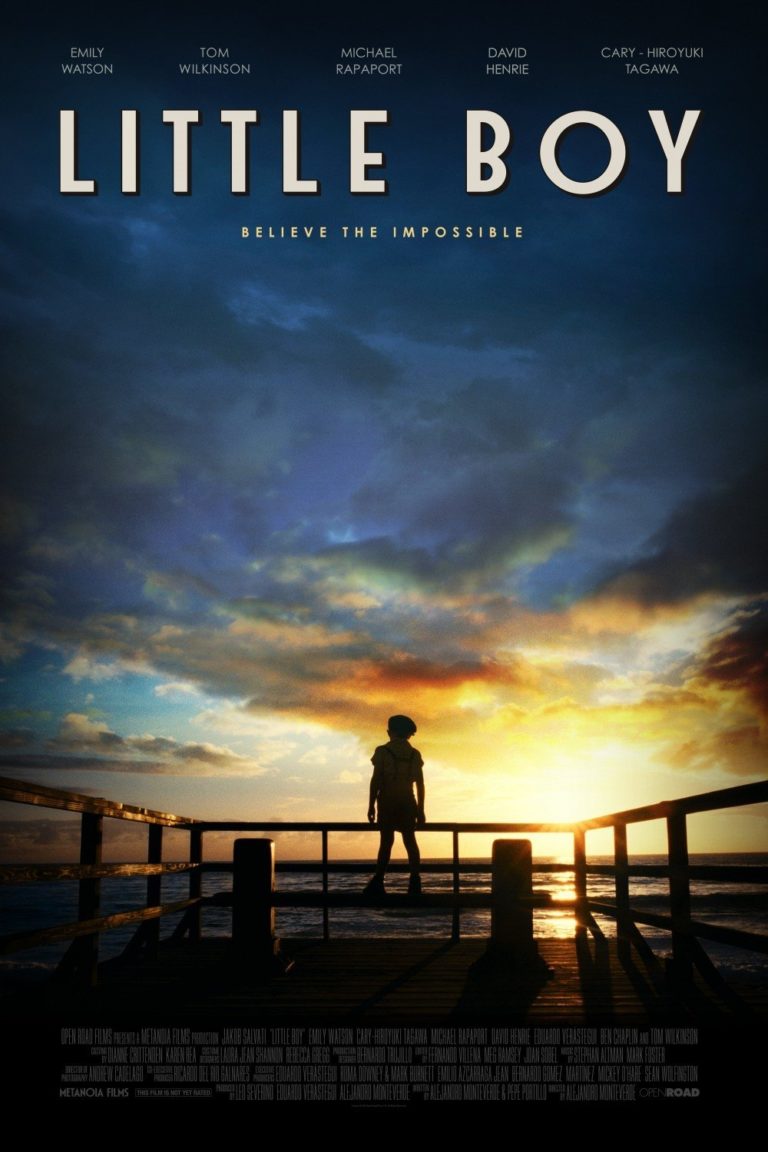 LITTLE BOY opens with the hero, known as “Little Boy,” telling viewers everybody in his California beach town disliked him because, at 8-years-old, he was hardly growing physically. His father was his best friend. With his father’s enabling, Little Boy gets interested in a comic book magician who’s actually a world-saving spy. The magician’s motto becomes the father and son’s motto, “Do you believe?” Sadly, America recruits the father to fight in the Philippines against the Japanese. When the comic book hero performs a stage show, he chooses Little Boy to supposedly move a bottle across the table through magical thinking. For the rest of the movie, Little Boy tries to bring back his father with magical thinking. The fanciful sets, tremendous cinematography and wonderful acting make LITTLE BOY worth watching. However, many Christians will take issue with the movie’s magical thinking and ontological nominalism, although a priest tries to explain the difference between magical thinking and real Christian faith. Also, some violence means this isn’t a movie for young children. LITTLE BOY should have been more careful about seeming to endorse magical thinking.

(PaPa, CC, FRFR, H, BB, L, VV, AA, M) Mixed pagan worldview with strong, overt Christian, redemptive elements, but diminished by magical thinking, which is refuted several times but still becomes a powerful plot motivator, and also diminished by some humanism, which is subtly refuted, and by other eclectic elements, but with a strong moral base, however; one light obscenity; some strong violence includes Japanese man beaten up and kicked, boy gets beaten up, vandals try to set fire to a home and vandalize the home, war footage of people being shot by the Japanese in the Philippines during World War II, and the aftermath of the atomic blast at Hiroshima showing dead bodies; a doctor who wants to have an affair with a husband who’s at war, but no sex; no nudity; alcohol use to get drunk but very quick; no smoking or drugs; and, racism, jingoism, vandalism, and bullying.

LITTLE BOY is a beautifully photographed, artistic piece of magical realism, but the movie’s overt Christian, redemptive, moral elements are diminished by too much magical thinking. Magical realism was a popular genre in Europe in the 1960s and 70s, but has a history going back to 1920s silent movies. The movie opens with a voiceover of the hero, who’s known as “Little Boy,” who talks about his growing up in a rustic California beach town named O’Hare. As he notes, this town is almost picture perfect, almost an idealized view of a 1940s beach village. He talks about how everybody in the town disliked him because, at 8-years-old, he was not growing physically at all. His father was his best friend, James Busbee. With his father’s enabling, he got interested in a comic book magician who is actually a world-saving comic book spy. The motto of the magician became the father and son’s motto, “Do you believe?” Regrettably, his father is recruited to fight in the Philippines against the Japanese. The bullies in town love to beat up Little Boy and make fun of him. However, when the hero of the comic book comes to O’Hare to give a stage live show, he chooses Little Boy from the audience to supposedly move a bottle across the table through magical thinking. For the rest of the movie, Little Boy tries to bring his father back with magical thinking. He also gets involved with his brother, London, in trying to vandalize the only Japanese residence in the town. His brother gets thrown in jail, and Little Boy gets sent to the priest. The priest tries to explain to Little Boy that, with God’s help and his prayers, God can move the bottle. When Little Boy says he can’t do it, the priest gives him several things to do to be filled with faith, including feed the hungry, clothe the naked, shelter the homeless, visit the prisoner, bury the dead. The priest also tells him that he must say five “Hail Marys” and befriend Hashimoto, the elderly Japanese man whose house he tried to vandalize. Slowly but surely, Little Boy becomes friends with the Japanese man. Hashimoto, in turn, plays cards with the priest. He is a humanist, and the card games end up as a dialogue between faith and humanism. Meanwhile, Little Boy continues to try to use faith and magical thinking to bring back his father. His doctor tries to use Little Boy’s abnormality to have an affair with his mother. Eventually, some of the townspeople trash Hashimoto’s home and beat him up. The town’s attitude toward Little Boy changes when the nuclear bomb called “Little Boy” is dropped on Hiroshima, but Little Boy realizes from news reports the cost in lives. The Army says Little Boy’s father is dead, his faith is tested, and some questions remain. Will Little Boy’s father return? What will happen to Little Boy’s faith if God decides not to move to save his father? The fanciful sets, some tremendous cinematography, and wonderful acting make LITTLE BOY worth watching. However, many Christians will have an issue with the amount of magical thinking and ontological nominalism, although the priest tries to explain the difference between magical thinking and real faith in the Creator God, who is the key to “moving mountains.” Furthermore, the violence, including the beating of Hashimoto and the shooting of the American prisoners, though not excessive, means this isn’t a movie for young children. More importantly, the plot is very eclectic due to a premise that seems to morph throughout the movie. In the beginning, the premise is: Do you believe? In the middle, the premise is: love overcomes racism. At the end, the premise is: God does the impossible. As a result, there are moments where there is no jeopardy. These moments are saved from being boring by the movie’s beauty, but they also detract from story. That said, the filmmakers are some of MOVIEGUIDE®’s favorite people. We appreciate the fact they’re even trying to make a movie that’s special and unique. However, they should have been more careful about the movie’s elements promoting magical thinking.