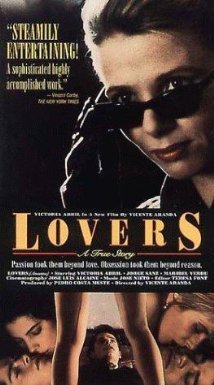 Set in Franco's Spain in the mid-1950s and based on a true story, the Spanish film LOVERS reveals a love triangle beset by seduction, corruption and murder. The characters and decor in LOVERS are lighted to project rich tonal effects and the lush cinematography contributes to the films overall sensuality. Regrettably, LOVERS contains fornication, lower female nudity and vulgar language, besides presenting a very sordid story of deceit and immorality.

The Spanish film LOVERS, winner of the Goya Award, weaves a sultry tale of seduction, corruption and murder. Set in Spain in the 1950s, this love triangle is based on a true story. Paco is looking for a job so he can marry his sweetheart, Trini. He rents a room in the apartment of a young widow, Luisa, who persuades him to sleep with her. Luisa involves Paco in some schemes as well, and before long, she dominates him. Soon, they agree to steal Trini’s savings to pay off Luisa’s gambling debts. Paco persuades Trini to travel to Madrid where they plan to marry. There, Paco steals the money from Trini while she sleeps. However, Luisa glowers, “I want you to kill her!” Paco goes back to Trini who knows he took the money. She threatens to kill herself, but he stops her. The two end up sitting on a bench where Trini begs Paco to kill her, and he complies.

The scenes in LOVERS are lighted to project rich tonal effects which contribute to the film’s sensuality. Regrettably, LOVERS contains fornication, nudity and vulgar language, besides presenting a sordid story of immorality. Although the movie ends with Paco leaving with Luisa, three days after the murder the two were apprehended by Spanish officials and brought to trial.