"The Self-Destruction of a Disordered Soul" 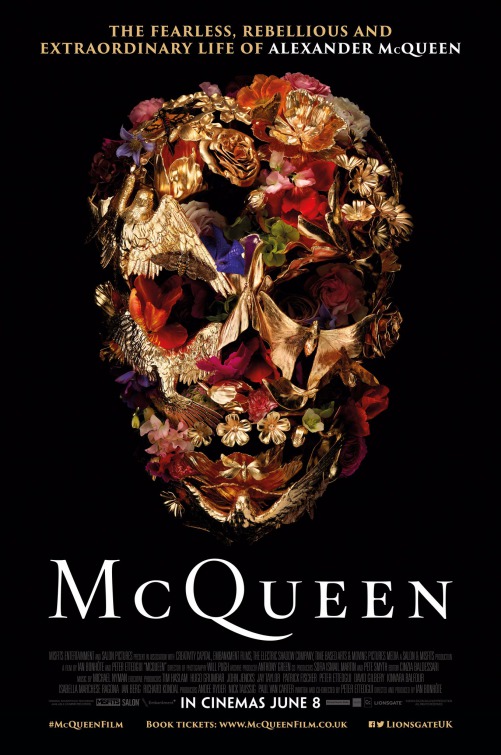 MCQUEEN is a documentary about the rise of controversial fashion designer Alexander McQueen. The movie features footage of McQueen and interviews from friends and family. Though his designs sometimes contained unparalleled beauty, they also displayed a penchant for incorporating shock value into his work. As a result, his success went to his head and his designs became darker and darker. Fueled by a fascination with the occult and drug abuse, McQueen’s work was filled with shocking, disturbing, violent, obscene images that led to his self-destruction.

MCQUEEN is fascinating when it explores Alexander McQueen’s influence on the fashion world. Viewers may also enjoy learning about the charity he established before his death that serves underprivileged future fashion designers. However, the movie validates McQueen’s Romantic view of artistic expression as a means to shock and provoke audiences. “If I haven’t made you feel anything, I haven’t done my job,” he says. The movie also makes several references to McQueen’s fascination with the occult, which highly influenced his work. As a result of all this, McQueen’s work contained obscene, violent content and ugly, unacceptable elements.

(RoRoRo, HoHoHo, FRFRFR, OOO, PCPC, FeFe, LL, V, SS, NN, A, DD, MM):
Dominant Worldview and Other Worldview Content/Elements:
Very strong Romantic worldview considers the use of artistic expression to shock and provoke to make as a good thing, while telling the story of a troubled, suicidal homosexual fashion designer and alleged artist who chased personal dreams and personal expression (but using shock value to get attention, which is also used as part of a set of aesthetic values) to make himself happy, with irrational relativistic comments and references about speaking “your truth,” plus subject had a fascination with the occult that influenced his work and once used rape as a warped politically correct metaphor for what he called “female empowerment”;
Foul Language:
15 obscenities and three obscene gestures;
Violence:
Two references to physical and sexual abuse, arson, and references to suicide;
Sex:
Strong sexual content includes references to homosexuality and references to rape and misogyny in a positive way;
Nudity:
Several scenes feature upper female nudity and paintings of upper female nudity;
Alcohol Use:
Two scenes of alcohol use;
Smoking and/or Drug Use and Abuse:
Smoking and several references to drug abuse and addiction; and,
Miscellaneous Immorality:
Lying, stealing, dysfunctional family relationships, poor role models, and people report that using drugs made a friend more mean.

In MCQUEEN, family members tell the tragic story of Lee Alexander McQueen, a famous fashion designer. The documentary is divided into five chapters. The first chapter titled, “Jack the Ripper Stalks His Victims” includes Interviews with his mother Joyce McQueen and his aunt Janet as well as those that worked with him in the fashion world, who share about his first exposure to design while cutting clothes at Bespoke Tailoring. With a proactive attitude and natural talent, he landed a job in Italy early in his career, much to the surprise of other fashion designers. Then, he went to school in London at St. Martin’s School of Art. It is in London where he found his niche, designing clothes that were beautiful and classy yet revealed a dark side of himself, drawing on influences like the story of Jack the Ripper which he incorporated into his clothes.

The second chapter called “The Highland Rape,” includes interviews with his boyfriend, Andrew Groves, who, along with friends, refer to him as Lee. Andrew recalled their exploits in the pub and nightclubs. Also featured is his friend Alice Smith who tells viewers he created his first fashion collection with no resources except a determined spirit. McQueen said, “Every fashion designer wants to create an illusion through things that fascinate and disturb people. Clothes are really beautiful things to create, but there is also reality. … I tell it the way it is.”

Friends and family also speak about the emotion he wanted to invoke through his work. “If I’m not creating an emotion,” McQueen once said, “I’m not doing my job properly.” Whether it was repulsion or exhilaration didn’t matter, as long as viewers came away feeling something.

McQueen also speaks about his process of coming out to his parents and dealing with the pain and lack of acceptance of his lifestyle from his father, a seemingly sad part of an overall well-crafted movie. Through that footage, viewers feel bad for Lee as he carried around the burden of his homosexual lifestyle. It also shows footage of his most controversial lines called “The Highland Rape,” featuring torn clothes, bare breasts and women staggering around as if they had just been raped. McQueen claimed he did it to “empower” women. He also spoke candidly about his mother being a victim of physical abuse and about watching his sister be strangled by their abusive father at age 8 as well as being the victim of molestation by his father’s brother-in-law.

Chapter three, titled, “It’s a Jungle Out there” showcases interviews with Mira Lee, friend and hairstylist. Mira, along with assistant designer Sebastian Pons, recount the story of when they traveled to Paris to design a handbag for Givenchy. As critics wanted to see him crash and burn, McQueen instead thrived, leaving his critics in the dust. This is also when McQueen began his meteoric rise into stardom, but it is at this point that stardom went to his head, leading him to mistreat the people closest to him. His fashion line, also titled, “It’s a Jungle Out There,” showcased models as animals.

Chapter Four, “Voss,” tells of McQueen’s increased drug use and the way those drugs changed him as a person, a man who was already deeply troubled. This chapter also tells of McQueen’s transformation into a persona using his middle name Alexander, completely different physically and emotionally than Lee.

The last chapter, “Plato’s Atlantis,” tells of the death of McQueen’s friend, Isabella Blow, as well as his mother, and the devastating toll it took on him. He dedicates his collection “La Dame Bleue,” to Isabella. As his anger over these losses grew, his work grew darker in its appearance. The movie’s ending talks about McQueen’s plan to take his own life, a plan at which he eventually succeeded.

The documentary has its high points as it highlights a hard work ethic, and a man determined to achieve his dreams no matter what the cost. It also showcases McQueen’s sometimes breathtaking visual flair. However, that’s where the high points end. Ultimately, the movie validates McQueen’s Romantic view of artistic expression as a means to shock and provoke audiences. “If I haven’t made you feel anything, I haven’t done my job,” he says. The movie also makes several references to McQueen’s fascination with the occult, which highly influenced his work. As a result of all this, McQueen’s work displayed in the movie includes images of bare breasts and positive references to homosexuality, rape and misogyny, along with crude references to male and female body parts. Perhaps it’s no surprise that such dark, obscene, violent visions eventually led to drug abuse and suicide.

The Good News is that we don’t have to wallow in such disturbing visions. God offers us something better and more beautiful in Jesus Christ.

MCQUEEN the movie and the artist are repulsive. Truly great art celebrates beauty and discovers truth.