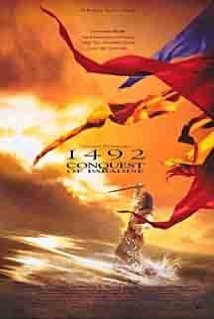 1492: CONQUEST OF PARADISE is an ambitious, epic treatment of the life and voyages of Christopher Columbus. Regrettably, while 1492: CONQUEST OF PARADISE offers an intriguing, romantic portrait of Columbus as a passionate adventurer, it still falls short of giving credit to the God who inspired him, and it often implies that paganism is just as good as, if not better than Christianity. Also, it contains brief nudity, some suggestive dialogue, cursing God, and much bloody, graphic violence.

1492: CONQUEST OF PARADISE is an ambitious treatment of the voyages of Christopher Columbus. In the midst of the Spanish Inquisition, Columbus (Gerard Depardieu) is granted an opportunity to speak his case for sailing across the Atlantic to China at the University of Salamanca. His theories are regarded as heretical by everyone except for Sanchez, advisor to Queen Isabella (Sigourney Weaver). Eventually, Isabella finances his expedition. Columbus sets sail and weeks later, discovers an island paradise. He leaves 39 men behind and sails back to report to Isabella. Although disappointed at the lack of gold, Isabella authorizes another voyage. When the second expedition arrives, they find that the original group have been murdered by the natives. When a rebellion ensues, Columbus prevails, but word gets back to Spain of the disarray in the colony, and he is recalled and imprisoned. Years later, he is freed and allowed to return to explore the mainland.