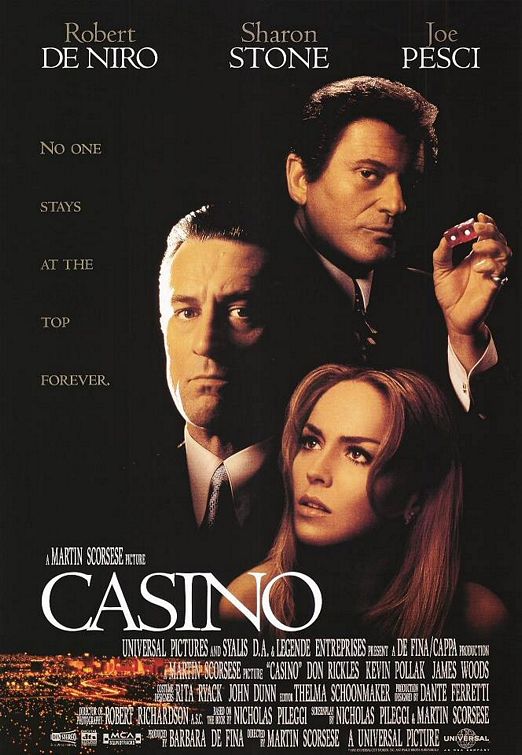 CASINO is three hour look at gangsters in Las Vegas from 1973 to 1983. If, as God's word tells us, bad company corrupts good character (1 Corinthians 15:33 (NIV)), then this nostalgic look at the mob's control of Las Vegas could help to corrupt millions of movie goers. Starring Robert De Niro, Joe Pesci and Sharon Stone, it is an ultra-violent, obscenity filled glorification of sin and corruption. Wise Americans will avoid the company of CASINO.

(NA, LLL, VVV, SSS, NNN, A, D, M, Ab) Pagan worldview extoling gangsterism; 553 obscenities, 17 profanities & 3 blasphemies; ultra-extreme violence including stabbing a man with a pen with bloodshed, kicking, beating, many execution deaths, suffocation, pounding a man's hand with a hammer, breaking every bone in a man's body with a baseball bat, burying a man alive, blowing men up, ramming man's head through door, slowly crushing a man's head in a vice, & other extreme mafia violence; fornication, adultery, fellatio, [[[{{{Remember to use one comma when there is a sequence of 3 items and a comma after every item when there is a sequence of 4 or more: "1, 2 and/or 3," or "1, 2, 3, and/or 4, or more"}}}]]] & lots of sexual suggestiveness & prostitution; full female nudity & partial male nudity; heavy cocaine use, alcohol consumption, barbiturates, smoking, & other drugs; gambling, theft, extortion, stealing, skimming, cooking the books, & cheating; and, plastic Jesus & associating Las Vegas with Lourdes.

CASINO is three hour look at gangsters in Las Vegas from 1973 to 1983. Ace Rothstein (Robert De Niro) runs the Tangiers casino. Nicky Santoro (Joe Pesci) provides muscle. Ace is sent to The Tangiers by the mafia bosses in Kansas City to make the casino produce the maximum profits for them. Ace informs us that everybody is skimming, and everybody is watching everybody else skim. In the midst of this corruption, Ace notices Ginger (Sharon Stone), whose greed is so pronounced that he falls for her. She tells Ace that she doesn’t love him, but he buys her affection and they marry. As time passes, Ginger grows to hate Ace, falls into an alcohol/drug craze and runs away with her pimp boyfriend several times. Eventually, the FBI closes in on the mob, and the mob silences everyone who can talk. In the end, Ace complains about the big corporations taking over Las Vegas and waxes eloquent about the good old days when the mob ran the town.

As far as gangsters movie goes, this is Martin Scorsese trying to one up his classic expose, GOODFELLAS: the violence is more vile; the soullessness is more pronounced; and, the evil is more pervasive. CASINO is a textbook on sin telling you how, when, where and why to do it. The problem is that this movie has no conscience and no heart. Wise Americans will avoid the company of CASINO.