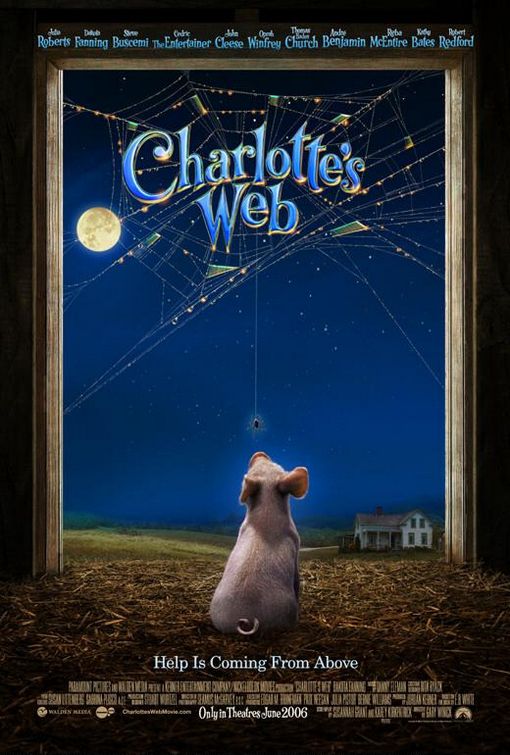 CHARLOTTES' WEB is a live action movie of the beloved children's novel. Dakota Fanning stars as Fern, a farm girl in the rural village of Somerset who rescues a small runt pig she names Wilbur. Fern keeps Wilbur in her uncle’s barn across the road. Wilbur misses Fern and makes friends with a spider named Charlotte. The other animals leak the news to Wilbur that he's going to the smokehouse near the barn to be prepared for the Christmas feast. Charlotte promises to save Wilbur, which results in a series of radiant miracles.

CHARLOTTE'S WEB is a delight for children of all ages! It is a brilliantly plotted movie with constant jeopardy, although paced in a lyrical way that will bless children. All the cardinal virtues are extolled and lived out, including laying down your life for your friends, love, friendship, humility, and thanksgiving. CHARLOTTE'S WEB is one of the most pristine movies of all time. It shows the nature of a miracle, a sign of God's grace penetrating ordinary life. Parents and grandparents should take their children, and invite their friends and neighbors to take their children, to see CHARLOTTE'S WEB.

(BBB, CC, PPP, E, V) Extremely moral worldview with one positive reference to God's Grace, many references to miracles, many inferrences about intelligent design, lots of redemptive actions with Christian, biblical values, including laying down your life for your friends, love, friendship, thanksgiving, humility, and a consistently positive view of American, small-town, rural life, plus very minor animal rights inferences, seemingly mitigated by the Christmas feast; no foul language, but the cows pass gas several times, even dispensing an obnoxious character with the smell; crows try to attack rat, some slapstick comedy where rat almost gets killed, some close calls, little pig charges into fence and bumps his head several times, but all this action violence is very mild; no sex, but geese and spider have babies; no nudity; no drinking; no smoking; and, nothing else objectionable.

CHARLOTTE’S WEB is a humble, radiant miracle for children of all ages that will become a family classic, especially with the younger crowd. Rather than frenetic, CHARLOTTE’S WEB is a lyrical, well-made, entertaining, jeopardy-filled movie that will bring tears to one’s eyes – tears of thanksgiving, loss, hope, and joy. It is one of the most beautifully, staged, designed, and photographed movies ever.

Based on the beloved children’s book by E.B. White, the movie is set in the small rural village of Somerset. A young farm girl named Fern, played beautifully by Dakota Fanning, rescues a little pig that she names Wilbur. Her father was going to kill Wilbur since he is the runt of the litter and has been rejected by his mother and siblings.

The plot thickens and the action intensifies when little Wilbur gets too big. Fern has to take him across the lane to her uncle’s farm to be raised by her uncle for Christmas dinner.

Sweet Wilbur misses Fern. He makes friends with a spider named Charlotte. The other animals leak the news to Wilbur that he is a “spring pig” who will not see snow because he’s going to the dark, gloomy smokehouse. Charlotte promises to save Wilbur. She tries to do so by writing messages in her web, the first one being “some pig” and another being “radiant.” Soon, the whole county is looking at these marvelous messages in Charlotte’s web and focusing on cute Wilber.

Fern’s uncle, Mr. Zuckerman, decides, with not-so-subtle prompting from Fern, to take Wilbur to the county fair because, after all, he is “some pig.” It becomes clear, however, that the pig in the adjacent pen, who is gigantic, will win first prize. Also, Charlotte the spider is getting old. She barely writes in her web the word “humble” before laying her eggs. The word “humble”; however, inspires the county fair judges to suddenly recognize the value of little Wilbur. The ending is poignant and will make all but the hardest heart cry.

Once upon a time as a member of the National Association of Television Arts and Sciences, I judged the National Emmy Awards for children’s programming. The other judges would pick Nickelodeon programs that were often frenetic, and I would pick Mr. Rogers, who believed that you need to give children time to reflect on the story. CHARLOTTE’S WEB is a brilliantly plotted movie with constant jeopardy, but it is also paced in a lyrical way that will bless children. Surprisingly, it is produced in part by Nickelodeon.

The special effects in CHARLOTTE’S WEB are superb. The animals speak so naturally that, even if you’ve been awed by BABE, you will fall deeply in love with these barnyard characters. The camerawork and set design is elegant, radiant and gorgeous. Seldom has small-town rural America looked so beautiful (though the movie was shot in Australia). The casting is impeccable.

CHARLOTTE’S WEB makes the consistent point that this is an ordinary town with ordinary people, but if you reflect on the intricate beauty of creation, you will realize that nothing could be more miraculous than that. Humility, loyalty, thankfulness, and all the good cardinal virtues are not only extolled but also lived out in these wonderful ordinary creatures. Even Templeton the rat learns to think of others beside himself, although he doesn’t want anybody to know he’s got a kind heart.

There is some action and slapstick violence in CHARLOTTE’S WEB. For example, Templeton escapes a falling butcher’s knife, two attacking crows, and a rolling egg. This violence is very, very mild, however. There are also a few passing gas jokes by the cows, but again, they’re very mild. In fact, CHARLOTTE’S WEB is one of the cleanest, most pristine movies of all time.

This movie is such a delight to watch that MOVIEGUIDE® hopes it will find a gigantic audience. Parents and grandparents should take their children, and invite their friends and neighbors to take their children, to see CHARLOTTE’S WEB. Along with THE NATVITIY STORY, CHARLOTTES’ WEB shows the nature of a miracle, a sign of God’s grace penetrating ordinary life.