"A Night With the King" 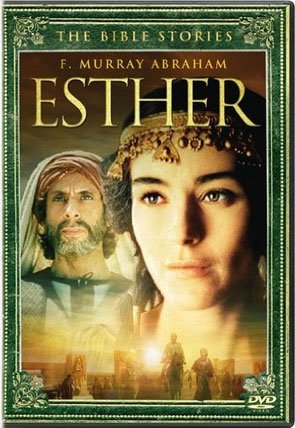 ESTHER is a dramatized version of the Old Testament story depicting one of Ancient Israel’s heroines. Esther lives in the Persian city of Susa as a Jewish exile under King Ahasuerus. The King exiles his first wife, Vashti, for disobedience. His advisers suggest he gather up beautiful virgins from his empire and choose one to be his next queen. Esther is taken into the King’s harem. Her beauty and quiet wisdom impress the King, and she’s chosen as queen. When the King’s chief advisor seeks to annihilate the Jews with a royal edict, Esther is forced to make a courageous decision. Will she go before the King and risk death on behalf of her people?

A remastered TV movie, ESTHER is well made for its time. The acting progressively improves as the storyline unfolds. ESTHER does an excellent job implying violence and sexuality without graphically depicting either one. However, the content warrants caution for older children. Despite this, ESTHER provides an excellent role model of godly womanhood as she shows herself to be kind, compassionate, obedient, and possessing strong faith in God.

(CCC, BBB, V, S, AA, M); Very strong Christian, biblical worldview which emphasizes the values of obedience, respect for authority, kindness, compassion, faithfulness, and trust in God movie is also faithful to the biblical narrative of Esther found in Scripture and depicts the value of prayer, fasting and trusting in the Lord; no foul language; light violence with a battle scene, an assassination plot, men push a woman up against a wall as if to rape her, and a man is hanged upon a gallows; light sexuality with a woman asking a servant a question regarding sex, a kissing scene, implied sex between a man and woman, and a light kiss shared between a married couple; light nudity as a man starts to undress a woman but no explicit nudity is shown except for a baring of her shoulders and a glimpse of her bare back as she lies in bed; moderate drinking as the King and his officials are shown drinking in several scenes and the King is shown clearly drunk in one scene; no smoking or drug use; and, stealing, lying.

ESTHER is a dramatized version of the Old Testament story depicting one of Israel’s heroines of the faith and her dramatic act of courage on behalf of her people. A biblically faithful television movie, ESTHER is well made for its time and the acting progressively improves as the storyline unfolds, but caution is advised for some light violence and implied sexuality.

Esther lives in the city of Susa with her cousin, Mordecai, as Jewish exiles under the Persian king, Ahasuerus. The King is a selfish, moody and even childish king who banishes his first wife, Vashti, in a moment of drunken anger when he calls for her to appear before him and his officials but she refuses to obey.

Though Mordecai desires to find Esther a good Jewish husband, before this can be arranged, the King demands all the beautiful virgins in his empire must be gathered together in his harem so that he might choose from among them a new queen. Before she’s taken, Mordecai instructs Esther to hide her Jewish heritage from everyone within the palace because he fears for her safety. Esther is then swept into the King’s harem, where she’s prepared by the King’s chief eunuch, Hegai, for her night with the King. When Esther’s turn comes to be with King, she finds favor in his sight because she is quiet, wise and beautiful. After his night with her, the King declares her to be his new queen.

ESTHER is a remastered version of a television movie made in the 1990s. It is well made for its time and the acting progressively improves as the storyline unfolds climaxing in a very emotionally wrought scene where Esther, Mordecai and all the Jewish people pray to the Lord and plead for deliverance. The movie does an excellent job of implying scene appropriate violence and sexuality without graphically depicting either one. However, the combined elements of drunkenness, mild violence and the implied sexuality of Esther’s night with the King make this movie unsuitable for younger children and cautioned for older children. The biblical narrative is faithfully represented in this movie. The character of Esther provides an excellent role model of godly womanhood as she shows herself to be kind, compassionate, obedient to authority, and possessing strong faith and trust in God.