HOW TO BE SINGLE

"How To Be Self-Involved" 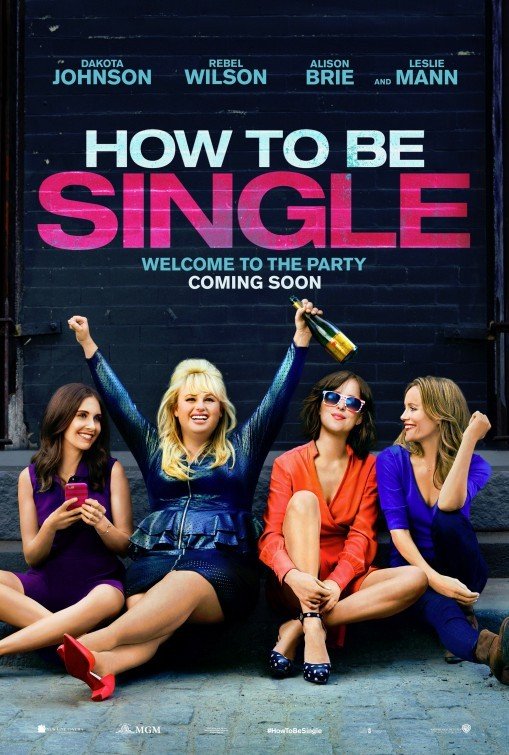 HOW TO BE SINGLE is a comedy about four young women trying to manage relationships and love. Alice has been in a relationship with Josh for years but feels she doesn’t know herself. She wants to explore herself and be independent. After moving to New York, Alice meets Robin, a young, fun loving girl. At one popular bar, they meet the owner, Tom. Tom sees Lucy, another single lady, at his bar. Lucy’s there solely to use the Internet to set up dates. When Alice and Robin come home late, they meet Alice’s sister who’s spent her whole life focusing on her job.

HOW TO BE SINGLE has too many characters and subplots. Also, the movie skips months ahead for no reason. HOW TO BE SINGLE has a strong humanist worldview. The ultimate message is to love yourself, think of yourself and don’t worry about others. It’s much like SEX IN THE CITY, with free sex, no commitment and no consequences. Despite some funny, entertaining moments, HOW TO BE SINGLE mostly contains vulgar humor, lots of foul language and some substance abuse.

(HH, Ro, B, Ho, LL, SS, N, AA, DD, MM) Strong humanist worldview with a self-centered focus, plus Romantic elements of following your heart with no repercussions, mitigated slightly by moral, positive portrayal of motherhood, plus some homosexual references; 40 profanities, one use of Jesus’ name in vain, 18 obscenities, 14 “f” words; no violence; strong sexual content includes promoting sex outside of marriage, promoting one night stands, sex scene, kissing, vulgar comments about male and female private parts, comments about trying homosexuality; man is nude and seen from back, women in underwear; drinking and drunkenness; implied smoking of marijuana; and strong miscellaneous immorality and poor thinking includes lying, deceit and moral relativism.

HOW TO BE SINGLE is a comedy about four ladies trying to manage relationships and love. HOW TO BE SINGLE has a strong humanist worldview promoting a lack of commitment and vulgar humor.

Alice has been in a relationship with Josh for years but feels she still doesn’t know herself. She wants to take a break to explore herself and see whether she can live independently from Josh.

After moving to New York, Alice is finally on her own and meets Robin, a young, wild, fun loving girl. Robin doesn’t really take her paralegal job very seriously, but welcomes Alice into the firm and coaxes her to go out to a club after work. The two party until they have to get to work the next morning, which starts to become a habit.

Robin just wants to have a good time, but Alice is used to being in a relationship and soon meets Tom at a bar. Tom is the bar’s owner, and Alice and Tom have a fling.

Alice discovers the single lifestyle doesn’t suit her, so she returns to Josh and tells him she wants to get back together. However, he says he’s with someone else.

Now, Alice has to truly be single. Confiding in her sister, Meg, Alice says she hates being single. Meg on the other hand loves the independence and is completely focused on her job.

Meanwhile, Lucy is another young single woman who frequents Tom’s bar, just to get the Internet so she can online date. She believes her perfect match is online and really wants to be married. This is so funny to Tom, because for him it is so easy to find a girl, but the only girl he can’t get is Lucy.

When Meg decides to have a baby by sperm donor, she meets a young man named Ken. Ken almost immediately loves Meg and is willing to do anything to make this relationship work, though Meg tries to push him away.

Will the four single ladies figure out how to manage relationships and their individual identities?

HOW TO BE SINGLE has a humanist worldview. The movie’s ultimate message is to love yourself, think of yourself and don’t worry about other people. It is much like SEX IN THE CITY, with free sex, no commitment and no repercussions for one’s actions. This message is almost anti-commitment. In fact, it shows the decay of the family in modern society. In the real world, there is pain from broken relationships, divorce, and sadness, so why should we promote people focused purely on themselves and lack of committing, loving and supporting one another. Just as we commit to one another in the unity of marriage, God commits to us. This is not an easy thing, but it is life affirming.

HOW TO BE SINGLE has the plot line problem of having too many characters that drive different subplots. At times, the film skips to months ahead for no reason. Some of the subplots could have been completely removed. Though this is the case, HOW TO BE SINGLE has some entertaining humor, though some of it is vulgar. There’s also a lot of foul language. So, media-wise viewers probably will want to skip HOW TO BE SINGLE.