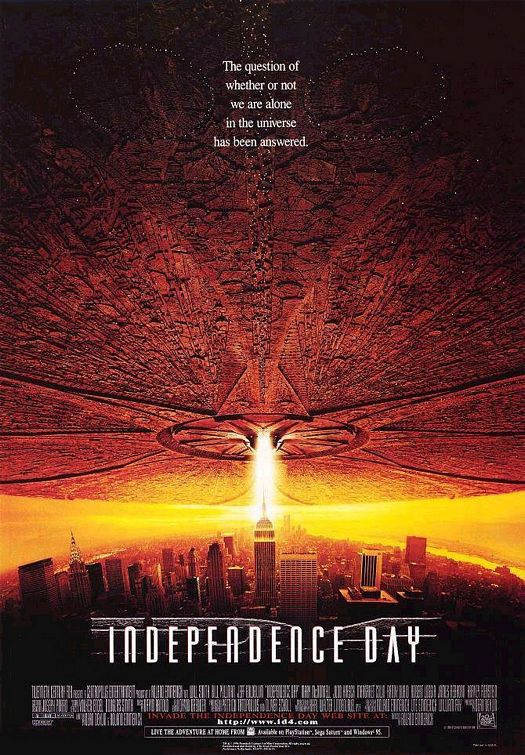 INDEPENDENCE DAY is a fun, roller coaster ride of a movie. This big-budget B-grade science fiction movie pays tribute to the sci-fi films of 1950's where the aliens from space were not nice guys, but creatures who wanted to take over the world. Marred only by too many profanities and obscenities but blessed by positive references to prayer, marriage and family, it is pure "popcorn" entertainment.

INDEPENDENCE DAY is a classic B-movie which draws on the fun sci-fi movies of the past to weave together a thrilling story. It opens with a large Star Wars-type spacecraft flying over the American flag on the moon. On earth, the Defense Department tells the President, and a technician named David realizes that aliens are attacking. Eventually, the President strikes, futilely. Meanwhile, the aliens destroy every major city on earth. The President discovers that the CIA has been hiding a captured saucer in New Mexico. David suggests that they upload a computer virus into the mother ship by flying the captured saucer back to the mother ship. He thinks that they can knock out the shields just long enough so that they can destroy the aliens.

INDEPENDENCE DAY is a fun movie. The movie moves with substantial emotion towards a satisfying climax. Good triumphs over evil, people are married, marriages are restored, prayer is upheld, faith is reclaimed, heroism is extolled, and environmentalism is mocked. Regrettably, the movie is peppered with foul language. Also, there is a brief scene in a strip club, a morning after scene of a couple in bed and some violent scenes of the alien in the laboratory. The good outweighs the bad, but the bad could have been jettisoned in space.