"God Blesses Those Who Lovingly Obey Him" 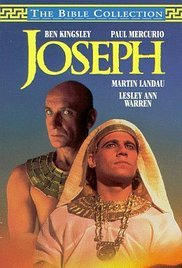 The story of JOSEPH is a compelling tale about a boy, sold into slavery, who must rely on a God in whom no one believes. The main character, Joseph, must choose amid insurmountable trials whether to stay true to the God of his father and obey what he knows is true or fall into the sin of those whom he now serves. After becoming a slave and reaching the pinnacle of power in Egypt, Joseph learns the faithfulness of God and the power of forgiveness.

The quality JOSEPH is superb, surpassing that of other retellings of Joseph’s story. Not only is the movie biblically accurate, but the cinematography, musical score and acting tell a story that’s both visually stunning and captivating in its realism and emotion. JOSPEH is a highly accurate biblical story and tells Joseph’s story the way the Bible has it written. There is some action violence and innuendo, which warrant caution for younger children. However, JOSEPH is morally and spiritually inspiring and dramatically captivating. Joseph retains his faith and uses it in powerful ways that viewers can emulate.

(BBB, CC, FR, Pa, L, VV, S, N, AA, M) Strong biblical, Christian worldview that is highly accurate and true to the biblical accounts, with representations of Non-Christian and Egyptian pagan worldviews, but none of them overshadow Joseph’s faith in the One True God and the ending’s spirit of forgiveness; no foul language, some coarse joking, talk about women (in reference to sex), name calling (“whore”), talk about circumcision; multiple cases of action violence, such as attacks with swords, physical attacks and some death (non-explicit), including a hanging; attempted adultery (married woman tries to seduce a man), touching of bare chest and arms, a man goes into a prostitute’s bed, nothing explicit it shown, a few kisses on the cheek and kisses between a husband and wife; partial/mild nudity includes upper male nudity throughout (shirtless slaves), child’s bare buttocks (bath time), lady in a towel (bath time), man’s buttocks and legs (implied sex); drunkenness among Joseph’s brothers as they drink wine; no smoking or drug use; and, slavery is depicted, destruction of a village, bad role models (Joseph’s brothers and the slave drivers of Egypt), lying (brothers lie about Joseph’s “death”), and dysfunctional family matters until the redemptive ending.

The classic television movie JOSEPH has been remastered in a wonderful way. It’s a compelling movie based on Scriptural accounts about a boy, sold into slavery, who must rely on a God in whom no one around him believes. The main character, Joseph, must choose amid insurmountable trials whether to stay true to the God of his father and obey what he knows is true or fall into the sin of those whom he now has to serve.

JOSEPH begins at a slave auction where the harshness with which slaves are treated is shown. Here the story begins as a wealthy man named Potiphar buys a Canaanite slave known as Joseph. Having never worked a day in his life, Joseph goes to live as a slave in Potiphar’s house. However, because of his faithfulness to God and his master’s kindness, Joseph rises in the ranks and becomes the overseer of Potiphar’s house. Due to the sinfulness of Potiphar’s wife and Joseph’s righteous response, however, Joseph’s character is called into question.

Potiphar interrogates him and leads Joseph to explain why he would never disobey God or disrespect his master. In his explanation, Joseph tells of his life before becoming a slave. He tells Potiphar how he was Jacob the Canaanite’s son, the first son of his father’s second wife Rachel. Then he explains how he had a sister, from his father’s first wife, and how she was defiled, leading him to vow he would never disrespect a woman.

Joseph tells Potiphar how Joseph was special in his father’s eyes, and as he grew older, his older brothers began to despise him. Eventually, this animosity comes to a breaking point. While he was checking his brother’s shepherding progress, the brothers plotted to get rid of him. They threw him in a well. Then, when morning came, they sold their brother into slavery for silver. After Potiphar heard this, he knew that Joseph was innocent, but because of propriety he had to send Joseph to jail, which was a mercy because, at the time, the penalty demanded was death.

Joseph is imprisoned for seven years, but during this time the Lord used him to show His goodness and elevate Joseph’s position inside the prison. Because of his status in the prison and the knowledge revealed to him from God, Joseph is able to interpret the dreams of two of Pharaoh’s prisoners. Both interpretations come to pass, and the Lord uses them when the Pharaoh himself has a dream no one can interpret. One of the prisoners, who is now back in the palace, tells Pharaoh of how a man in the prison interpreted his dream, and it came to pass. Pharaoh calls on Joseph, and the Lord grants Joseph the ability to interpret Pharaoh’s dream. The Pharaoh, seeing the power of Joseph’s God and the truth He speaks, elevates Joseph to second in command over all of Egypt, with only himself being greater. Joseph thrives yet again through the Lord’s great providence and leads Egypt into its most prosperous time.

When the second half of Joseph’s interpretation, a seven year famine, comes to pass, he is able to aid not only all of those in Egypt but also those across the land. Joseph’s brothers also come to find grain in the famine. However, when they see their brother, they don’t recognize him. Joseph sends them back home for their youngest brother to test them and see if they have changed. When they return with their youngest brother and fight to keep him safe, Joseph finally reveals himself and forgives his brothers for all they did, for he can see that the Lord used his brothers’ sins to save nations. Joseph then calls his people to live with him in Egypt and is able to see his father again after many years. Throughout Joseph’s story, it becomes clear that it was through Joseph’s trials that God fulfilled His plans and remained faithful to Joseph and his family, until the end.

The quality of JOSEPH is superb. Not only is the movie biblically accurate, but the cinematography, musical score and acting tell a story that’s visually stunning and captivating in a real and emotional way. The filmmakers strive to tell the story of Joseph the way the Bible has it written. That said, the movie has some action violence, innuendo and language that may not be suitable for younger children.