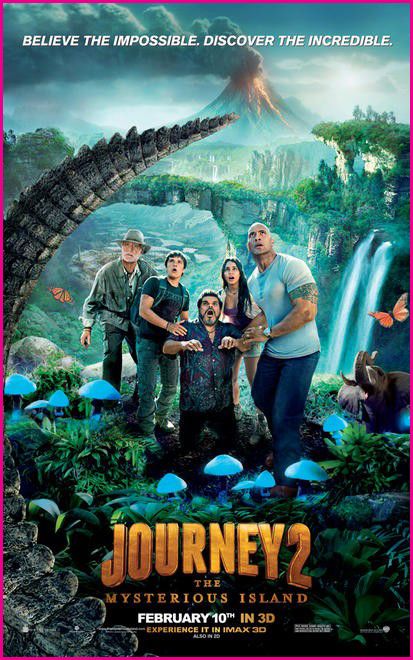 JOURNEY 2: THE MYSTERIOUS ISLAND is a fun-filled adventure for the whole family. This time, teenager Sean Anderson goes to the South Pacific with his stepfather, Hank, to find Sean’s missing grandfather. Sean’s grandpa sent him a coded message leading them to the Mysterious Island from the famous Jules Verne book. Despite a strange hurricane blocking the way, they get to the island. Along for the ride is a helicopter tour pilot and his pretty teenage daughter. Sean’s grandfather is safe, but they discover the island is sinking back into the sea sooner than they calculated. The only way to escape is to find Captain Nemo’s hidden submarine, the Nautilus.

JOURNEY 2: THE MYSTERIOUS ISLAND is another fun outing. Michael Caine adds a touch of class and heart as the grandfather. Also, Dwayne Johnson adds some heartfelt entertainment of his own. Best of all, the movie eventually delivers a positive message celebrating family bonds. Moreover, there is no foul language or other crude content. The message doesn’t get in the way of the action, humor, and suspense in JOURNEY 2: THE MYSTERIOUS ISLAND. Kudos to the cast and crew!

(BBB, PP, V, M) Very strong moral worldview with a strong, positive view of America and Americans, plus a celebration of family bonds; no foul language, but a reference to big bird dropping and man falls into goo in giant lizard egg; light action violence includes teenager on motorcycle tries to escape police, motorcycle jumps into pool, helicopter enters strange hurricane and crashes on island, giant lizard and giant birds chase people, people ride giant bumblebees, electric eel endangers teenager and his stepfather, dangerous rock slides, teenager sprains ankle badly; no sex scenes but older teenage boy admires older teenage girl, who’s pretty, when he sees her, they kiss at end, and they fall down together, but nothing salacious occurs; no nudity; no alcohol; no smoking; and, teenager gets off easy after breaking into a satellite facility to retrieve a message and evading police, plus teenager has shaky relationship with stepfather, but everything’s resolved positively by the end.

JOURNEY 2: THE MYSTERIOUS ISLAND is a fun-filled adventure for the whole family. The goal is mostly to entertain, a task the movie does well, but there’s also a strong pro-family message for viewers as the story runs its course.

The movie opens with young Sean Anderson getting in trouble with the police for breaking into a satellite facility and trying to avoid capture. His firefighter stepfather, Hank, gets everyone not to press charges. He tries to communicate with Sean, but the two don’t get along. Eventually, however, Sean opens up to Hank and tells him he was trying to receive a coded satellite message from his grandfather. Sean believes the message tells him the location of the actual “Mysterious Island” from the book by Jules Verne.

They decode the message together and discover it leads to some coordinates near the island of Palau in the South Pacific. Sean wants to go there, and Hank agrees to take him. He thinks that, once Sean discovers the island doesn’t exist, they can go back home to Dayton, Ohio.

Of course, when they get there, they discover that the island does exist. To get there, they have to ride a tour helicopter into the eye of a strange hurricane. Along for the ride is the copter’s owner, Gaby, and his pretty teenage daughter, Kailani.

On the island, they find Sean’s grandfather, Alexander. Alexander tells them the island is the location of the lost island of Atlantis. Every 140 years, the island disappears into the sea again because of volcano activity. Sean’s stepfather was a Navy Seal. He discovers the island is already starting to sink again. The only way to escape is to find Captain Nemo’s hidden submarine, the Nautilus.

JOURNEY 2: THE MYSTERIOUS ISLAND is another successful piece of family entertainment from the folks behind 2008’s JOURNEY TO THE CENTER OF THE EARTH, which told Sean’s first adventure into Jules Verne’s universe. Michael Caine adds a touch of class and heart as the grandfather. Also, Dwayne Johnson adds some heartfelt entertainment of his own. In fact, he even sings a surprisingly funny, heartwarming, and tuneful version of “What a Wonderful World” in one scene! Like the previous movie, this is a science fiction movie for families with pre-teen children, so some purists may be upset, but not this particular purist or his MOVIEGUIDE® colleagues.

Best yet, the new movie seems even more family-friendly than the previous movie. Younger children will be more excited and thrilled than scared. There’s no intense violence in JOURNEY 2: THE MYSTERIOUS ISLAND, but there’s plenty of action and suspense, laced with some light, playful humor. The movie eventually delivers a positive message celebrating family bonds. Also, there’s no foul language or other crude content. The filmmakers and folks at Walden Media and Warner Bros. should be congratulated for keeping this series going by providing another entertaining, family-friendly entry.