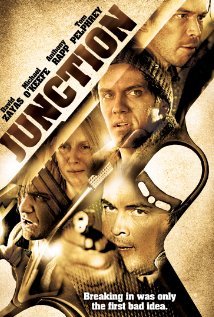 JUNCTION is one of the most jeopardy filled, dialogue rich straight-to-DVD movies in a while. The movie opens with four drug addicts in an old Buick traveling to buy some meth. David, who drives the car, enters to see the seller, Tai, who’s a truly wicked, scary human being. Tai wants David to work for him and tells him to steal a flatscreen TV for him if they want some meth. Donald discovers pedophile DVDs in the home that they rob’s attic. Donald was abused by his father as a little boy and is outraged. He beats up the owner when he comes home. The situation deteriorates from there, especially when the police show up.

For a low budget movie, JUNCTION has a lot of jeopardy and powerful dialogue. It is very confined, however, and could have been a play. The only elements that would have made it more powerful is more relief and more humor. Surprisingly, JUNCTION has no foul language, but it does have some very gruesome violence, crude references and drug content. So, extreme caution is advised for JUNCTION.

(BB, C, VVV, S, A, DD, M) Strong moral worldview with some light Christian, redemptive content; no foul language; extreme violence with beatings, people tied up, kicking people, suggestion of a body being disposed after being cut up, supposed pedophile has broom jammed down his throat, angry drug addict abuse victim almost stabs a girl with machete and kills a man with machete, pointblank shootings, knife wounds, bloody violence; discovery of pedophile DVDs but nothing shown, drug addict watches pedophile DVDs and remembers abuse by his father, and much discussion of pedophile sex (the word suck is used repeatedly); no nudity; alcohol use; drug addict goes to meth distributor to beg for some meth but is sent on an errand and never gets meth, and meth lab destroyed; and, stealing, kidnapping, bondage all rebuked.

JUNCTION is one of the most jeopardy filled, dialogue rich straight-to-DVD movies in a long time.

The movie opens with four drug addicts in an old Buick traveling to buy some meth. David, who drives the car, goes to see the seller, Tai, who’s a truly wicked, scary human being. Tai wants David, Kari, Spot, and Donald to work for him and tells them to steal a TV if they want some meth. Tai wanted to see Kari, but David lies and says Kari has herpes. Spot is furious about this, because he’s Kari’s boyfriend. The fourth addict is Donald, who seems to have some compassion.

David takes them to a house into which people have just moved. There, they steal a flatscreen TV. Donald discovers some pedophile DVDs in the attic. Donald was abused by his father as a little boy and is outraged. When the man who owns the house returns, Donald beats him to a pulp. When the daughter returns, Donald decides he’s going to kill the father to protect the daughter. When the wife returns, she tries to get Spot to destroy the DVDs.

The pressure cooker in the house builds. The police discover the car and tow it away, then surround the house. The detective, Lt. Charles, is being watched because his last situation resulted several senseless killings. JUNCTION builds to a powerful, explosive, unexpected climax.

For a low budget movie, JUNCTION has a lot of jeopardy and powerful dialogue. It is very confined and could have been a play. The only element that would have made it more powerful is some better orchestration, which would require more relief and humor. Even in the most extreme circumstances, great drama requires moments of relief, as demonstrated in many of the great Humphrey Bogart movies.

That said, this movie is much better than most independent, low budget feature movies. It demonstrates a great deal of talent. It’s not a movie, however, for everyone. Surprisingly, it has no foul language, but it does have some very gruesome violence and powerful music highlighting that violence, including jamming a broken broom down a purported pedophile’s throat. Finally, the ending is totally unexpected, and somewhat diminishes the movie’s strong moral condemnation of drugs, robbery and pedophilia.