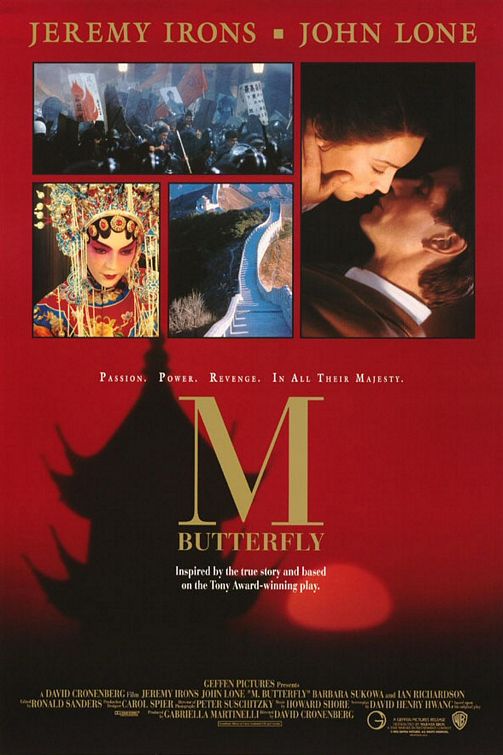 Turning on the theme of gender deception in the grotesque tradition of THE CRYING GAME, the movie M BUTTERFLY, set in 1964 Beijing, China, tells the story about a French diplomat who becomes obsessed with a Chinese opera singer, forsaking all for the singer only to be betrayed at the end. Although the movie is well-crafted with excellent timing and contains masterful acting, it regrettably perpetrates gender confusion and promotes homosexuality with the absurd logic that men know better than women how to make love to men.

Turning on the theme of gender deception in the grotesque tradition of THE CRYING GAME, M BUTTERFLY deceives to the end when the “truth” becomes semi-apparent, but the real question (and its answer) goes begging. Rene Gallimard, a French diplomat develops an obsession with a Chinese opera singer, who introduces him to the practices of “Chinese lovemaking.” She calls herself his “slave,” and he forsakes every other part of his life for their relationship. Some time later, she leaves, telling him she’s pregnant, and he goes back to Paris. Several years later, she reappears. She provokes him with a question: “Why are women’s roles in Chinese opera played by men?” She gives the answer: “Because only a man knows how a woman is supposed to act.” The film has a shocking betrayal scene, and Gallimard tells his lover: “What I loved was the lie–now, it has been destroyed.”

The film is well-crafted, with excellent pace and timing. Jeremy Irons in his role of Rene Gaillimard is powerful, as is John Lone in an extraordinary (and convincing) performance. However, in the final analysis, M BUTTERFLY further perpetrates gender confusion and promotes perverse homosexuality as preferable to heterosexuality with the absurd rationalization that men know better than women how to make love to men. Women should be furious.

Writer: David Henry Hwang (based on his play)