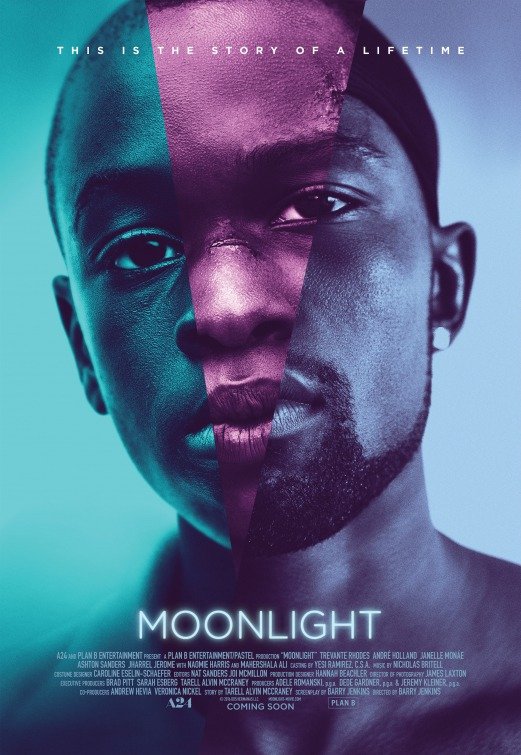 MOONLIGHT is a three-part story about a shy black boy from a broken, lower class family. Chiron has a hard-working but increasingly drug-addicted single mother. The mother’s drug dealer and his compassionate girlfriend befriend the boy. The drug dealer tries to teach Chiron how to act like a man. However, Chiron has trouble in school with some bullies. He becomes attracted to his best friend, Kevin. Years later, after serving time in prison, Chiron is a muscle-bound drug dealer when Kevin and his mother reach out to him.

MOONLIGHT doesn’t rely on a linear plot to make its points about growing up as an outcast in the black ghetto. Some of the movie’s most poignant scenes are those that evoke the protagonist’s feelings of loneliness. From a Christian perspective, MOONLIGHT isn’t strident. However, it’s essentially a homosexual, feminist, politically correct attack on masculinity. In that sense, MOONLIGHT ultimately promotes a Romantic, radical liberal and perhaps even Marxist view of society and issues of race, sex and class. There’s also plenty of strong foul language. So, MOVIEGUIDE® finds MOONLIGHT unacceptable viewing.

(RoRoRo, PCPCPC, HoHoHo, FeFeFe, C, B, LLL, VV, SS, A, DD, M) Very strong Romantic, socially liberal and politically correct, but subtle, pro-homosexual, feminist worldview and artsy critique of traditional views of masculinity in a story about a shy black boy from a broken, lower class family, with a hard-working but increasingly drug-addicted single mother, who tries to cope with his identity and his perverse sexual desires, with some Christian elements at one point regarding scenes of forgiveness and reconciliation with the newly sober mother; at least 50 obscenities (mostly “f” words), 10 profanities, uses of the “n” word, and several uses of homosexual slurs; a couple brief scenes of violence include homosexual teenager punched in face three or four times and knocked down before getting back up each time, after which a group of bullies punches and kicks him, and homosexual teenager takes a desk chair and smashes in onto the back and head of the main bully; teenage boys kiss passionately for about a minute before it’s implied one manually stimulates the other, dream sequence shows homosexual teenage boy finding his friend sodomizing a teenage girl, some graphic talk about heterosexual sex, main bully tells homosexual teenager that the teenager’s mother gave the bully oral sex in exchange for crack cocaine, and scene at end implies protagoniost may begin homosexual relationship with his friend from years ago; alcohol use; smoking and drug themes throughout, including drug dealer is made to look sympathetic in an attempt to avoid one-dimensional characters, but it’s clear that drugs have ruined the life of protagonist’s mother and have not done the boy that well either as he later also becomes a drug dealer; and, bullying, family dysfunction.

MOONLIGHT is a three-part story about a shy black boy from a broken, lower class family, with a hard-working but increasingly drug-addicted single mother, who tries to cope with his identity and his perverse homosexual desires. MOONLIGHT is not a strident movie and has some touching, light redemptive moments, but it promotes a strong Romantic, homosexual, feminist, godless worldview that attacks traditional views of masculinity, includes a lot of foul language and asserts that blacks live in a racist, sexist, anti-homosexual society.

MOONLIGHT follows the life of one young African-American boy named Chiron who is derided for being “soft” or “different” from the time he was a child, and key moments from his adolescence and adulthood that turn him into a deeply lonely homosexual man. MOONLIGHT is driven less by plot than writer-director Barry Jenkins’ desire to make audiences become fully immersed and invested in Chiron’s emotional state.

Using three impressive yet unknown actors to portray Chiron in three distinct segments breaking down important phases of the years from age 9 to 28, MOONLIGHT opens on him being gently derided with the nickname “Little” (Alex Hibbert). Little can’t fit in with other roughhousing boys and flees bullies one day by hiding in a dilapidated drug den controlled by a conflicted yet kindhearted dealer named Juan (Mahershala Ali).

Juan and his girlfriend Teresa (Jonelle Monae) take Little under their wing since it’s obvious the boy has no father figure and a mother (Naomie Harris), who’s well-meaning but constantly tired from working overtime to survive. As Little gets older, his mother sinks into a drug addiction fueled by purchases made through Juan.

Little becomes known by his real name of Chiron in high school, where the bullying against him turns vastly more vicious at the same time his lifelong friendship with a nicer boy named Kevin deepens, then crosses the line one night into a sexual encounter. When a tragic bullying incident drives Chiron to take a desperate act of violent revenge, his life is shaped toward a decade of loneliness where he reinvents himself as a musclebound Atlanta-based drug dealer named Black (Trevante Rhodes). That loneliness is suddenly broken by two phone calls: one from Kevin at 28 (Andre Holland) and another from his now-rehabbing mother. These calls force Chiron to decide the direction the rest of his life will take.

MOONLIGHT doesn’t rely on a linear plot to make its points about growing up as an outcast in the black ghetto. Eventually, the protagonist copes by trying to become the toughest dude on his block in the Miami ghetto. Despite this tough exterior, a pall of loneliness pervades his life, and some of the movie’s most poignant, universal scenes are those that evoke his sense of loneliness.

From a Christian perspective, however, MOONLIGHT provides some challenges. The movie has some foul language and crude slang about sex and also anti-homosexual slurs from bullies in the movie’s portrayal of Chiron’s teenage years. There’s also a dream sequence where the protagonist hears moaning and comes across another teenage friend of his sodomizing a girl. Then, when the two teenage males cross the line from friendship into sexual contact, they are shown passionately kissing for about a minute, and it’s implied one boy manually stimulates the other, with no other sex implied in the movie and nothing actually seen in that regard either.

MOONLIGHT’s director, Barry Jenkins, is trying to portray Chiron without judgment. Even so, he inadvertently shows some of the factors that can lead to homosexual behavior. Thus, Chiron has no father, so he turns to a questionable figure, the drug dealer, as his substitute role model. Also, his mother’s drug addiction is clearly a destructive habit that ruins their relationship in his childhood. On the positive side, the movie does feature a powerful scene of reconciliation and forgiveness between Chiron and his mother when she becomes sober in his adult years.

MOONLIGHT is not a strident movie promoting a homosexual lifestyle, but it is essentially a homosexual, feminist attack on traditional notions of masculinity. In that sense, it ultimately promotes a Romantic, radical liberal and perhaps even Marxist view of society, including issues of race, sex and class. Thus, MOONLIGHT may actually be more dangerous and more insidious than a really strident political movie about these issues. That’s because more strident movies can be easier to refute.