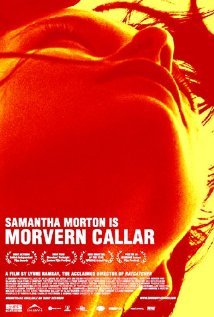 In the Scottish movie MORVERN CALLAR, Samantha Morton plays the title character, a 21-year-old grocery clerk who discovers her boyfriend has committed suicide on Christmas Eve. A note on his computer gives Morvern all of his money in the bank and instructs her to send his finished out to various publishers. Morvern sends out the finished manuscript under her own name and uses part of the money to pay for a trip to sunny Spain for her and her friend at work, Lanna. Before they leave, Morvern cuts up her boyfriend’s body and buries it in the Scottish highlands. In Spain, Morvern seems vacantly cut off from both Lanna and the world. She explores Spain on her own, then returns to Scotland to collect 100,000 pounds from a publisher buying the novel.

MORVERN CALLAR the movie is just as vacant, boring and aimless as its protagonist. It is an empty vessel that shows no real, lasting passion for anything but its own artistic pretensions. Containing strong foul language, gruesome scenes and strong sexual immorality, MORVERN CALLAR’s abhorrence lies more in its insipid worldview, insipid protagonist and insipid aesthetics than anything else.

(HH, C, So, Pa, LL, VV, SS, NNN, A, DD, MM) Humanist worldview; some Christian symbols in the background of some scenes when protagonist visits Christian communities in Spain and implied socialist elements about the allegedly drab lifestyle of the working class as well as Hindu taxi driver in one short sequence; 22 “f” words, two light obscenities, zero profanities, and woman says she has to urinate; some lightly gruesome scenes with body of suicide victim shown with slashed wrists, implied cutting up of body with some blood spatters, blood on kitchen floor; depicted fornication, implied menage-a-trois and women take bath together (but no homosexual activity); rear male and female nudity in several scenes and brief full male nudity; alcohol use; smoking and implied drug use; and, lying, fraud and protagonist has little or no moral conscience.

Webster’s Dictionary defines insipid as “devoid of qualities that make for spirit or character.” That is an excellent description of the empty-headed female protagonist in MORVERN CALLAR, a movie from Scotland made with government money. In fact, it’s a great description of practically the whole movie itself.

Samantha Morton of MINORITY REPORT plays the title character, a 21-year-old grocery clerk who discovers her boyfriend has committed suicide on Christmas Eve. The boyfriend’s death gives Morvern a new lease on life. The boyfriend left a note on his computer giving her all of his money in the bank and instructing her to send his novel out to various publishers. He also leaves her a taped collection of music to help her remember him.

Morvern sends out the finished manuscript under her own name and uses part of the money to pay for a trip to sunny Spain for both her and her friend at work, Lanna. Before they leave, Morvern cuts up her boyfriend’s body and buries it in the Scottish highlands.

In Spain, Morvern seems vacantly cut off from both Lanna and the world. After both she and Lanna have one night stands with two young men, the two women separate. Morvern explores the wilds of Spain for a little bit, then ends back in another hotel. At the hotel, two representatives from a publishing company visit her and offer her 100,000 pounds for the novel she didn’t really write. The snobbish publishing people turn out to be as vacant as Morvern, who returns to Scotland to claim her money.

Samantha Morton plays Morvern as an island all unto herself. The woman clearly does not feel bound by society’s rules, but she also seems thoroughly cut off from any meaningful contact with other people. In fact, several scenes show that her character is more fascinated by the ugly underbelly of nature, represented by worms and bugs crawling amid vegetation, mud, dirt, grocery produce, and streams.

Secular critics have naturally responded favorably to the humanist worldview that seems the focus of this movie, which is based on a 1995 novel by Alan Warner. Although there are scenes in the movie where Morvern is surrounded by Christian symbols, such as crosses and statues of Jesus Christ, neither Morvern, director Lynne Ramsay or the critics take any particular notice of them. They’re just part of the landscape, especially when Morvern goes to Spain. Furthermore, even though the humanist worldview of the movie implies that Morvern is trying to escape from her drab working class existence, nothing much more is made of this socialist conceit.

Thus, MORVERN CALLAR the movie is just as vacant, boring and aimless as its protagonist. It is an empty vessel that shows no real, lasting passion for anything but its own artistic pretensions.

Ironically, the only passion that appears to occupy the movie is its satirical view of the publishing people who visit Morvern to buy the rights to her novel. The movie shows that these people are clueless. The same might be said, however, of the snobbish, brainless attitude that those who write books and make movies like MORVERN CALLAR – and the people who wax so eloquently about such phony “masterpieces” – represent. These kinds of art works are meant to be appreciated only by an elite few, a secret, avant-garde cabal of Gnostics who enjoy lording it over the rest of humanity. No one of any real taste (or any real common sense, for that matter) would ever want to sit through something resembling MORVERN CALLAR. That’s why self-indulgent movies like MORVERN CALLAR make almost no money, and seldom survive, but movies like THE LORD OF THE RINGS trilogy make lots of money and are beloved by millions.