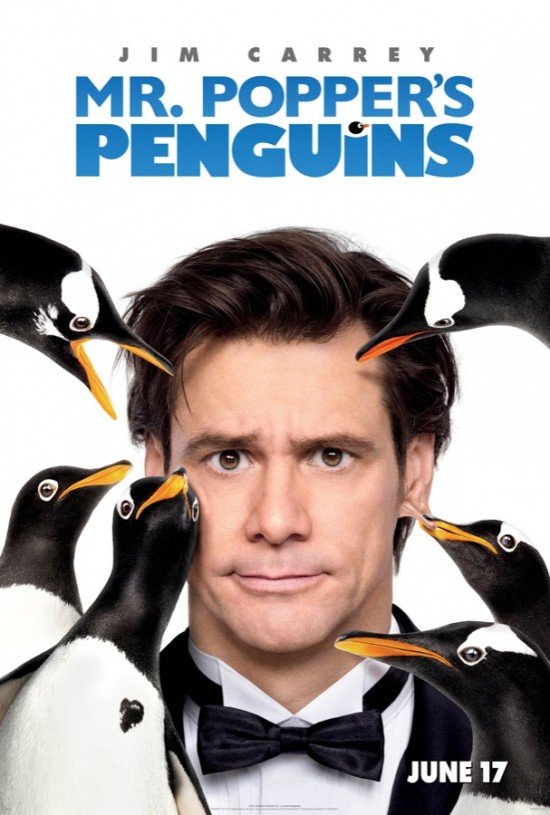 MR. POPPER’S PENGUINS stars Jim Carrey in a modern re-telling of the classic children’s book. Here, Mr. Popper is a real estate salesman in New York City who inherits six live penguins from his explorer father, with whom Popper hasn’t spoken in years. His estranged wife, Amanda, and two children, Janie and Billy, are fed up with his self-serving salesman ways. So, when Billy thinks the penguins are a birthday present, Popper can’t give them up to the villainous zookeeper wanting to take them. What starts out as an unfortunate incident turns into a life-changing experience for Popper. He starts to love the penguins and his family, but now has to stand against the malicious forces of government trying to seize his property.

MR. POPPER’S PENGUINS is not so much a family movie as a movie about a man who becomes a family man. As such, the movie is laugh-out-loud hilarious, with a clever plot. This is Jim Carrey’s best piece of work in a while. Regrettably, there’s some bathroom humor and exclamatory profanities, so caution is advised. Even so, MR. POPPER’S PENGUINS is one of the year’s best movies.

(BBB, PPP, PC, LL, V, S, A, M) Very strong moral worldview of learning to become a good father marred by some foul language and scatological jokes but extremely patriotic, anti-government, libertarian elements with a lot of exclamations to God and one prayer, but one politically correct comment about “gender”; four obscenities and nine light exclamatory profanities, plus bathroom jokes, including many penguin feces jokes; pratfalls, penguins slide down stairs and knock over and hit people, villain ties penguins up and hits them, son kicks soccer ball into villain’s groin, daughter kicks soccer ball into villain’s head; no sex scenes but some low-key sexual innuendo and natural kissing between a married couple; no nudity; alcohol use; no smoking; and, protagonist learns to grow up and stop being selfish.

MR. POPPER’S PENGUINS diverges from the popular classic book in many ways, but even so it is a very funny movie about an egocentric man who has to learn how to be a good father. This is not so much a family movie as a movie about a man who learns “how” to love his family.

The story opens with young Tommy Popper in 1976 on his tiptoes talking to his father through a ham radio. His father, nicknamed Bald Eagle, is an explorer. Every conversation is about his father going to New Guinea, Antarctica, or someplace else. Eventually, the messages stop coming.

Cut to present day. Jim Carrey is a top real estate salesman at the top firm in New York City. He passes by a classic building and goes in to convince the owner to sell the building. When he sees a picture of the owner sailing, he gives him the most incredible vision of selling the building and traveling around the world. With help from sound effects by Popper’s own secretary, the owner sells.

The partners in the firm, however, still will not make Popper into a partner, unless he does the impossible, which is to get Mrs. Van Gundy, played by Angela Lansbury, to sell the Tavern on the Green Restaurant, which has been in her family for generations. No one has been able to get her to do that. Popper is the man for the job, but he has a big problem. His estranged wife, Amanda, and two children, Janie and Billy, are fed up with his egotistical, self-serving, conniving salesman ways.

Suddenly, Mr. Popper gets a call from his father’s attorney, saying his father is dead. All of his father’s possessions go to National Geographic, except for a crate that contains a penguin. This is the last thing Tommy Popper wants or needs. He finally puts the penguin in the bathroom and heads off to meet with Mrs. Van Gundy. He is late, and she doesn’t like tardiness. When he returns, the penguin has literally flooded the whole bathroom.

Popper calls all the animal control groups to get rid of the penguin, but soon he gets another box full of five more penguins. Then, his family knocks on the door for the son’s birthday party. The son assumes the penguins are his birthday present. So, when the zookeeper comes to pick up the penguins, Popper can no longer give them up.

The zookeeper is a nasty piece of work. What starts out as an unfortunate incident turns into a life-changing experience for Popper. He starts to love the penguins and his family, but now he has to stand against the malicious forces of government that want to seize his property.

MR. POPPER’S PENGUINS is very funny. It’s Jim Carrey’s best piece of work in a while. The plot is very clever. The humor is laugh-out-loud hilarious. Angela Lansbury is delightful. There is even prayer and humble thanks in the movie!

The problem is, this is not a family movie. This is a movie about a father who learns how to love his family. It could be FAMILY MAN 2 or IT’S A WONDERFUL LIFE, with the penguins as the plot device. Some of the dialogue in MR. POPPER’S PENGUINS is above the heads of children. Jim Carrey has a tendency to use exclamatory profanities, and he’s very good at scatological or bathroom humor. Because he’s so good, he’s not as offensive as some other comedians, such as Jack Black. However, there will be many people concerned about their children who will be disturbed by the content.

This is too bad, because, with a little editing, this could be an even better movie. Even so, MR. POPPER’S PENGUINS is one of the year’s best movies.