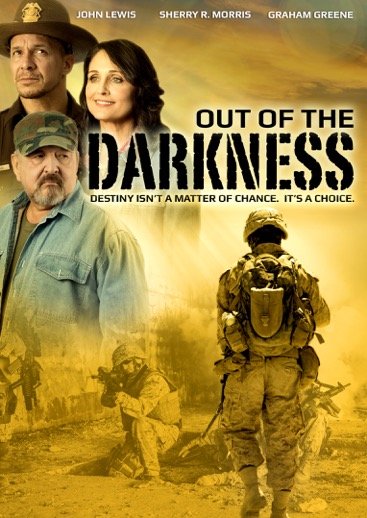 OUT OF THE DARKNESS is a faith-based drama. Eli is a troubled veteran who’s lost his childhood faith and loses his job at his father’s ranch. He gets into an argument with his girlfriend in front of their 4-year-old daughter. Angry, sullen and mad at God, Eli retreats to a bar, where he starts drinking. After a few hours, he drives his truck toward the mountains. He’s not stumbling drunk, but he’s impaired, and he runs off the road and crashes. Disoriented, Eli gets lost in the forest. As several days transpire, it becomes clear he’s engaged in a battle for his soul.

The story in OUT OF THE DARKNESS doesn’t always work or make sense and includes too many flashbacks. However, things pick up in the third act, which tells an uplifting, redemptive, dramatic story about a man regaining his Christian faith. OUT OF THE DARKNESS also has two prayers in the Name of Jesus. Caution is advised for the movie’s drunken truck crash, a brief war scene and the protagonist’s struggles with God and his inner demons in the forest.

(CCC, BB, V, AA, D, M):
Dominant Worldview and Other Worldview Content/Elements:
Very strong Christian worldview with strong moral elements includes protagonist loves his grandmother and family is promoted but protagonist’s father seems a bit harsh (no real explanation is given for this), two prayers in the name of Jesus, other references to God, protagonist struggles with God but regains his faith, and there’s a great scene where a man teaches a short Sunday school lesson with little children
Foul Language:
No foul language
Violence:
Two American soldiers fire machine guns at an unseen enemy in one scene, an inebriated man runs his truck off a road leading into some mountains and crashes into a tree in the forest, a man points a shotgun at a stranger who shows up at his tent in the forest but drops the gun when he sees the stranger is no threat, a shadowy figure appears at night in the woods, a man lost in the woods hears strange sounds, and there’s an image of some rotting meat
Sex:
No sex but man lives with his girlfriend, and they have a 4-year-old child, so they have a common law marriage, and there’s no wedding scene even after the man regains his Christian faith
Nudity:
No nudity
Alcohol Use:
Man drinks beer and whiskey in a bar and, though he’s not stumbling drunk, is inebriated when he drives his truck and crashes
Smoking and/or Drug Use and Abuse:
Man smokes during movie; and,
Miscellaneous Immorality:
Man is sullen and angry and challenges God, but the story is about how he regains his faith.

OUT OF THE DARKNESS is a drama about a troubled, sullen veteran who’s lost his childhood faith and loses his job, but is forced to face his personal and spiritual decline when he gets lost in the woods after crashing his truck. The story doesn’t always work or make sense and includes too many flashbacks, but the third act of OUT OF THE DARKNESS tells an uplifting, redemptive story about a man regaining his Christian faith in a stronger, more healthy way. Caution is advised for the movie’s drunken truck crash, a war scene and the protagonist’s struggles with God and his inner demons in the woods.

The movie opens with an unnecessary scene in a war zone where an American soldier named Eli and a brother in arms are engaged in a firefight with the enemy. Cut suddenly to Eli back home, where he’s finishing cleaning a horse stall on the family ranch where he works. His father asks to talk with him and fires him, inexplicably, for failing to do his job. Eli goes home and immediately gets into a fight with his girlfriend, Ganene, in front of their daughter, Hannah.

Angry, sullen and mad at God, Eli goes to a bar to drink. Two dissolves show Eli hanging around the bar drinking, and a flashback reveals that Eli’s anger at God goes back to the day his beloved grandmother lay dying in the hospital. The movie reveals that Eli feels his grandmother is the only person who ever believed in him. It’s also revealed that she thought God had great plans ahead for her grandson.

Eli decides to leave the bar and drive into the mountains. He’s not stumbling drunk, but he is impaired, and he runs off the road and crashes his truck. Disoriented, Eli gets lost in the forest. He also seems to be demonically attacked by a shadowy figure and strange noises. Days transpire, and Eli still is lost in the woods. It becomes clear that he’s engaged in a battle for his soul.

The story in OUT OF THE DARKNESS doesn’t always work or make sense. For example, the first scene where Eli and his fellow soldier briefly engage in a firefight with an unseen enemy isn’t resolved. It just cuts to Eli working on the ranch. Also, after showing Eli finishing cleaning up a horse stall, the movie shows Eli’s father berating him for not doing his job, but we just saw Eli doing his job! The movie also contains too many flashbacks. For example, there’s a flashback scene with Eli talking with his grandmother on her deathbed in the hospital, a scene with Eli as a child with his father attending a professional wrestling match featuring his Eli’s favorite wrestler, and a scene where Eli first met his girlfriend.

The movie picks up a bit, however, when a park ranger shows up one night and gives Eli a map to get out of the forest, then suddenly disappears. Eli then meets a Christian man named Gabe in the forest. Gabe takes Eli into his tent. He gives Eli shelter and some food. [SPOILERS FOLLOW] They talk for a while about Eli’s predicament and about Eli’s family, but Eli is reluctant to share. When Gabe asks Eli about God, Eli turns away, but then admits, “God hasn’t been a part of my life for a long time. So, I figure, why involve him now?” Gabe laughs then offers to pray for Eli, and Eli accepts.

Thus, ultimately, OUT OF THE DARKNESS tells a story about a man struggling with himself, with other people and with God. The title itself reveals, of course, that Eli will regain his Christian faith and resolve the issues holding him back from seeing God’s grace in his life and from fulfilling his potential as God’s servant. In fact, the movie suggests that Eli has to do more than just accept his late grandmother’s belief that God has great plans for his life. He must take up that cross and let God show him the way forward.

MOVIEGUIDE® advises caution for older children for OUT OF THE DARKNESS because of Eli’s drinking and smoking, the firefight in the beginning, the scene of an inebriated Eli driving and crashing his truck, the scary scenes in the woods, and an image of a rotting carcass. However, OUT OF THE DARKNESS also has two prayers in the Name of Jesus, positive references to God and a great scene where a redeemed Eli teaches a short Sunday School lesson to some really cute little children.