"Intriguing and Compelling, but Marred" 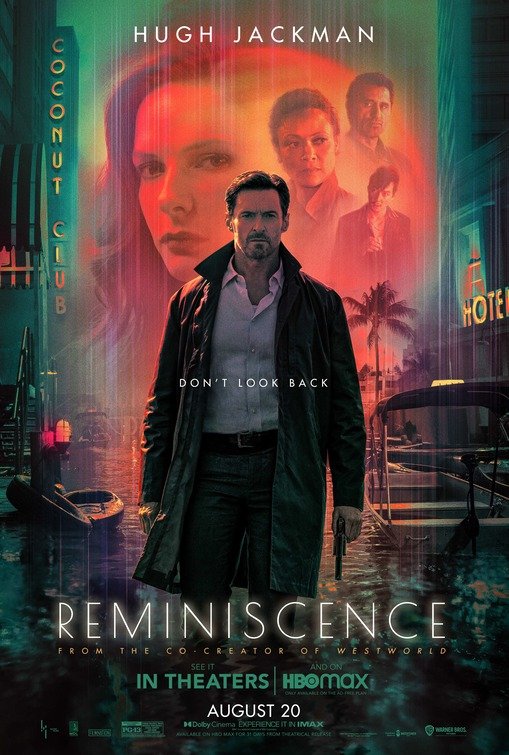 REMINISCENCE is a science fiction mystery thriller starring Hugh Jackman. Nick Banister works in Miami, Florida, where he and his assistant help people relive their best memories in a psychological exercise called the Reminiscence. One day, a woman named Mae comes to Nick’s office looking for help to find her keys. Later, Mae and Nick develop a steamy romantic relationship. Everything’s just fine until Mae disappears.

REMINISCENCE is smartly made, with a fine script having some good twists and turns, followed by a satisfying resolution. The direction by Writer Lisa Joy and performances by Hugh Jackman, Rebecca Ferguson, Thandie Newton, and others are also good. Happily, REMINISCENCE has some moral, redemptive, biblical, and patriotic content. It promotes truth, friendship, self-sacrifice, and military service. Also, characters discuss sin, the Great Flood and impending judgment. This positive content is marred, however, by some Romantic, humanist elements where characters choose their own ways of life to quench their desires for happiness. REMINISCENCE also contains lots of foul language, a steamy love scene, adulterous behavior, and some substance abuse. So, MOVIEGUIDE® advises extreme caution for teenagers and adults.

(PaPa, RoRo, HH, BB, C, Ab, Acap, Ho, Pa, Ev, P, LLL, VV, SS, N, AA, DD, MM):
Dominant Worldview and Other Worldview Content/Elements:
Strong mixed pagan worldview where characters take circumstances into their own hands using memories to learn about the present and live in an idealized state in doing so, mitigated by some strong moral elements in the movie, which includes the value of friendship, and by minor Christian elements such as self-sacrifice and characters reference sin, walking on water, the Flood, and impending judgment, an anti-biblical comment where someone says the truth won’t set you free, some anti-capitalist sentiments where the rich are corrupt, one quick shot of a homosexual couple, a reference to a pagan Greek myth story, and a villain adopts an pro-evolution attitude when he says life is all about survival, plus one patriotic moment where a character’s military service saves his life
Foul Language:
About 28 obscenities and five profanities (including two or three GD profanities)
Violence:
Strong violence includes a man stabs a woman in the gut leading to her death, another woman jumps off a high floor to her death, but only the jump gets shown, drowning, men light another man on fire, man stabs a needle into someone’s eye off-screen, but the viewer knows what’s happening, a man stabs a needle into someone’s neck, and several fighting scenes
Sex:
An unmarried couple has a strong, steamy fornication scene early on in the movie, an adulterous kiss and implied adulterous sex, man crudely mentions he’s getting aroused, and a mention of prostitution
Nudity:
No explicit sexual nudity shown, but there’s upper male nudity in multiple scenes, a man appears in his underwear, a woman’s bare back shown, and there’s implied full nudity
Alcohol Use:
Several scenes in various bars and one nightclub, plus supporting character relies on alcohol to cope with her pain, but she acknowledges her reliance on it
Smoking and/or Drug Use and Abuse:
Cigarette smoking in a few scenes, plus a character sells an addictive edible drug and mentions she’s an addict after someone made her have some; and,
Miscellaneous Immorality:
Strong miscellaneous immorality includes lying, corruption, a murder plot, name-calling.

REMINISCENCE stars Hugh Jackman and Rebecca Ferguson in a science fiction mystery thriller about a man who helps people relive their best memories, but who falls in love with a beautiful patient and goes searching for her when she suddenly disappears. REMINISCENCE is smartly made, with a fine script having some good twists and turns, but the movie’s moral, redemptive features and biblical references are marred by some Romantic, humanist elements, lots of foul language and some steamy love scenes.

The story begins with a voiceover narration by Nick Bannister about the value of time and people’s relationship to time. Simultaneously, the camera pans from a wide shot of a Venice-like landscape (which viewers later learn is Miami, Fla.) into Nick, who’s walking the streets, which have puddles of water everywhere. Nick enters his workplace where his assistant and friend preps their next client for his Reminiscence.

The Reminiscence service requires interested persons to get into a sensory deprivation tank where they lie down while immersed in water. Prior to getting into the tank, Nick administers a shot into the person’s neck that puts them into a trance-like state. Lastly, Nick puts on a head apparatus that tracks their brain function. Once the person is secure in the tank, Nick narrates a memory journey for the person where they can relive positive memories. According to Nick, the Reminiscence started out as an interrogation tool during a war called the War of the Borders, but now it’s used on a public-basis to anyone who can afford it.

One day, a woman named Mae comes into Nick’s place of work, stating she needs a session so she can recall where she left her keys. Nick, taken by her beauty, agrees. However, even after Mae’s session, Nick is consumed with wanting to know more about Mae. He soon ventures to her place of work, and, eventually, Mae and Nick begin a romance. One day, however, Mae seems to disappear out of thin air.

Occasionally, Nick and his assistant help with the local District Attorney’s criminal investigations, for extra money. While doing so one day, Nick finds Mae in the memory of a criminal, who’s tied up with hefty allegations involving a wealthy man named Walter Sylvan. Nick’s love for Mae consumes him. So, he starts hunting for her using both present day facts and the memories of others.

Will Nick’s search for Mae ultimately fulfill him?

REMINISCENCE plays like a mystery, a science fiction movie and a romance. It also has some film noir elements. All these story formulas fit the movie’s leading man, Hugh Jackman, to a “T.” Rebecca Ferguson, who plays Mae and Jackman have shared the big screen before, in THE GREATEST SHOWMAN, but this movie is certainly a genre departure from that happy-go-lucky musical. Thandie Newton also has a compelling character arc that she performs well. REMINISCENE uses voice over narration to bridge the audience’s understanding of on-screen action, but it’s not annoying way. In a way, it fits the movie’s mystery, film noir story elements. The movie also has a great script by Director Lisa Joy (WESTWORLD), with plenty of twists and turns that come to a satisfying resolution. The cinematography and editing are also excellent, so kudos definitely should go to Writer/Director Lisa Joy.

That said, REMINISCENCE has a mixed worldview. For example, it has strong Romantic, humanist elements where characters take circumstances into their own hands using memories to learn about the present and who live in an idealized state in doing so. These Non-Christian features are mitigated by some strong moral elements. For example, the movie promotes seeking truth and friendship. In addition, it contains some positive Christian, redemptive content. Thus, the movie promotes self-sacrifice, and characters discuss sin, the Great Flood and impending judgment. In addition to the movie’s moral, redemptive content, there’s a patriotic moment where a character’s military service saves his life. There is an anti-biblical comment, however, where someone says the truth won’t set you free, plus some anti-capitalist sentiments where the rich are corrupt. Finally, there’s a quick image of a homosexual couple, a reference to a pagan Greek myth, and a villain who makes a reference to the false theory of evolution when he says that life is all about survival.

In some ways, REMINISCENCE poses great questions about what it means to have too much access to people’s memories and technology. Ultimately, the ending shows the characters choosing their own ways of life to quench their desires for happiness. However, one character says that, if a dam breaks, maybe it will wash away the sins of the people. Of course, as Christians know, Jesus Christ’s death and resurrection already does this for us. As Jesus tells the woman at the well in John 4:14, “Whoever drinks the water I give them will never thirst. Indeed, the water I give them will become in them a spring of water welling up to eternal life.”

Although not gory, REMINISCENCE has some intense violence (including action violence), a steamy fornication scene, an adulterous side character, strong foul language, and minor substance abuse issues. So, MOVIEGUIDE® advises extreme caution for teenagers and adults.