"A Movie That Sabotages Itself" 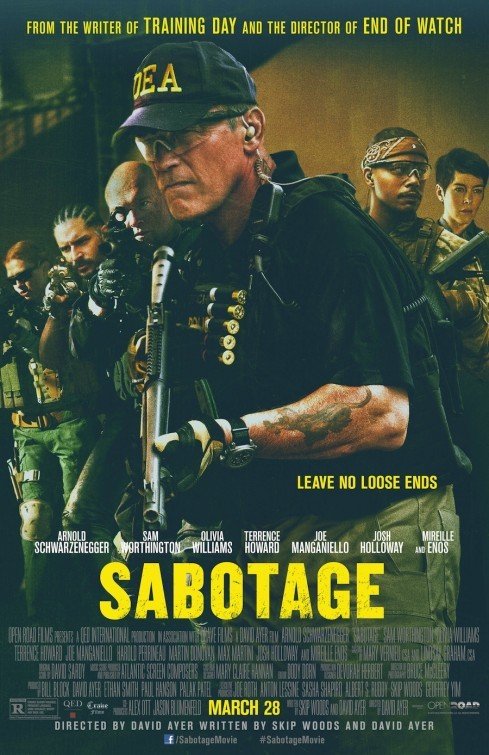 SABOTAGE stars Arnold Schwarzenegger as a legendary drug cartel buster named Breacher leading an elite team of DEA agents. The team of 10 agents breaks into a heavily armed cartel safe house. The raid turns into a planned mission by Breacher and the team to skim a little bit of the drug money without their supervisors knowing. After a successful mission, the team goes to retrieve the money, only to find out it’s missing. The DEA investigates the team, but can’t prove their guilt. So, the team’s reinstated. Then, one by one, the team members are found dead. Is it the cartel, or are the team members killing each other?

SABOTAGE is action packed and holds interest pretty much throughout the movie. Sadly, things take a terrible turn near the end, and the story becomes utterly illogical and morally desolate. SABOTAGE gives viewers nothing inspiring, but says that vengeance is sweet, even if it destroys everything you once valued. Ultimately, SABOTAGE is morally degrading and abhorrent in its worldview, with virtually constant foul language, grotesque violence, and some lewd content.

(PaPa, Ab, Ho, LLL, VVV, NN, SS, AA, DD, MMM) Strong pagan worldview that shows a team betray each other and their leader revel in self-satisfying vengeance at the end, with no redemption whatsoever, plus an Anti-Christian piece of dialogue where a character says, “It’s time to do the Lord’s work,” right before going to a strip club, plus a reference to lesbian homosexual behavior; more than over 200 obscenities (including at least 152 “f” words), seven profanities, and multiple lewd comments about feces and male anatomy; very strong, often gruesome violence includes gory shots to the head, many deaths by gunfire, video of a family being tortured is seen, a women's arm is broken and bone sticks out, multiple deformed dead bodies and body parts are seen in the most grotesque of forms, a train hits an RV with a man inside and his body is dismembered, car brutally hits a bicyclist; strong sexual content includes one brief lesbian sex scene at a party cut short, an undercover agent nearly has sex with drug lord, one implied sex scene, and strippers give men lap dances; three separate instances of upper female nudity, one naturalistic of a woman swimming, women wear revealing clothes in other instances, one at a strip club and the other during the short lesbian scene, and upper male nudity in a few instances; heavy drinking with borderline drunkenness; smoking and drug use, plus DEA agent snorts crack; and, heavy immoral content includes greed, betrayal, vengeance, stealing, recklessness, and lying.

SABOTAGE is a gritty but ultimately abhorrent and unsuccessful crime-action-drama from screenwriter/director David Ayer (END OF WATCH, TRAINING DAY).

Leading an elite team of DEA agents is the legendary drug cartel buster, Breacher, played by Arnold Schwarzenegger. The team of 10 agents breaks into a heavily armed cartel safe house. What looked to be a typical tactical raid turns into a planned mission by Breacher and his team to skim a little bit of the drug money without their supervisors knowing. He subsequently destroys all the evidence that any money was stolen.

Breacher’s team executes the plan with only one casualty right under the nose of the DEA. Considered a successful mission, the team then goes to retrieve the $10 million dollars in cash they hid, only to find out it’s missing. The team members were the only people who knew where the money was. To make things worse, the DEA finds out the money is missing, and an investigation puts Breachers team under the microscope to discover what happened to the $10 million.

Though back together, none of the team members trust each other because of the lost money. Despite that, Breacher tries to bring his old team, which was like a family to him, back together. Things go horrible wrong though when one of their team members is found dead, and it appears that someone is killing them off one by one.

Caroline Brentwood, a tough homicide detective, enters the scene and tries to figure out who’s targeting Breacher’s team. She discovers Breacher has a history with a drug cartel that kidnapped his family, tortured them, and then sent him the videotape of their captivity and murder.

SABOTAGE is action packed and holds interest pretty much throughout the movie. Sadly, things take a terrible turn near the end, and the story becomes utterly illogical and morally desolate. The decision to end the movie on a hopeless note not only leaves viewers depressed, but opens up a slew of plot holes. Unlike END OF WATCH, which ended tragically, but left viewers believing in brotherhood and friendship, SABOTAGE gives viewers nothing. In fact, it states that vengeance is sweet, even if it destroys everything you once valued. One could say that it serves as a morality tale of the dangers of greed, but if this was the case, the filmmakers fail to convey this possibility in a powerful way. Arnold Schwarzenegger brings back a raw toughness that has not been seen from him for at least 20 years, but he fails to deliver on the nuances of his character.