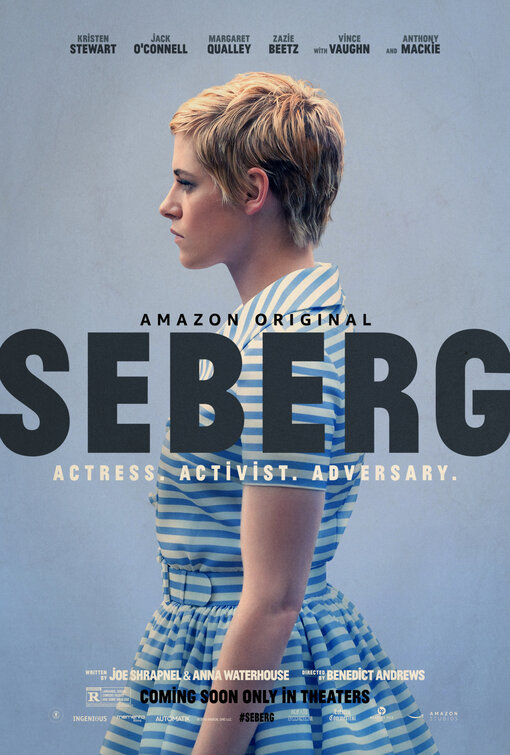 SEBERG follows the story of Jean Seberg, an American actress who worked from the late 1950s to her untimely death in 1979. It focuses on the years when she was a target of the FBI’s intel program against violent radicals. The FBI begins a surveillance program on Seberg in 1968 when she lends support to the Black Power movement and the Black Panthers. The surveillance is triggered by her adulterous affair with Hakim Jamal, a Black Power activist who’s a relative of Malcolm X, the assassinated Black Muslim cult leader. The FBI slanders Seberg to break off the affair with Jamal, then harasses her when she becomes pregnant in Mexico. The stress causes her to lose the baby and become suicidal.

Kristen Stewart does a tremendous job playing the title role in SEBERG. However, the movie is sometimes confusing and leaves out a lot of facts, like the identity of her second baby’s father, a Mexican student radical. SEBERG is also marred by a strong Romantic, politically correct worldview plagued by strong foul language, lewd behavior, adultery, nudity, some violence, and other immorality.

(RoRo, PCPC, RH, FR, B, LL, VV, SS, NN, A, DD, MM):
Dominant Worldview and Other Worldview Content/Elements:
Strong Romantic, politically correct worldview about the excesses of the FBI’s counter-intel surveillance of radical leftist groups in the 1960s and 70s, specifically its surveillance against Actress Jean Seberg, who was driven paranoid and suicidal by the FBI’s harassment, with some revisionist history that seems to whitewash Seberg’s behavior and personality and some false religion where radical black activists worship and refer to Allah in one or two scenes and a man Seberg has an affair with is a member of the Black Muslim cult, and some moral elements where Seberg shows love and affection to her son and is naturally distraught when her baby daughter dies after being two days old, and movie does expose that the FBI’s surveillance programs in 60s and 70s
Foul Language:
20 obscenities (mostly “f” words), two profanities, and a few racial slurs using the “n” word
Violence:
Light and strong violence includes use of one’s hand as a gun, real gun shown, gun was shot at a home three times, opening scene depicts Joan of Arc being burned at the stake, children hit a piñata at a birthday party, man throws and breaks plate at daughter, man breaks a lamp, man slams a door in anger, man kicks a dog and ends up killing it, man chokes another man in a fight, fight scene is depicted when Jean is filming a movie, attempted suicide by taking a whole bottle of pills
Sex:
A graphic sexual cartoon used to slander two people is depicted, married couple makes out and leads to implied sex, sex depicted under the covers, wife cheats on her husband and makes out with a male character, other references to adultery, married couple kisses, and husband kisses his wife’s hand
Nudity:
Two instances of upper female nudity with a woman’s bare chest showing, one instance where a woman’s bear back was showing, woman shown in bra and underwear twice, and upper male nudity, one of which was a man taking a shower
Alcohol Use:
Alcohol use
Smoking and/or Drug Use and Abuse:
Smoking, one instance of smoking marijuana, and two instances of prescription pill popping by woman who becomes suicidal; and,
Miscellaneous Immorality:
Man and woman shown cheating on their respective spouses, woman offers to pay man for sex, FBI breaks into woman’s house and bugs it, FBI constantly watches woman, a dysfunctional family is portrayed, FBI breaks into a hotel room to search it, and husband yells at wife out of anger, but later apologizes and explains.

SEBERG follows the story of Jean Seberg, an American actress who worked from the late 1950s to the late 1970s and focuses on the years when she was a target of the FBI’s intel program against leftist radicals because of Seberg’s support for the violent Black Power movement and the ultra-violent Black Panthers. SEBERG is sometimes confusing and has a Romantic, politically correct worldview plagued by strong foul language, lewd behavior, nudity, miscellaneous immorality, and some apparent revisionist history.

The movie opens with a metaphor depicting Jean Seberg as a martyr. It starts with the scene from her 1957 movie SAINT JOAN, where her character, Joan of Arc is burned at the stake for being a witch. Cut to 1968. Seberg is in Paris with her husband, Romain Gary, and their son. She’s about to head back to Los Angeles to continue her acting career.

On the plane back to America, she has a run in Hakim Jamal, a member of the Malcolm X wing of the Black Muslim cult and a Black Power activist, who’s complaining about first class seats. When the plane is being de-boarded, she follows Jamal where he’s posing with other members of the party doing the Black Power sign, and Seberg joins in too.

Detective Jack Soloman of the FBI is put on the case immediately when Seberg lands at the airport. From there, Jack and his partner, Carl Kowalski, are watching and listening to her every move.

After posing together at the airport, a relationship forms between Seberg and Jamal. The two become romantically involved. This eventually backfires on them because they’re both cheating on their spouses.

The FBI continues to watch the two of them and even breaks into Seberg’s house to bug it, so they’re able to listen to her phone conversations. The FBI finds out Seberg is also involved with the radical Black Panther Party, and she becomes a main target of the FBI’s surveillance of the Black Panthers and the Black Power movement.

When the FBI catches wind of Seberg and Jamal’s affair, they anonymously call Jamal’s wife to tip her off about it. When they don’t see the affair ending, the FBI releases a graphic cartoon of Seberg and Jamal, which leads to Jamal ending his involvement with her.

Seberg becomes distraught when the affair ends, but continues to travel to make movies. When she’s in Mexico filming, she becomes pregnant. The FBI finds out because of their wiretapping. When she starts to show, they spread a false media report that she’s having a Black Panther leader’s baby.

Jean knows the man isn’t the father of her baby. However, the stress of the media publicity causes Jean to begin taking medication. This leads to the baby’s premature birth. Jean loses her daughter two days after the birth and blames the media for it.

Shortly after her baby’s death, Jean tries to commit suicide by taking a whole bottle of prescription medication. Her attempt fails, and she’s thrown back into her everyday life. Jean is seen having mental breakdowns as she believes the government is watching and listening to her but has no solid proof.

When Jack, the lead FBI agent handling Jean’s case, hears of the attempted suicides and the breakdowns Jean is having, he heads to the FBI’s Los Angeles headquarters to try and make sense of it. When he can’t, he gathers her file. He intends to go to Paris to meet Jean unannounced, but will he come clean and show her everything the FBI has on her?

SEBERG tells the story of actress Jean Seberg and her connection to the Black Power movement, including the Black Panther Party. She was the main target of the FBI’s COINTELPRO program, a counter-intel program against leftist radicals that tracked, watched and listened Jean’s every move. Coupled with her baby’s death, the surveillance leads to Jean becoming mentally unstable and eventually committing suicide.

Kristen Stewart does a tremendous job playing the title role in SEBERG. However, the movie is sometimes confusing and leaves out a lot of facts, like the real father of Seberg’s second baby, her other affairs, and a true explanation of the radical leftist, racist agenda of the Black Power movement. SEBERG has a strong Romantic, politically correct worldview plagued by strong foul language, unnecessary nudity, some violence, adultery, and other immorality. There’s very little positive content in SEBERG to commend it.

Although the FBI clearly went overboard and harassed and slandered Jean Seberg, the movie seems to whitewash the character of Jean Seberg to support the movie’s view of Seberg as a big political martyr. That said, it should be noted that her second husband said after her death that Seberg tried to commit suicide on every anniversary of her baby’s death.