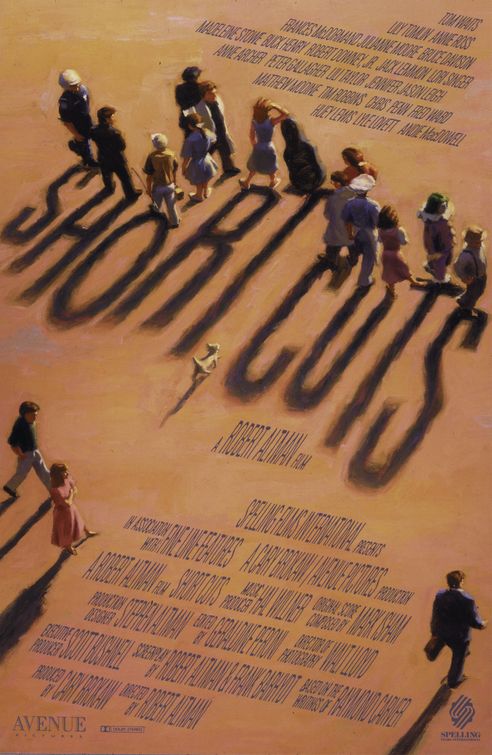 SHORT CUTS is a three-hour slice of unpleasant life in L.A. from veteran director Robert Altman. While performances by a huge cast are excellent, this is a relentless display of dysfunctional relationships, immorality, deceit, pain, and death.

SHORT CUTS is a three-hour slice of unpleasant life in L.A. from veteran director Robert Altman, who also directed THE PLAYER. In SHORT CUTS, dozens of speaking roles have replaced THE PLAYER’S cameos, and satire has given way to some dreary meanderings through a virtual caseload of L.A.’s most dysfunctional relationships. For example, Sherri tries to keep her dog out of a malathion spray while her husband, a deceitful cop, takes off for a night with his girlfriend. The girlfriend’s ex-husband is one of the malathion sprayers and will eventually end up trashing his ex-wife’s house. The relationships of several other couples are explored as well; each relationship has infidelity and is dysfunctional.

Taking inspiration from Raymond Carver’s stories of the down and out, Altman has dished out a relentless stream of pain, deceit, loss, infidelity, suicide, and murder. His great skill only intensifies the grinding discomfort of this material, but the effect is that of a master painter rendering a portrait of a draining abscess. Relief is transient (usually in the form of edgy humor), positive changes are uncertain, and comfort is illusory. After three hours of virtually non-stop immorality, depression and death, the film ends with a monster earthquake–seemingly a judgment from Almighty God that says “Enough is enough!”