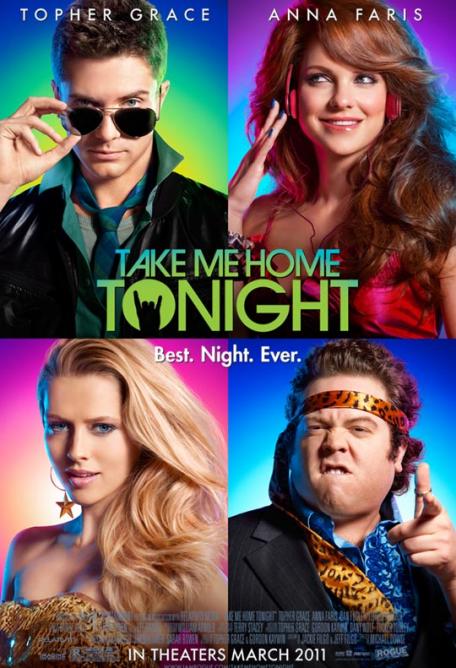 TAKE ME HOME TONIGHT follows Matt Franklin, a recent MIT graduate. Matt is unable to determine a real career path, so he works in a mall video store. His sister, Wendy, is smart and hopes to go to on to an Ivy League graduate school but is torn by her love for a dumb boyfriend, who wants to marry her. Matt runs into his high school dream girl, Tori, who acts like he never existed. He tries to impress her, and she invites him to a one-night-only mega-party hosted by Wendy's boyfriend. Despite fears of facing his more successful peers, Matt teams up with Wendy and his best friend, the hedonistic Barry. Along the way to the party, Barry steals a fancy convertible from the car dealership that just fired him for dishonesty. Now, the trio are in danger of running afoul of the law.

Rated R, TAKE ME HOME TONIGHT features some appealing lead performances, but the hedonistic friend’s lewd character is an acquired taste. Also, in the end, the protagonist escapes the consequences of his bad actions. This, and the movie’s lewd content and drug use, is unacceptable.

(RoRoRo, PaPaPa, LLL, V, SS, NN, AA, DD, MMM) Very strong Romantic worldview but with very strong pagan aspects, as the movie takes place in one night that one of the main characters feels should have anything-goes behavior; more than 50 obscenities and profanities, including 30 or so “f” words, counting words heard in rap songs on the soundtrack, and several uses of God's name in vain; light comic violence includes stealing a car and speeding, as well as later crashing the car, one male character punches another; strong sexual content where plot centers on main character's desire to finally win over and sleep with his high school dream girl, implied sex offscreen, woman seductively reveals her underwear before scene fades out, aftermath of the implied sex shows the woman in her underwear again and man with upper male nudity, hedonistic sidekick character approaches several women in an attempt to seduce them before going to a room with an older woman who takes her top off and reveals bare breasts for a few extended shots, and voyeurism; alcohol use and drunkenness; character finds cocaine in car he stole and offers some to male lead, who turns it down on ethical grounds, but the hedonist happily snorts it on at least a couple of occasions in the film and the results are played for laughs, even as he winds up in legal trouble; and, a general anything-goes attitude includes stealing a car from the car dealership that fired the protagonist’s hedonistic friend, the two car thieves listen to gangster rap as they drive away and comically destroy tons of cars and property with the car and a giant metal ball, and protagonist’s policeman father covers up the auto theft for his son while also praising son for other vandalism.

Topher Grace (TV’s “That’70s Show”), the star and executive producer of TAKE ME HOME TONIGHT, describes his new R-rated comedy as a “lost John Hughes film,” an attempt to make a John Hughes movie for current times. Indeed, it plays like an adult version of Hughes’ teen-movie SIXTEEN CANDLES, only with adults facing the dilemmas. The characters are entertaining, up to a point, with most of the main characters, except for the protagonist’s hedonistic sidekick, meant to be sweet rather than just lewd or immature. Regrettably, however, although TAKE ME HOME TONIGHT has some of the heart and charm of the Hughes movies, its R-rated content almost totally erases the moral boundaries that made them special.

The story follows Matt Franklin, a recent MIT graduate played by Topher Grace. Matt is utterly unable to determine a real career path for his life and works in a shopping mall video store. His sister, Wendy (Anna Faris), is also smart and hopes to go to on to Ivy League-level graduate school but is torn by her love for a dumb guy who wants to marry her.

When Matt runs into his high school dream girl Tori (Teresa Palmer), who acts like he never existed, he tries to impress her. She invites him to a one-night-only mega-party hosted by Wendy’s boyfriend, an event that serves as a de facto, post-college, high school reunion in which Matt fears facing his much more successful peers. He teams up with Wendy and his best friend, the hedonistic Barry (Dan Fogler), to go to the party. Along the way, however, Barry steals a fancy convertible from the car dealership that just fired him for dishonesty and now the trio are also in danger of running afoul of the law.

[SPOILER ALERTS] Matt gets to sleep with Tori but leaves her feeling shallow about it until he rebounds to save the day and build a romance in the end. His ultimate transformation from indecisive man-child into decisive man comes when he risks life and limb to get into a giant metal ball Wendy’s boyfriend owns and ride it down a steep hill as a challenge to prove his courage and daring. The fact this metal ball destroys lots of cars, people’s yards, and ultimately smashes into an unsuspecting family’s pool matters not to producers, who just want to see audiences laugh without regard to moral considerations. When Matt’s policeman dad arrives on the scene and not only doesn’t penalize or arrest him, he helps Matt cover up his wrongdoings.

TAKE ME HOME TONIGHT features appealing lead performances by Grace, Faris and Palmer, but Fogler is more of an acquired taste thanks to the fact that, although he shows the comic potential of a John Belushi or Chris Farley, he relies on utter immorality to get his laughs. Plenty of other laughs come from inoffensive settings or scenes, so everything is not completely horrible. Regrettably, though, the ending, where the protagonist escapes all consequences for destructive behavior, is unacceptable.