THE CAVE OF FORGOTTEN DREAMS 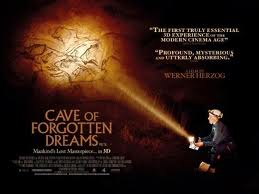 CAVE OF FORGOTTEN DREAMS opens with Gregorian chants, haunting choral singing and Director Werner Herzog’s gravelly voice suddenly breaking the silence over the picturesque French countryside, saying, “Tens of thousands of years ago. . .” Herzog, with a tiny crew of only four people, is allowed rare access into what may be the oldest cave paintings by Ancient Man, found in France. Herzog and his crew explore the paintings and other things found in the cave, including animal bones, an ancient boy’s footprint and a man’s red handprints. Herzog also ponders the meaning of the cave and the paintings, as he interviews some of the people studying the cave.

CAVE OF FORGOTTEN DREAMS is a movie with beautiful moments. The glittering, sparkling, calcite covered skulls, bones, paintings, and relics from mankind’s history are a gorgeous, unique thing to visually explore. However, it’s the blatant Non-Christian ideologies and subtexts permeating the movie, including its pro-evolutionary perspective and pagan mysticism, that media-wise viewers will find offensive. Thus, if you’re interested in the subject, CAVE OF FORGOTTEN DREAMS is worth seeing, but there are slow moments, along with the movie’s questionable worldview content.

(PaPaPa, FRFRFR, HH, EvEvEv, B, N, MM) Very strong, somewhat mixed, pagan worldview about a newly discovered cave painting, with false pagan mysticism, New Age paganism, strong humanist pro-evolutionary comments, and other Non-Christian elements combined with a positive exploration of a genuinely unique cultural artifact which also suggests mankind is not as old as the atheists and pro-evolution “scientists” think he is (though the movie skips over that obvious conclusion); no foul language; no violence; no sex; female nudity depicted in art and sculpture; and, moral relativism and some propagandistic aspects.

Documentaries are tricky things. One can never truly know until the movie ends just what the exact underlying message the movie is trying to communicate. The same is true for THE CAVE OF FORGOTTEN DREAMS, which opens with Gregorian chants, haunting choral singing and writer/director/star/producer Werner Herzog’s gravelly voice suddenly breaking the silence over the picturesque scenery of the French countryside by saying, “Tens of thousands of years ago. . .”

Herzog goes on to explain that the cave in question, the Chauvet Cave, was discovered by French cave explorers in 1993. The cave paintings are more than twice as old as any other cave ever discovered. So, the movie begins to take viewers on a journey of going with the movie crew, along with the anthropologists, scientists, art historians, geologists and the like to discover for themselves the “frozen flash of a moment in time” hidden within the cave. The ability for this cave and its contents to be so miraculously preserved after supposedly 28,000 years of time is that a sudden rock slide and collapse of a cliff sealed in the paintings, creating a time capsule of sorts.

The cave itself was not a hiding place or dwelling but rather a place for painting and perhaps rituals. There are the now extinct cave bear skulls and bones littered everywhere in the shots, some beautifully covered in glittering calcite. These cave bears made deep scratches in the cave walls, over and under the paintings along with the longest set of cave bear tracks in the world. There are various depictions of what the wildlife might have been during the cave’s useful period as there is a menagerie of bones and skeletons belonging to horses, golden eagles, ibex, and bears.

The movie’s main focues are the cave paintings and the world they depict untold years later. On the walls are horses, lions, gazelle, bison, leopards, rhinoceros, elephants, hyenas, and even a bison running in 8-legged motion. These ancient artists used the natural curve of the cave wall for movement, shading, realism, and more.

While the most famous and well-recognized is the horse panel/wall with it’s variegated shading and movement, there’s also the only known painting of a panther in this area or time period along with the incredible and much debated cave lions. Long arguments have debated what cave lions looked like and, thanks to the Chauvet Cave, it is now clear that they had no mane, and were quite large and sleek. The room of lion paintings is inaccessible in the movie due to it being located in one of the largest and the furthest cavern where CO2 fills the air from tree roots, thus poisoning the air.

Perhaps, one of the most interesting parts of the movie about the 1,300-foot long cave is an interview with one of the project’s scientists, a young male circus performer turned archeologist. Herzog asks him about the cave and the history or untold story of its unknown artists by asking, “Do they dream, do they cry at night?” The young archeologist answers by discussing the impact the paintings had on him and the constant feeling of a sort of “spiritualism” or connection to a lost past history and people. He told Herzog, “You are a human being. Every night I was dreaming of lions, real and painted lions. I’m a scientist but a human also. It affected me.”

You can see small fragments of a torch swiped, according to Herzog, 28,000 years ago by a man who was in the cave and did some paintings. He was six feet tall and had a crooked finger on his right hand, with which he did a series of red dots/handprint paintings. Suddenly in the movie there is a request for silence and then we hear heartbeats and some symphony instruments. Herzog asks the audience, “Will we be able to understand the artists through the abyss of time?”

The movie has many references to the “Stone Age.” Thos include comments that, during the time of the cave paintings, glaciers in the European Alps, thus making the sea level 300 feet lower than it is today, which means people could have walked from Paris to London. During this part in the movie, it is blatantly stated that the cave gives a sort of proof that there was not a slow evolution of man, but it was “as if modern human spirit burst onto the scene.” This part, of course, gives silent agreement to the Bible history of mankind since Adam. In fact, we now know that there are no examples of religion or art behind 30,000 years ago, at the outside.

This fact is quickly dismissed, however, as the narrator plunges blindly ahead into rationalizing a partial picture of a bison as a picture of female genitalia by saying that it’s a representation of a Paleolithic Venus, or fertility goddess. This is pure speculation by modern scientists who have bought – hook, line and sinker – the pseudo-scientific fairytales of evolution theories. This leads the movie down a rabbit trail of showing museum statues, musical instruments such as ivory flutes and supposed religious artifacts carved from mammoth tusks. The only reason the movie does this is to harp further on the fact that “much of Europe was occupied by Neanderthals” and that this is proof of “man” evolving among “ape men.”

The movie strangely turns to modern times outside the cave. In this sequence, there are explorers shown who still look for more caves while the Chauvet Cave is planning to be replicated into a theme park for tourists.

Then, Herzog introduces the whole concept of these early humans being “shamans.” At this point, one of the main scientists says he prefers to call man not “homo-sapiens” but rather “homo-spiritualists,” giving a connotation of mysticism, if not spiritualism. Also, at this point, a cave bear skull on a rock is interpreted as a sacrifice and the charcoal remnants as possible incense. The constant need and desire of the moviemakers and the scientists to read pagan ideology, practices and beliefs into the cave and the archeological evidence is overwhelming and takes away from the movie’s supposed subject of the cave.

Herzog goes on to talk with the archeologists about aboriginal rock art where an “animal” and “mystical” spirit keeps being unnecessarily connected. The statement is made that “humanness” is “a very good adaptation in the world to the landscape, the animals and to emulate or invent something.” The narrator suddenly tells us of a set of footprints of an 8-year-old boy and a wolf walking together, asking why were these not talked about? Do they fit the ideas of Creation or are they too difficult to reconcile with the pagan/mystical worldview promoted by the movie? It is mentioned by Herzog at this point that “it felt like eyes were on and among us” and how both the movie crew and the other people allowed in the cave felt like they were being watched by “unseen people and eyes.”

From the cave, the movie takes viewers a mere 20 miles away there resides one of the largest nuclear reactor and plants in Europe. Due to the needed water cooling for the nuclear reactor, a tropical biosphere has been created at a nature preserve, complete with greenhouses filled with tons of ever-populating crocodiles. The movie then focuses specifically on albino crocodiles, asking New Age-ish questions like, “Are these creatures dividing into their own doppelganger?” or “Are we like the crocodiles that look back into the abyss of time when we see the creations of the past?”

The ending OF THE CAVE OF FORGOTTEN DREAMS is confusing, abrupt and purely doctrinal. It not only takes away from the movie’s integrity, it also calls into question the hidden agendas and intentions of Herzog. He changes from talking about a beautiful lost cave and the civilization it reveals to mentioning how short man’s lifespan is compared to the grand scheme of Earth’s history, including the minimal impact that people will have when they are gone. This bit is frankly very depressing. It makes man look small and inconsequential and fosters the idea that civilization and humanity just magically appeared one day and can just as easily disappear at the whim of the world and the ever-changing climates, environments and inventions. Herzog says we are all tied together with some sort of unseen, humanist connection – connections of tradition and human behavior and history. He goes on to say that, through those connections, we are all related on levels deeper than DNA and yet we are mere mortals, whose lives will ultimately end, forgotten, with any evidence of us washed away by the never ceasing waves of time. Unless, of course, there happens to be a cave or cliff collapse that seals the fragments of our lives away until, one day, they too are discovered by future mankind. The movie ends with Herzog’s voice burned in your mind saying, “Nothing is real. Nothing is certain.”

CAVE OF FORGOTTEN DREAMS is a movie with beautiful moments. The glittering, sparkling, calcite covered skulls, bones, paintings, and relics of mankind’s history are gorgeous and unique things to visually explore. However, it’s the blatant Non-Christian ideologies and subtexts permeating the movie, including its pro-evolutionary perspective and pagan mysticism, that media-wise viewers will find offensive. Thus, if you’re interested in the subject, CAVE OF FORGOTTEN DREAMS is worth seeing, but there are slow moments, along with the movie’s questionable worldview content.