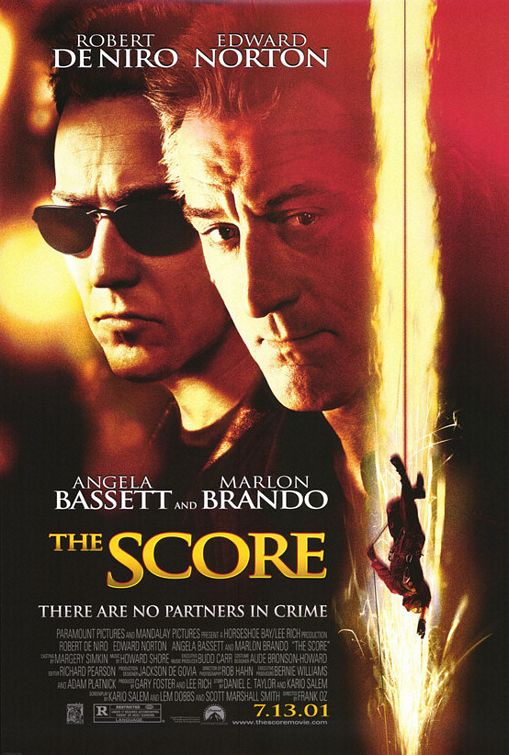 Robert DeNiro stars in THE SCORE as Nick, a safecracker from Canada who’s ready to retire and settle down with his girlfriend. Nick’s heavyset friend and partner in crime, Max, has other plans, however. Max, played by Marlon Brando, offers Nick a multi-million dollar job he can’t turn down – stealing a priceless French scepter hidden away in the basement of Montreal’s Customs House. Max persuades Nick to violate one of his most important rules – never operate in the city where you live. He teams Nick with Jack, played by Edward Norton, a cocky young thief infiltrating the Customs House by posing as a simple-minded, handicapped janitor. Personalities clash, sparks fly and secret plans emerge, but the thrill of the heist grips the three men, who won’t give up despite the risk.

THE SCORE, is a well-acted, tension-filled, character driven heist movie that gives viewers a vicarious immoral experience where they can enjoy getting away with breaking the law. Thus, the movie teaches not only that crime can pay, but also that the ends justifies the means. The movie also includes plenty of strong foul language and an implication that Nick sleeps with his girlfriend.

(PaPa, LLL, V, S, A, DD, MM) Pagan worldview shows that crime pays in captivating heist story that, nevertheless, makes viewers root for one criminal over another criminal; 72 mostly strong obscenities, 16 mostly strong profanities & one crude sexual reference; mild crime violence such as people hold guns on one another, man blows safe apart, thief puts hand over woman’s mouth when she discovers him opening a safe, police fire guns while chasing criminal, punching, & hitting man’s torso with a bat; implied fornication after crude sexual proposition; no nudity but couple wears calve-length bathrobes after off-screen sex; alcohol use; smoking & minor character smokes marijuana; and, stealing & movie teaches crime can pay & the ends justifies the means because the protagonist with whom viewers are meant to empathize most is a criminal who wants to do one last really big heist so he can retire & settle down with his long-time sexy girlfriend.

“Character driven story” is a cliché of movie criticism that can be quite tiresome; sort of like short-hand for, “I really don’t want to fully analyze all the things happening in this movie, so I’ll settle for cliché, knee-jerk phrases so that I can feel superior and people will think I know what I’m talking about, but I really don’t.” Such cliches are an occupational hazard, and can be quite embarrassing when other people take your reviews and quote them out of context. Nevertheless, sometimes cliches are really true, so what’s a person to do?

Director Frank (A MUPPET CHRISTMAS CAROL) Oz’s new movie for adult audiences, THE SCORE, is a “character driven” heist movie starring four of the most talented American actors in the last 50 years, Marlon Brando, Robert DeNiro, Angela Bassett, and Edward Norton. Regrettably, although exciting and filled with tension, it adopts the position that crime can pay, especially if you’re cautious, clever and utterly professional.

Robert DeNiro stars as Nick Wells, a safecracker living in Canada who’s ready to retire and settle down with his girlfriend, played by Angela Basset. Nick’s heavyset friend and partner in crime, Max, played by Brando, has other plans, however. He offers Nick a multi-million dollar job he can’t turn down – stealing a priceless French scepter hidden away in the basement of Montreal’s Customs House.

Max persuades Nick to violate two of his most important rules –always work alone and never operate in the city where you live. He teams Nick with Jack, played by Edward Norton, a cocky young thief who has infiltrated the Customs House by posing as a simple-minded, handicapped janitor. Personalities clash, sparks fly and secret plans emerge, but the thrill of the heist grips the three men, who won’t give up no matter what the risk.

THE SCORE effectively builds tension throughout this story. Some surprise twists end the movie on a note of emotional triumph. Furthermore, the movie builds in many humorous elements, not only in Brando’s performance, but also in the character of a computer nerd whom Nick uses to find out crucial information.

It’s the acting that seems key to everything, however. Apparently, director Frank Oz let the actors develop and embellish their roles. Though this is not always a good thing (just think of Brando’s misguided improvisations in MISSOURI BREAKS or APOCALYPSE NOW), it works almost perfectly in THE SCORE because the embellishments raise the psychological stakes when Nick, Max and Jack try to manipulate one another during the planning and execution of the heist. The fact that the improvisation works wonderfully well in THE SCORE is not only due to the actors’ efforts, but also to the efforts of the director.

It would have been much better morally, however, if THE SCORE did not ultimately teach that crime can pay. Making this immorality worse is the fact that Nick, the character with whom viewers are meant to empathize most, is a criminal who wants to do one last really big heist so he can retire and settle down with his long-time sexy girlfriend. Thus, the movie also teaches that the ends can justify the means. Of course, putting the protagonist in jail may not be the most satisfying ending to a movie like THE SCORE, but there are other ways to show that crime does not pay. For example, the movie can show the protagonist losing the stolen object in the final act, or the movie can show one of the protagonist’s friends suffering some significant hurt because of the protagonist’s illegal or immoral actions. Instead of this, THE SCORE settles for giving viewers a vicarious immoral experience where they, and the protagonist, get away with breaking the law.

THE SCORE also contains many strong obscenities and profanities and a crude sexual proposition, which is followed by a scene of an unmarried man and woman in calve-length bathrobes having some kind of breakfast. All of these things make THE SCORE a highly questionable, even though very entertaining, work. Character counts in scriptwriting, but it counts even more in life.