"Such Stuff as Dreams Are Made On" 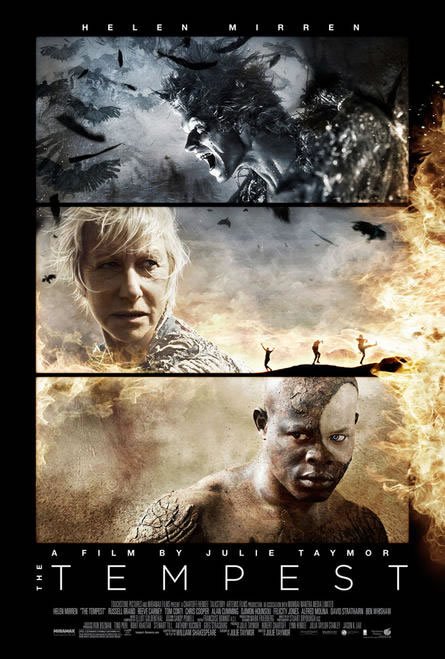 THE TEMPEST is a visually stunning production of Shakespeare’s famous play, adapted by Julie Taymor. The movie pretty much follows the play, but the protagonist, Prospero the magician and alchemist, is turned into a woman, Prospera, played by Helen Mirren. In this TEMPEST, Prospera, with help from her magical servant slash spirit, Ariel, shipwrecks the King of Naples, Alonso, on her island. Alonso banished her and her young daughter, Miranda, to the sea, which they survived because of provisions left them by the king’s kindly advisor. When Prospera finds her now teenage daughter is attracted to the king’s son, she decides to forgive Alonso while teaching him a lesson that will lead to marriage and allow everyone to return home together.

This particular production ultimately focuses on the character’s personal relationships, not the least of which is the theme of forgiveness that overtakes the movie’s second half. Thus, in the end, THE TEMPEST is one of Shakespeare’s comedies, or pastoral romances, where all’s well that ends well and Christian values gain the victory. There is some nudity and light innuendo, plus some mythical magic, so MOVIEGUIDE® suggests caution for older children.

(CC, BB, O, V, S, N, AA, M) Strong Christian, moral worldview stresses forgiveness, reconciliation and learning moral lessons, including a reference to Divine Providence, with magic and alchemy used by heroine being compared to witchcraft but heroine renounces the power, tosses her magical staff into the sea and gives up her occult books for the sake of her daughter’s future, with a couple positive references to God but also references to a talking spirit released from a tree, where it was trapped by an evil witch now dead; no foul language but comical character makes farting sounds at one point; light comical violence, two men draw swords to kill their king while he sleeps but king wakes up in time, storm ravages ship at sea, spirit transforms into large harpy to frighten and chastise three men, and three characters plot to kill protagonist but they are stopped; no sex scenes but young lovers kiss and there’s some light flowery innuendo, especially to teenager losing her virginity but mother steps in to prevent it and watch over behavior of daughter and her royal lover, who mother wants to marry her daughter so they can return home, plus comical male character plays with female clothes for laughs and comedy; rear male nudity, upper male nudity and androgynous spirit’s groin is shown but nothing explicit is shown there; alcohol use and drunkenness; no smoking or drugs; and, lying, stealing, thoughts about murder, betrayal but mostly rebuked in some way.

THE TEMPEST is a visually stunning production of Shakespeare’s famous play, adapted by Julie Taymor. The movie pretty much follows the original play, but the protagonist, Prospero the magician and alchemist, is turned from a man into a woman, Prospera, played by Helen Mirren.

Prospera, the Duchess of Milan, has been betrayed by her brother, Antonio, in cahoots with the King of Naples, Alonso. King Alonso banished Prospera and her 3-year-old daughter, Miranda, but Alonso’s kindly aide, Gonzalo, hid food and water in their boat, along with Prospera’s books containing magical lore. Prospera and Miranda become stranded on a magical island where Prospero enslaved the half-beast, half-man creature Caliban. On the island, Prospera has also freed the spirit Ariel, who was imprisoned in a tree by Caliban’s mother, whom Prospera describes as a “devil.”

Twelve years later, Prospera senses that King Alonso, Antonio and Alonso’s son, Ferdinand, are traveling on a ship nearby. The movie opens with Prospera using Ariel to conjure up a storm against the men. Miranda, however, pleads with her mother for mercy, so Prospera orders Ariel to save them and bring them to the island separately.

Prospera decides Alonso’s son would make a good husband for Miranda, apparently to earn them a chance to return to Milan and Naples with Alonso. While watching over their romance, Prospera uses Ariel to teach Alonso, Antonio and Alonso’s own duplicitous brother, Sebastian, some lessons.

Caliban may disrupt Prospera’s plans, however. He meets King Alonso’s drunken butler, Stephano, wandering on the island. Caliban mistakes Stephano for a god and asks him and the court jester, Trinculo, to help him kill Prospera.

Changing the sex of Prospero opens up a feminist reading for this TEMPEST, especially when Alonso banishes Prospera for being a witch. Conversely, however, by changing the sex, the movie undercuts the potentially politically correct anti-colonial themes that some have seen in Shakespeare’s play regarding the slave-master relationship between Caliban and Prospero.

Thus, this particular production by Julie Taymor ultimately focuses on the personal relationships between the characters, including Caliban’s angry resentment toward Prospera, Prospera’s tender concern for her daughter Miranda and Miranda’s purity, Alonso’s concern for his son’s fate, and, last but certainly not least, the theme of forgiveness that overtakes the movie’s second half. Thus, in the end, THE TEMPEST is one of Shakespeare’s comedies, or pastoral romances, where all’s well that ends well and where Christian values gain the victory.

There is some nudity and flowery innuendo in this TEMPEST, however. For example, Arial is an androgynous spirit played by a nude male, but private parts are not shown. In addition, the play’s magical themes may confuse younger viewers, even though in the end Prospera throws away her magical staff and releases Ariel from her service. So, MOVIEGUIDE® advises caution for pre-teenagers. Also, young teenagers will find the language here a little difficult, especially those who haven’t been exposed much to Shakespeare.

All in all, THE TEMPEST is a rather heady introduction to Shakespeare’s famous play. The themes, motifs and language are not as accessible as some versions of ROMEO & JULIET, HAMLET, MACBETH, AS YOU LIKE IT, or HENRY V, but this movie is as good an introduction on film to this unique play as moviegoers are ever going to get. Best of all, it’s well worth seeing at least twice, for older viewers and those interested in Shakespeare’s work.

– The Tempest, Act IV: Scene One, by William Shakespeare.