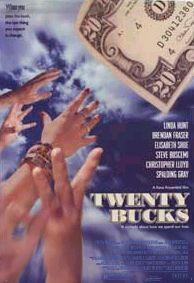 TWENTY BUCKS tracks a single piece of folding currency through several owners in a series of crisscrossing vignettes. Unfortunately, the storytelling potential for this clever device remains unfulfilled, despite a few engaging moments. Needless foul language from two characters, and an interminable lewd striptease sequence, are pointless deficits. Overall, despite a fair amount of talent on display, most viewers of this film will walk away feeling shortchanged.

If you’ve ever wondered what happened to the last greenback you spent at your local supermarket or coffee shop, TWENTY BUCKS might sound intriguing. Its premise is simple: we follow a single twenty-dollar bill as it passes through the hands of several people over a few eventful days. For a foul-mouthed homeless woman, the bill’s main value is in its serial number, which propels a futile pursuit of a lottery jackpot. Later, the same cash is manna from heaven for a homeless family, for whom it provides needed daily bread. For a prosperous immigrant, it is a poignant memento of his first day in America; but, his prospective son-in-law thoughtlessly stuffs the same bill into the bikini bottom of a lewd stripteaser at a bachelor party. A teenage boy who receives the cash in a birthday card sees it as a way to finance some wine–to facilitate the seduction of his girlfriend.

Although the story-telling possibilities for this film are limitless, the father/son screen writers have explored them with only limited success, despite a few engaging moments. Needless foul language from two characters, and an interminable lewd striptease sequence, are pointless deficits. There is plenty of talent on display in TWENTY BUCKS, and some promising ideas drift by at times, but most viewers will come away feeling shortchanged.