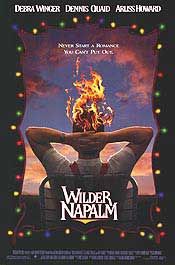 WILDER NAPALM is a quasi-comic psychic would-be thriller with pretensions of human drama. In telling the tale of two brothers with pyrokinetic powers--the ability to start fires by willing them, this film wavers erratically between stupid comedy, incendiary violence and an intense drama of martial infidelity. This lack of focus, along with locker room language, has turned an interesting premise into mush.

WILDER NAPALM is a quasi-comic psychic would-be thriller with pretensions of human drama. Wilder (Arliss Howard) and Wallace (Dennis Quaid) are brothers with a terrifying “gift”–they can mentally direct fires to start wherever they like, with explosive ferocity. Wilder holds down the most boring job on earth; however, the tedium is offset by the devotion of his wife, Vida (Debra Winger), who displays a single-minded interest in having sex with him. Wallace travels as Biff the Clown with a two-bit circus. Both men loved Vida, but the quieter Wilder won her hand, leaving the flamboyant Wallace to nurture a literally incendiary jealousy. During a miniature golf game, Wallace and Vida finally engage in a steamy kiss–and Wallace’s heated response burns down the whole course. When Wilder discovers them on the verge of carnal knowledge, he is deeply wounded, and the stage is set for a vicious, flaming, exploding confrontation which nearly engulfs the entire town.

WILDER NAPALM wavers erratically between stupid comedy, ferocious incendiary violence, and an intense drama of (temporary) martial infidelity. This hopeless lack of focus, along with an ongoing spew of locker room language, has turned an interesting premise into molten mush. The story of Cain and Abel says more in a few verses than WILDER NAPALM accomplishes in two hours.