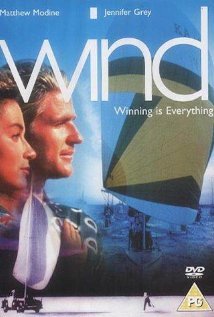 WIND promises to be a challenging epic about winning the America's Cup, but instead delivers a plodding romance filled with confused relationships and forgettable characters. WIND is an uneven film that depicts one man's egomaniacal pursuit for excellence, including his follies and triumphs. The various characters become involved in sexual relationships out of convenience rather than love and manipulate each other to get what they want.

(L, N, SS, V) Approximately 8 profanities; brief shot of upper female nudity; promiscuity; and, a scene showing man putting gun to his and his friends' head as he bluff suicide and murder.

As images of America’s Cup races greet the eye, Sam, an old yachtsman, reminisces. His grandson Will Parker (Matthew Modine) dreams about crewing on the Endeavor, the newest entry into the America’s Cup. Will and Kate Bass train for the race. Kate, a graduate student, devotes herself to helping Will. Morgan Well (Cliff Robertson), the skipper of the Endeavor, picks Will for the crew, but bans Kate, so she packs her bags. Suddenly, the adventure of racing becomes the focal point of the story. Will’s error causes the Americans to lose the race. Will raises money to build a new boat by seducing Morgan’s daughter. Kate and her new boyfriend help design the vessel. After an eternity, Will wins back Kate and the America’s Cup.

WIND is a plodding romance filled with confused relationships and forgettable characters. The poetic cinematography fails to buoy up the waterlogged script. WIND is an uneven film that depicts one man’s egomaniacal pursuit for excellence, including his follies and triumphs. The various characters become involved in sexual relationships out of convenience rather than love and manipulate each other to get what they want.