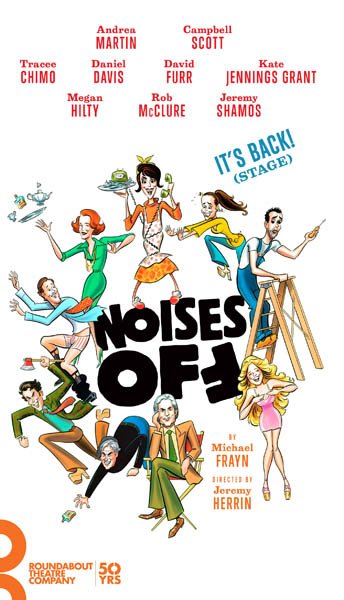 NOISES OFF is a play-within-a-play about a kooky cast of thespians who put on a "British sex farce" and take it on the road. Clashing egos, romantic interests and different agendas cause things to go haywire, resulting in comic disaster. While sophomoric types might appreciate these antics, mature audiences will not. Overall, NOISES OFF is filled with obscenity, foolish talk and coarse joking.

(LLL, V, SS, A/D, Ab) 10 obscenities & 32 profanities (29 out of 32 are exclamatory profanities); slapstick violence (man thrusts cactus up another character's rear end, whacking one another on the head, & man falls down stairs; woman in sexy undergarments (continuous); guzzling alcohol and smoking cigarettes; and, director calls himself "God" and distorts Scripture to be funny.

NOISES OFF is a play-within-a-play about a cast of thespians who take a “British sex farce” on the road. Actress Dotty Otley, a once-famous now fading star, is “in love” with co-star Garry Lejeune, though a trivial dispute causes them to throttle one another. When the cast becomes difficult to work with, high-strung director Lloyd Fellowes sighs, “now I know how God created the world in seven days. He took valium.” Lloyd is especially impatient with Brooke Ashton, a daft woman whose major asset is her figure. On-stage, Brooke portrays a mistress having an affair with a real estate agent. When he takes her to a vacant villa to fornicate, the homeowner comes home unexpectedly with his lover. Unaware of each other’s presence, the couples discover that household objects are moved or missing.

NOISES OFF continues as the “British sex farce” tours the country, and comic disaster strikes. While sophomoric types might appreciate these antics, mature audiences will not. Towards the end, one character vindictively thrusts a small cactus up another’s rear end. Overall, NOISES OFF is filled with obscenity, foolish talk and coarse joking.