PAWS OF FURY: THE LEGEND OF HANK

"What Makes a Hero?" 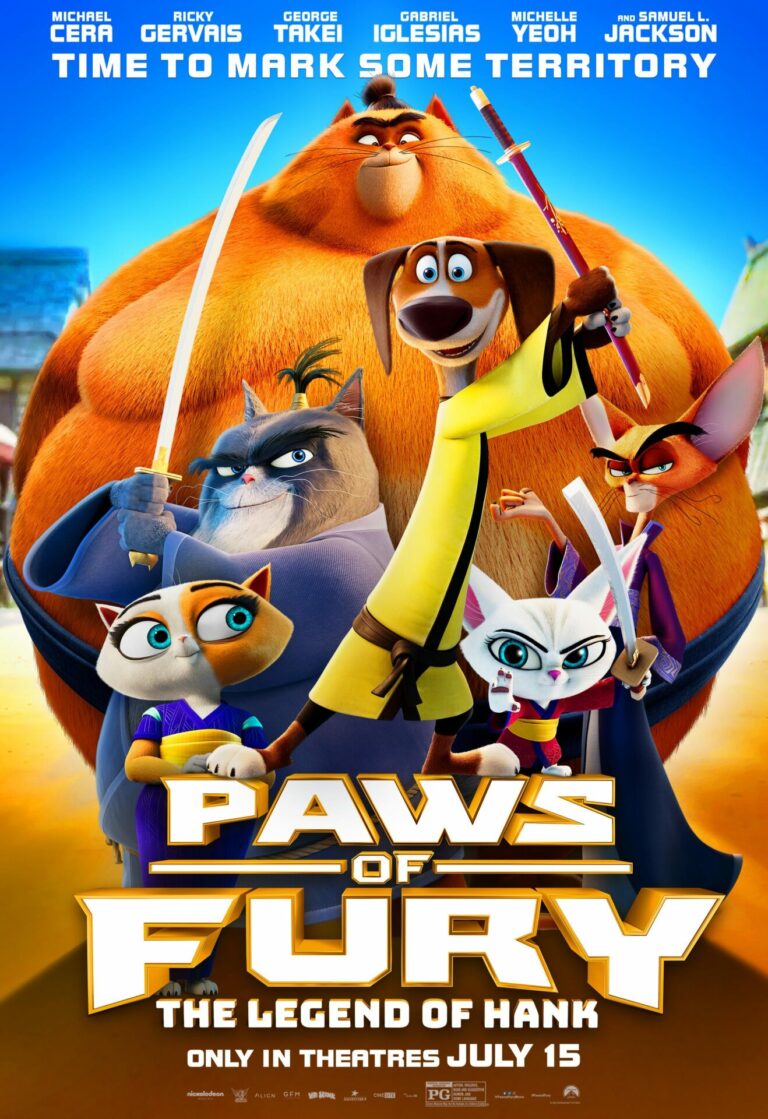 PAWS OF FURY: THE LEGEND OF HANK is an animated action comedy. A dog named Hank wants to become a samurai but the land of samurai cats don’t want him there. Instead, the evil villain, Ika Chu, appoints Hank, knowing he will be awful, to be the local town’s samurai. Ika Chu wants to take over the land by bringing in ninjas to fight Hank. With the help of a washed up, old samurai cat, Hank becomes a better samurai, but in turn, he gets a big ego. Will pride come before the fall?

PAWS OF FURY: THE LEGEND OF HANK is an entertaining, fun movie with lots of action and jeopardy. It makes many funny jokes about movie making. The voice talent includes many actors who have a flair for comedy. PAWS OF FURY has a strong moral worldview about acting in a selfless manner. The movie stresses serving others, not being prideful, not seeking money and greed, and having a humble attitude. PAWS OF FURY does have lots of jeopardy and action violence. So, MOVIEGUIDE® advises caution for younger children.

(BB, FR, L, VV, AA, M):
Dominant Worldview and Other Worldview Content/Elements:
Strong moral worldview stressing being selfless, humble, taking care of others, protecting others, plus greed is seen as a bad thing, but one character is meditating
Foul Language:
One light profanity, some scatological humor about a toilet and pooping
Violence:
Action violence with no blood includes martial arts fighting, ninjas fighting, slapping, and hitting
Sex:
No sex
Nudity:
No nudity
Alcohol Use:
One character needs to get his life together and is drinking some juice implying drunkenness but seen as bad
Smoking and/or Drug Use and Abuse:
No smoking or drugs; and,
Miscellaneous Immorality:
Evil villain is greedy and lies.

In PAWS OF FURY: THE LEGEND OF HANK, an evil villain appoints an unqualified dog named Hank to watch over a town as its samurai defender, in order to steal the town from the citizens. PAWS OF FURY: THE LEGEND OF HANK is an entertaining animated comedy with a moral worldview about acting in a selfless manner, but it does have lots of cartoon action violence, so caution is advised for younger children.

Hank was once saved by a samurai and, after that, he has always wanted to become one. So, he decides to travel to the land of samurai cats. He arrives in a village full of cats, but the cats don’t want him, because cats don’t like dogs.

Meanwhile, Ika Chu, an evil villain cat building an empire, wants to take over the small village. He decides to allow Hank to become the village’s samurai defender, knowing Hank will be a horrible samurai and thinking that he can bring in some ninjas to defeat the town and take over.

Hank thinks this is his big break. He soon meets Jimbo, a washed up, old samurai cat who’s lost his desire to help others. However, Jimbo agrees to mentor Hank and teach him the samurai ways. When Hank gets one win, and protects the town from a huge Sumo cat, he gets an ego and decides to party instead of protecting the people. Jimbo tells him pride comes before a fall and that a samurai’s duty is to protect, serve and to think of others before themselves. However, Hank still wants to party because of his win. So, Ika Chu offers him a VIP event where he will be the famous one. Hank goes all in and allows others to praise him, while Ika Chu releases an army of ninjas to take over the village.

Will the village be okay when no one is there to protect them? Will Ika Chu take over the village? Will Hank learn to be selfless?

PAWS OF FURY: THE LEGEND OF HANK is an entertaining, fun movie that makes jokes about movie making. The movie has action and jeopardy and keeps moving along. While the story isn’t terribly innovative, the whole family will enjoy it.

PAWS OF FURY: THE LEGEND OF HANK has a moral worldview about thinking of others above oneself. The movie stresses that pride goes before a fall, so don’t do things for your own glory. Being committed to helping others and being there for others is another central theme, along with greed is seen as bad. There is also a message of not judging others if they’re different than you. PAWS OF FURY has lots of cartoon action violence, so MOVIEGUIFE® advises caution for younger children.

Watch PAWS OF FURY: THE LEGEND OF HANK: