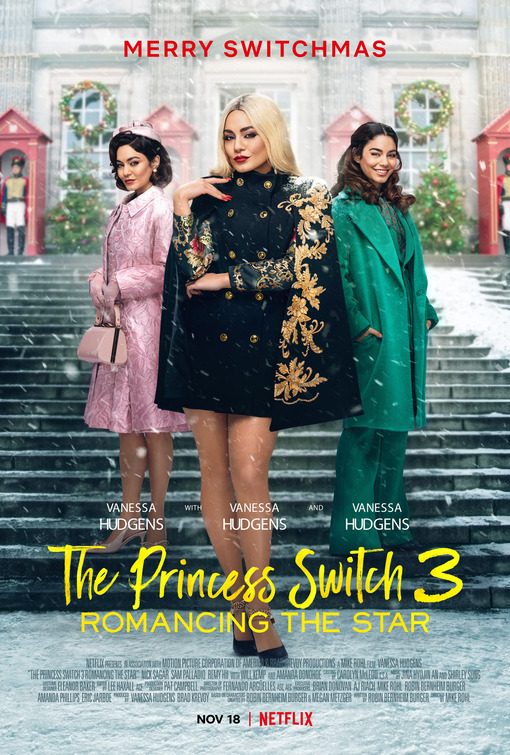 In THE PRINCESS SWITCH 3: ROMANCING THE STAR, Queen Margaret and Princess Stacy call in their mischievous cousin, Fiona, to help them find a sacred Christian relic that’s been stolen. Queen Margaret and Princess Stacy are in charge of planning an international Christmas festival. The festival’s centerpiece is the Star of Peace, an artifact on loan from the Vatican that once belonged to St. Nicholas himself. When the Star goes missing, Queen Margaret suggests her mischievous cousin, Fiona, come and help them find it. However, Princess Stacy is still worried Fiona will act poorly. Will they be able to retrieve the Star of Peace? Will the mischievous Fiona change her ways and do the right thing?

(CC, BB, FR, L, V, A, M):
Dominant Worldview and Other Worldview Content/Elements:
Strong Christian, moral worldview, Star of Peace relic given a Christmas to imply a metaphor, mentions of all God’s children, a convent and nuns are shown; Buddhist statue in the background
Foul Language:
Two light obscenities
Violence:
Light jeopardy, and someone falls from a roof
Sex:
No sexual immorality, just kissing between married couples
Nudity:
No nudity
Alcohol Use:
Light alcohol use
Smoking and/or Drug Use and Abuse:
No smoking or drugs; and,
Miscellaneous Immorality:
Lying, deceit and artifact is stolen but recovered.

In THE PRINCESS SWITCH 3: ROMANCING THE STAR, Queen Margaret and Princess Stacy call in their mischievous cousin, Fiona, after a beautiful Christian relic that belonged to St. Nicholas is stolen. Streaming on Netflix, THE PRINCESS SWITCH 3 is an entertaining, fun, enjoyable Christmas movie with a Christian, moral worldview about forgiveness, change and doing the right thing.

Queen Margaret and Princess Stacy are so excited to be putting on a wonderful international festival to celebrate Christmas. At the center of this event is a relic from the Vatican called the Star of Peace, which once belonged to Saint Nicholas. This relic is extremely meaningful and irreplaceable.

Soon after the relic is moved to the Castle, however, it’s stolen. Queen Margaret and Princess Stacy are distraught, but Queen Margaret believes the one person who can help them is her cousin, Fiona. Fiona is currently at a convent doing volunteer work hours because of the crime she has done. Princess Stacy is still upset at Fiona for kidnapping her in the previous movie and doesn’t want to work with her, but she believes that, since Fiona was a criminal, she may be able to find the stolen relic.

Fiona agrees to come and help Queen Margaret and Princess Stacy. She gets her friend on board, Peter. The only reason Peter agrees to help, however, is because he and Fiona have a past, and he is hoping to rekindle her love for him.

Will they be able to get back the Star of Peace? Will Fiona patch things up with Peter?

THE PRINCESS SWITCH 3: ROMANCING THE STAR has a strong Christian, moral worldview. The movie is centered on a Christian relic and talks about forgiveness. Fiona decides to do something because it’s the right thing to do and consequently becomes a better person.

PRINCESS SWITCH 3 is an entertaining movie. In fact, this one seems like the highest budget out of the whole Prince Switch series of movies from Netflix. The costuming is very fun, and Venessa Hudgens does a splendid job playing three different characters. THE PRINCESS SWITCH 3: ROMANCING THE STAR is a fun, redemptive movie for families. The movie does have a couple light obscenities, however.