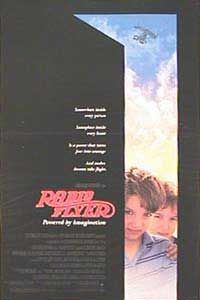 RADIO FLYER is about two brothers who come up with a plan to escape the physical abuse of their boozing step dad: building a mini airplane that enables them to fly away from their problems. As a dreamy tall tale, the movie entertains some ill-fated messages: (1) kids are smarter than their parents, (2) if you believe something strong enough, it will happen; and, (3) magical thinking is the answer to your problems. Christians need to help others understand the fallacies presented in this well-made film which may traumatize younger children.

RADIO FLYER begins with Mikey and his younger brother, Bobby, enjoying summer. The boys’ only problem is “King,” their alcoholic step father, who takes out his wrath on Bobby. Although the abuse is off-screen, Bobby is black and blue and bleeding from beatings. At the “wishing rock,” the boys wish for protection from King’s abuse. One message is clear: children must look out for themselves in order to survive. Adults cannot be depended on; they make one mistake after another. Therefore, the brothers build an airplane to fly Bobby away from physical harm. Bobby’s magical belief in flying enables him to soar off a ramp, glide through the clouds and travel all over the world.

Is his experience real, or an illusion? The movie implies that nobody can know. Of course, Christians reject this nominalistic premise. Suffering is real, and problems are not solved through magical thinking. Our hope is not in an impersonal force, but in the sovereign Lord who delivers us from evil. Most of the children in the theater where RADIO FLYER was screened were traumatized afterwards (crying and shaking). Christians need to help others understand the fallacies presented in this well-made film.