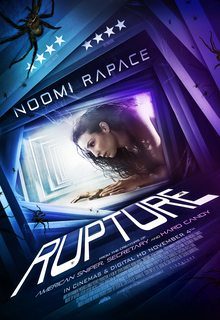 RUPTURE is a violent horror movie set in a dystopian science fiction future. A group of scientists kidnap a mother named Renee. They subject her to medical experiments designed to rupture one of her genes and turn her into a mutant with shapeshifting powers. Most of the movie focuses on Renee’s physical struggle. It shows her being tasered, hooded, handcuffed, restrained, and injected with a substance that intensifies her fear. The last quarter of the movie pivots to a science fiction analogy of totalitarianism, Nazi ideology and eugenics.

Without its strong portrayal of violence and torture, RUPTURE could have made a chilling psychological portrait of totalitarian evil and eugenics. Swedish actor Peter Stormare steals every scene, especially when he coldly reveals what the shapeshifters have planned for humanity and for the victimized heroine. The problem is that the humanist, evolutionary perspective of the evil scientists is exposed too late. Also, the violence is too disturbing for most viewers, but not explicit enough for others. Finally, RUPTURE contains plenty of foul language and some scatological moments. So, ultimately, RUPTURE is unacceptable, unsatisfying viewing.

(C, B, AC, HHH, EvEvEv, AbAb, AbAb, HH, LLL, VVV, N, D, M) Light redemptive, moral, anti-totalitarian worldview at the end, but set in a dystopian world, so most of the movie is about villains with a humanist, evolutionary, immoral worldview, who believe might makes right and that the strong have the right to kidnap, experiment on and kill the weak, though the last moments of the movie present the horror of such a perspective; 24 obscenities and three profanities, plus references/depictions to urination, including the implication that an imprisoned women must urinate into a bucket; very strong intense violence includes woman is tasered, gagged and handcuffed during kidnapping, many scenes where someone is involuntarily restrained, woman writhes and contorts her body after being injected with something, blood is shown being removed from a woman’s arm with a large needle, needles are shown but not the injections themselves, one depiction of drowning in chemicals, implied torture including drilling through a man’s eyes, a woman is stabbed in the neck with a needle, blood depicted as woman accidentally cuts herself with an exacto knife, spiders dropped on a woman’s arm and face, a snake crawls over a man’s clothed genitalia, grotesque transformations of women’s faces, a child screams in captivity, several off-scene screams, and depiction of falling from heights; no sexual content per se; mild nudity as the movie shows a woman’s upper thighs as her pants are cut off, a woman brushes another woman’s inner thigh and places her hand between her breasts, several people involuntarily nudge a woman’s skin, one man implies he will unbutton his clothes as a woman is restrained but does not, a doctor gives a gynecological examination, depiction of an ovum and human sperm under a microscope; no alcohol use; no smoking but two drug references, as woman is told she has been drugged and is later hit with sleeping gas; and, miscellaneous content includes a dysfunctional divorced family, including a father who curses at his ex-wife and has no interest in his son’s life.

RUPTURE is a violent horror movie about scientists who kidnap, torture, and try to physically mutate a woman with a rare genetic condition. She carries the gene G10-12X which, if ruptured, will turn her into one of a small number of shapeshifters who are quietly hiding among the ranks of unsuspecting earthlings.

After surveilling Renee (Noomi Rapace) and her son inside their home, a group of scientists kidnap her and subject her to medical experiments designed to rupture one of her genes. The early movie focuses exclusively on her physical struggle, showing her being tasered, hooded, handcuffed, restrained, and intravenously injected with an unspecified substance that intensifies fear. For minutes at a time, the camera focuses on her writhing, squirming and contorting herself.

The movie’s disturbing content is no surprise. Its director, producer, and co-writer, Steven Shainberg, produced SECRETARY, a 2002 movie about bondage and sadomasochism. There is a mild undercurrent of sexuality that runs through the torture. Thankfully, the violence is not as explicit as HOSTEL or SAW, but that also means it will not satisfy fans of that disturbing genre.

The last quarter of the movie pivots to a science fiction analogy of totalitarianism, Nazi ideology and eugenics. The torture is designed to psychologically terrorize the victims. The movie eventually reveals fear is the key to transforming a normal individual into a shapeshifter, just like the kidnappers. The climactic torture scene is a clear reference to George Orwell’s classic novel 1984. This bit stays with the viewer long after the movie ends, but it’s too little, too late.

Swedish actor Peter Stormare (who plays Terrence) steals every scene, especially when he cold-bloodedly reveals what the shapeshifters have planned for the human race and for Renee. The movie’s final, speechless scene (Rapace’s only good performance here) punctuates the despair and terror of the soul-crushing worldview of the humanist villains. Eventually, the movie shows the heartless evil at the heart of the evolution-uber-alles message.