"Endearing Message with Lots of Laughs" 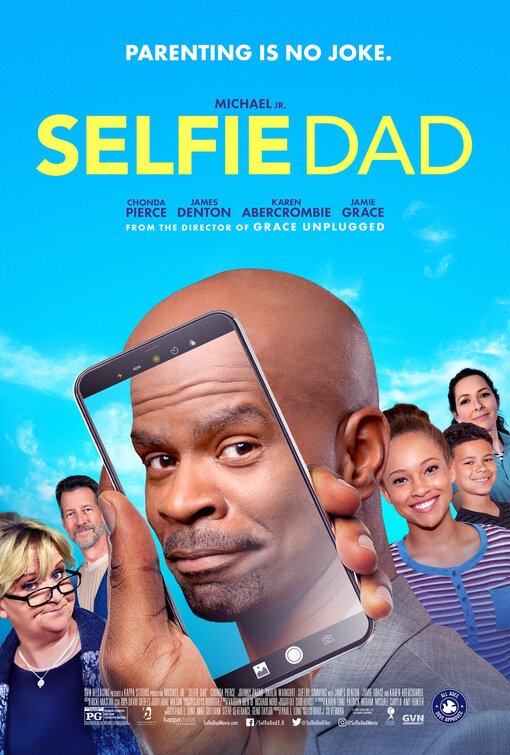 SELFIE DAD: An Endearing Message with Lots of Laughs!

A faith based movie that is full of laughter and fun? Count us in!

SELFIE DAD follows Ben Marcus, a reality television show editor trying to break into the world of YouTube. A former standup comic, Ben wants to get back to his roots of making people laugh. When Ben’s son, Jack, uploads a video to his channel, Ben goes viral. However, going viral comes with its obstacles. Ben is faced with some difficulties that remind him of his father’s immoral failures. The difficulties could ruin his family.

Despite some hilarious comedy, the story in SELFIE DAD doesn’t really take off until it introduces the villain, a woman who has her eyes on Ben and wants to interview him. Once the jeopardy is introduced, the story becomes coalesces, leading to a very powerful ending. Furthermore, SELFIE DAD has a very strong Christian, moral worldview. Reading and following the Bible is extolled. There are several mentions of Jesus and how He is the only way. Church services are depicted with worship songs. Also, prayer is a huge part of the movie. SELFIE DAD does what so few Christian movies do, which is to make us laugh.

(CCC, BBB, A, M):
Dominant Worldview and Other Worldview Content/Elements:
Very strong Christian, biblical, moral worldview with several mentions of Jesus and how He is the only way, church services are depicted with worship songs, prayer is a huge part of the movie as Ben’s wife is mentored on how to pray for her husband, prayer is also depicted several times, a discipleship relationship is shown where one man is encouraging another man to get into the word of God and how important reading the Bible is, and many moral values are highlighted, including honesty, forgiveness, family, and love
Foul Language:
No foul language
Violence:
No violence
Sex:
No sex
Nudity:
No nudity
Alcohol Use:
Social drinking at an award show after party
Smoking and/or Drug Use and Abuse:
No smoking or drugs; and,
Miscellaneous Immorality:
A dysfunctional family and husband/wife relationship depicted, but by the end all relationships are fixed because of the main character’s turn to God, and one character has a bad attitude and is very rude, but eventually comes around by the end and changes her tone.

SELFIE DAD is a hilariously funny and sometimes intensely poignant story of a father who needs to be delivered from his fears and anxieties about his dysfunctional past by faith through reading the Bible. Despite some of the funniest and heartwarming scenes, SELFIE DAD introduces the villain a little too late, but the ending is very powerful.

The movie opens in 1999 with Ben Marcus, played by Michael Jr., doing a very funny standup comedy routine. Cut to the present. Ben is an editor of Reality TV programs at a small production company, and he’s married to an Argentine wife with two wonderful children. Ben, however, is bored by his job, annoyed by the star of one of the TV programs he edits, and completely disengaged from his family. One of his co-workers, Mikey, is going to seminary and is doing his thesis on the need to read the Bible. Mikey wants to interview Ben because he thinks he’s a committed Christian. Meanwhile, Ben is haunted by the memories of his father and mother. Ben’s father was a successful comedian but turned out to be cad who had many affairs with his fans. When Ben told his mother about his father, it drove her into depression and eventual death.

Ben’s son, Jack, introduces him to YouTube comedy videos that are making some people rich and famous. At work, Ben tries to do a comedy video, but it’s terrible and doesn’t do well on his channel. When Jessie asks him to fix the toilet in the house, he films it thinking it could be useful. However, he fails to fix it so he doesn’t think the video is worth anything. Ben leaves his phone where Jack finds it and uploads it to YouTube, where it goes viral.

Meanwhile, Ben’s daughter, Hannah, is just at that stage of life where’s she’s dating and thinking about boys. At one point, they think she’s run away. This forces Ben to do what he’s never done before, which is to pray. Jessie, his wife, learns from a neighbor that she needs to pray for Ben.

Ben gets named the digital YouTube comic of the year, and a predatory female starts stalking him, reminiscent of his father’s adulterous past. Ben gets caught up in the pursuit of fame and loses his job. Eventually, he finds the Bible, but he alienates his YouTube fans by telling them how much the Bible means to him. Mikey tries to counsel Ben through all these crises.

SELFIE DAD has some of the funniest scenes in a movie. Eighty-two percent of the people go to the movies for humor, and some of the humor in SELFIE DAD is reminiscent of the Golden Age of Comedy with such people as Bob Hope, Martin and Lewis, Abbott and Costello, and other clever comical wordsmiths. Also, some of the crises are very poignant, even bringing tears to the audience.

However, the plot doesn’t really take off until it introduces the villain, who is Laurie, the woman who has her eyes on Ben and wants to interview him. Once the jeopardy is introduced, the story starts to coalesce and becomes a cohesive whole, leading to a very powerful ending.

SELFIE DAD has a very strong Christian, moral worldview. Reading and following the Bible is extolled. There are several mentions of Jesus and how He is the only way. Church services are depicted with worship songs. Also, prayer is a huge part of the movie. SELFIE DAD does what so few Christian movies do, which is to make us laugh.