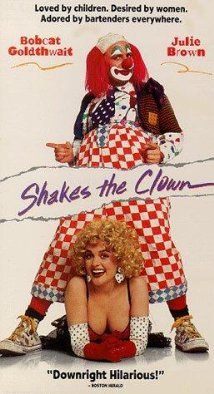 SHAKES THE CLOWN is a boozer loser who ends up being framed for murder by a rival happy face. Despite it's talented cast, this black comedy, which includes everything from blasphemy to urination, is anything but family fare.

SHAKES THE CLOWN is a boozer loser who ends up being framed for murder by a rival happy face. The story begins in Palukaville, with a large population of clowns. Performing the usual rounds of birthday parties and afternoon shows, the clown community keeps their costumes on all day long. Off-stage, however, they are depressed and aggressive, living sordid and alcoholic lifestyles. Life is dreary for Shakes, who spends his time drinking at the Twisted Balloon Bar and trying to convince his girlfriend, Judy, that he isn’t a lush. When Shakes rival, “Binky” frames him for murder, the fun begins. Forced to hide out in a mime school, Shakes discovers the identity of the real murderer. Shakes exposes him on Binky’s daytime TV cartoon show. Eventually, Shakes joins a support group and cleans up his life.

Despite it’s talented cast, including newcomers Tom Kenny and Adam Sandler, SHAKES THE CLOWN is not a funny movie. Bobcat Goldthwait has a long way to go as a comedy writer, actor and director. In addition to foul language is explicit urination and vomit. In one scene, Binky mocks the sacrament of communion by placing pretzels in the mouths of his sidekicks and blasphemously blessing them.