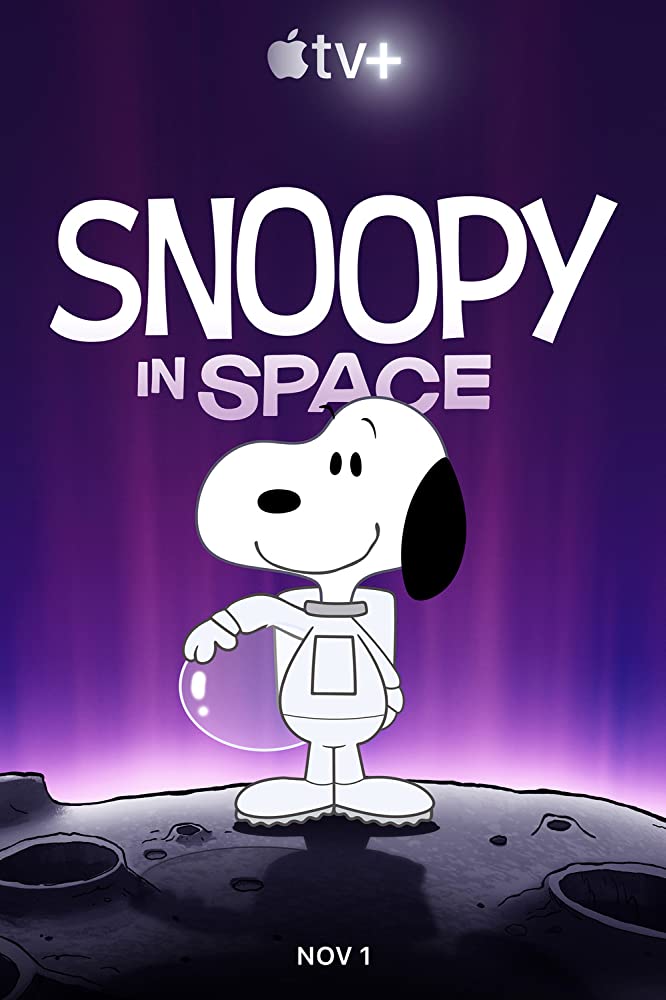 SNOOPY IN SPACE is an animated Apple TV original series inspired by Charles Schulz’s PEANUTS comic strip. In 12 short episodes, the series follows Snoopy’s journey to becoming a NASA astronaut, rocketing to the International Space Station, walking in space and traveling to the moon and back. SNOOPY IN SPACE is the product of a collaboration between Peanuts Worldwide and NASA to promote STEM science studies to children.

SNOPPY IN SPACE is highly enjoyable, funny, wholesome, and educational. The first season has a strong moral worldview stressing love, loyalty, friendship, helping others in trouble, hard work, encouraging other people, and lifelong learning. Some Peanuts fans may feel that Snoopy’s character has changed from the original cartoons by Charles Schulz. The often positive Snoopy now gets discouraged and sulks when things don’t go his way. However, much like the original stories, Snoopy is silly but adorable and loyal. He and his little yellow bird friend, Woodstock, may argue, but they are fast friends. Family viewers of all ages will enjoy SNOOPY IN SPACE. The slapstick cartoon violence is very light, funny and child-friendly.

(BBB, C, V, M): Dominant Worldview and Other Worldview Con-tent/Elements: Strong moral worldview with redemptive elements stresses love, loyalty, friendship, hard work, rescuing others in trouble, and encouragement
Foul Language:
No foul language
Violence:
Some light slapstick violence in some episodes such as prat-falls, characters knocked over, Snoopy falls into a moon crater, Snooper gets thrown out of school and a NASA building, Snoopy and Woodstock get lost on the moon, Snoopy and Woodstock fight over playing music, Woodstock gets knocked into a joystick to save the day, Snoopy saves Woodstock from being swept down a pool drain, a model rocket lands in the kite-eating tree, etc.
Sex:
No sexual content
Nudity:
No nudity
Alcohol Use:
No alcohol
Smoking and/or Drug Use and Abuse:
No smoking or drugs; and,
Miscellaneous Immorality:
Brief miscellaneous immorality as Snoopy sneaks into Space Camp, even though he was initially rejected, plus Linus makes a comment in one episode about the cosmos being infinite, but he means really, really super large.

OVERVIEW REVIEW: SNOOPY IN SPACE is an animated Apple TV+ original series inspired by Charles Schulz’s Peanuts comic strip. In 12 short episodes, the series follows Snoopy’s journey to becoming a NASA astronaut. SNOOPY IN SPACE is the product of a collaboration between Peanuts Worldwide and NASA to promote STEM studies (science, technology, engineering, and math) to students.

After attending a school presentation about space travel, Snoopy is determined to become an astronaut. NASA rejects Snoopy’s application to space camp, but Snoopy refuses to take “no” for an answer. When Snoopy sneaks into the Astronaut Training Facility during a field trip to NASA, he quickly discovers that becoming an astronaut is no easy task. With a bit of hard work, dedication and the help of his friends, can Snoopy become NASA’s newest recruit?

SNOOPY IN SPACE is rated TV-G. The content is wholly acceptable for children and families. The series also reflects a moral worldview that stresses love, loyalty, friendship, rescuing others in trouble, courage, and helping and encouraging one another. Snoopy and Woodstock often help, protect and stand up for one another during astronaut training and assignments. Snoopy also shows love and loyalty to a brokenhearted Charlie Brown by showing the boy that the beagle missed Charlie while away on a mission. Charlie Brown and friends also try to cheer up Snoopy when he’s sad.

SNOOPY IN SPACE has other redemptive elements. The series stresses the importance of hard work and not taking shortcuts. Snoopy learns he can’t cheat his way into becoming an astronaut. He studies and trains hard so he can achieve his dream. SNOOPY IN SPACE also highlights not getting discouraged while learning something new and challenging.

SNOOPY IN SPACE is also educational. Snoopy’s journey teaches viewers about astro-naut training, space travel and what astronauts do during their missions. Viewers also learn interesting facts about the Milky Way, the planets in our solar system, and historical space expeditions. As part of the collaboration with NASA, live historical footage is interspersed throughout the episodes. Viewers also receive a glimpse of current NASA projects and prototype rockets to Mars. The live NASA footage and interesting facts about space travel add to the program’s excitement.

SNOOPY IN SPACE is a highly enjoyable, funny series that features lovable and familiar characters. Some Peanuts fans may feel that Snoopy’s character has changed a bit from the original cartoons created by Charles Schulz. The often positive and helpful Snoopy now gets discouraged easily and sulks when things don’t go his way. However, much like the original stories, Snoopy is silly but adorable and loyal to his friends. Snoopy and his little yellow bird friend, Woodstock, may argue, but they are fast friends who enjoy their time together and help one another.

SNOOPY IN SPACE promotes many positive moral lessons and lifelong learning. Family viewers of all ages will enjoy SNOOPY IN SPACE.